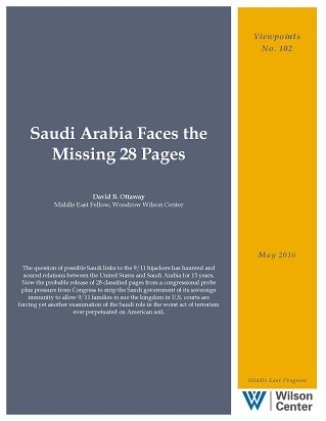 In December 2002, a joint Senate-House intelligence committee published its findings on the horrendous 9/11 terrorist attacks, which included evidence of possible links between the government of Saudi Arabia and some of the 15 Saudis involved in the bombings of the Pentagon and Twin Towers that cost nearly 3,000 American lives. For national security reasons, the 28 pages detailing that information were never published. But they may be shortly and revive yet another intense examination of alleged Saudi support for anti-American terrorism.

The famous missing pages, if now declassified, will likely put the former Saudi ambassador to Washington, Prince Bandar bin Sultan, and his wife, Haifa, back in the limelight. Some of the allegations after the attacks focused on the royal couple’s financial aid to the Saudi spouse of a student who appeared to have had contacts with two of the hijackers living in California, Nawaf al-Hazmi and Khalid al-Mihdhar, prior to 9/11. Bandar was a flamboyant, free-wheeling diplomat with endless wit and charm, who served as ambassador to the United States for 22 years. He was in Washington at the time of the hijackings and had to deal with the barrage of accusation in the media and Congress regarding official Saudi complicity in the 9/11 plot.

For fifteen years now, the issue of possible Saudi connection to al-Qaeda, the terrorist group that masterminded 9/11, has been a festering sore in the side of the U.S.-Saudi relationship that never seems to heal. In addition to the controversy over the 28 missing pages, U.S. courts have helped to keep it festering by ruling alternatively for and against the unrelenting campaign of 9/11 families to allow these courts to hold the Saudi government and its charities responsible by lifting their sovereign immunity. Now there is a bill in Congress to do just that, and on May 17, the Senate passed it unanimously by voice vote. Its fate in the House of Representatives remains uncertain, but the White House has indicated President Obama will likely veto the measure fearing tit-for-tat reaction by other nations against the United States.

Saudi Foreign Minister Adel al-Jubeir at first threatened the kingdom would withdraw $750 billion in assets invested in the United States to protect them from being frozen or seized. Later, however, he denied his government would ever resort to such a measure for political purposes. But he did warn that such a law would “cause investor confidence [in the United States] to shrink,” not just for Saudi Arabia “but for everybody.” Subsequently, as the result of a Bloomberg News Freedom of Information request, the U.S. Treasury Department on May 16 finally disclosed for the first time that Saudi holdings of U.S. treasuries amounted to $116.8 billion at the end of March—far less than expected—and only accounts to about 20 percent of the kingdom’s total $587 billion in foreign reserves.

But the most immediate threat to the kingdom’s good standing in Washington is the declassification and release of the 28 pages, and this may happen next month. It is a step the Saudi government has never opposed since the special 9/11 Commission report into the attacks found “no evidence that the Saudi government as an institution or senior officials individually” had funded al-Qaeda. But it also concluded that Saudi charities and private rich donors constituted “fertile fund-raising ground.”

Questions about possible Saudi government complicity in 9/11 have been kept alive by the victims’ families who have sought as much as $1 trillion in compensation with the continuous support of numerous Republicans and Democrats in Congress. At the outset, their lawsuit implicated even the current King Salman, as well as two former Saudi ambassadors to the United States: Prince Bandar and Prince Turki al-Faisal. U.S. courts have upheld their right to diplomatic immunity and thus excluded them as defendants in the lawsuit. They also took the side of the Saudi government for 13 years in its claim to sovereign immunity. But in June 2014, the U.S. Supreme Court ruled in favor of the 9/11 plaintiffs’ demand that the government be included. Then last September, U.S. District Court Judge George Daniels dismissed the kingdom as a defendant, this time on the basis there was insufficient evidence of any Saudi links to the terrorists.

There has been evidence that several Saudi charities funneled money to al-Qaeda even after 9/11, though whether the Saudi government knew what they were doing remains murky. Evidence of possible funding of al-Qaeda by Saudi individuals stemmed initially from a document known as the “Golden Chain,” seized by Bosnian police in a raid on a Saudi charity, the Benevolence International Foundation, in Sarajevo in March 2002. It listed a number of Saudi businessmen and bankers who had made donations to Osama bin Laden, al-Qaeda’s Saudi founder, during the war against Soviet occupiers of Afghanistan in the 1980s. There was no indication, however, they had funded his anti-American terrorist activities after the war ended in 1989.

Another of the Saudi charities implicated was the Saudi High Commission for Relief to Bosnia and Herzegovina based in Sarajevo, which was raided by NATO peacekeepers in February 2002. They found documents that raised suspicions that some of its officials had been involved in plotting al-Qaeda terrorist attacks including one against the U.S. embassy in the Bosnian capital. That particular charity had been founded in 1993 by the then Saudi governor of Riyadh, Prince Salman, who is today king.

But the charity that caused by far the most friction between the U.S. and Saudi governments after 9/11 was the al-Haramain Islamic Foundation. With headquarters in Riyadh and under the supervision of the Islamic Affairs Ministry, al-Haramain once had branches in 50 countries, including one in the United States where its office was in Ashland, Oregon. This charity did both missionary and social service work through an annual budget of $40 million to $60 million.

By early 2003, the U.S. government had identified 20 al-Haramain offices where some of their officials were “aiding and abetting al-Qaeda and its affiliated groups,” according to the Monograph on Terrorist Financing, published by the 9/11 Commission in conjunction with its 2004 report, the most exhaustive and authoritative one on the attacks. The United States had had to present the Saudi government with specific evidence of each branch’s complicity with al-Qaeda before the Saudis would take action to close it. Only in January 2004, well over two years after the attacks, was the al-Haramain headquarters in Riyadh finally shuttered and its director sacked.

Far more embarrassing to the Saudis have been those verified reports that Bandar and his wife provided money to the spouse of a Saudi student suspected of contacts with two of the 9/11 hijackers. Altogether, Bandar, Haifa, and a Saudi embassy medical office provided Majeda Dweikat, the ailing wife of Osama Basnan, $140,000 over a period of four years to help meet her medical expenses. After the FBI interrogated the couple, they were deported. Later, the 9/11 Commission’s Monograph on Terrorist Financing said it had found no evidence that Basnan or another suspected Saudi , Omar al-Bayoumi, had provided any money to the two hijackers. But the report said there was some evidence a third Saudi student, Yazeed al-Salmi, might have provided $1,900 to the hijacker Hazmi. He had been interrogated by the FBI and deported too.

The co-chairmen of the 9/11 Commission—former Democrat House Foreign Affairs Chairman Lee Hamilton and onetime Republican New Jersey Governor Thomas Kean—issued a statement on April 22 detailing how they had handled the allegations of Saudi complicity contained in the 28 pages. They said the commission had established a special team of investigators that included the person who had drafted the 28 pages. The team had spent 18 months tracking down all the allegations of Saudi links to the 9/11 hijackers. Only one Saudi official had been “implicated,” Fahad al-Thumairy, an employee of the Ministry of Islamic Affairs and imam at a Saudi-built mosque in Los Angles. He had been interviewed by both the commission and FBI in Saudi Arabia after he left the United States. The commission had not been able to verify he had provided any aid to the two hijackers, but he remained what Hamilton and Kean in their joint statement called “a person of interest.”

As for Saudi Ambassador Prince Bandar, his troubles only grew worse. The FBI and Treasury Department were next led to investigate the flow of tens of millions of dollars through his and his wife’s multiple accounts in Riggs Bank in Washington, D.C. They discovered the prestigious bank, used by scores of embassies and diplomats, had failed to file with the Treasury Department as required by U.S. law so-called “suspicious activity reports” on any of these transactions. Then, all of the Saudi embassy bank accounts were subsequently seized for examination in an effort to track the massive flow of dollars, which in Haifa’s case amounted to $36 million in withdrawals over 2001 and 2002.

The results of the probe were never made public, but they triggered a wider investigation of Riggs activities that led to its sale to PNC Financial Services in 2004 after pleading guilty to money-laundering laws also on behalf of Chile’s former dictator, Augusto Pinochet, and Equatorial Guinea’s president, Teodoro Obiang Nguema Mbasogo. The following year, Bandar’s decades-long career as ambassador to the United States also came to an end.

In the end, the airing of allegations contained in the 28 pages is unlikely to overturn the findings of the 9/11 commission regarding Saudi involvement in the 9/11 plot. But it will doubtlessly pour more salt on the festering wound over this issue in the already-strained U.S.-Saudi relationship. And it will likely provide added fuel to those in Congress arguing that Saudi Arabia’s ultra-fundamentalist brand of Islam has been a prime cause of the rise of the Islamic State, with which the United States is now at war. 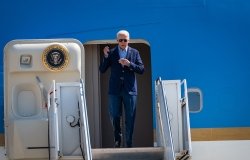 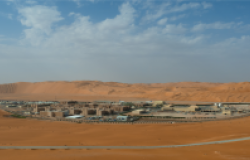 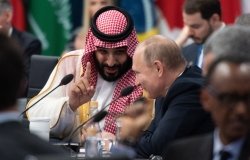