Saudis Wield the Sword at Home as Abroad 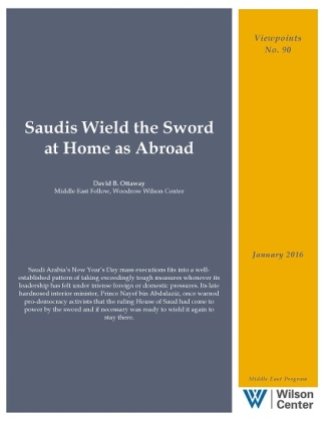 In March 2004, Prince Nayef bin Abdul-Aziz Al Saud, the late hardnosed interior minister, called in a dozen liberal Saudis agitating for political reforms for a lesson in Saudi civic history: “We came to power by the sword,” he told them referring to how the ruling House of Saud had united the kingdom in 1923. “If we have to, we will remain in power by the sword.”

On New Year’s Day 2016, the Saudis showed their resolve to do just that, executing by the sword and firing squads 41 Sunni Saudi and two foreign operatives of al-Qaeda in the Arabian Peninsula (AQAP) held responsible for multiple terrorist attacks and killings inside the kingdom a decade ago. Also dispatched were four Shi’ite Saudi activists, including the fiery religious preacher Sheikh Nimr al-Nimr.

The decision to carry out such a mass execution has only been taken once before in contemporary Saudi history when the government dispatched 63 Saudi religious extremists for participating in the takeover of the Grand Mosque in Mecca in 1979. That year also marked the triumph of Ayatollah Khomeini’s Islamic Revolution that toppled the Shah of Iran and set off the bitter Iranian-Saudi rivalry for power across the Middle East. Iran has postured itself ever since as the protector of the Arab world’s minority Shi’ite population and Saudi Arabia that of its majority Sunnis.

The question is why the Saudis decided to carry out the executions now when neither the minority Shi’ite population, accounting for only 10 to15 percent of the kingdom’s 20 million citizens, nor the dormant AQAP pose a serious threat to the Saudi monarchy.

The most likely explanation for the inflammatory Saudi decision is that the leadership feels under significant foreign and domestic pressure, reacting by taking excessive measures just as it has in the past under similar circumstances. Prince Nayef’s 2004 warning to Saudi reformers came in the midst of an intense U.S. campaign for democratic reforms in the kingdom. President George W. Bush had launched his “Forward Strategy of Freedom” aimed at Middle East autocracies and publicly called on Saudi rulers to undertake meaningful steps toward democracy.

In response, the Saudis arrested 11 leading academics and activists who had peacefully petitioned the late King Abdullah to move toward a constitutional monarchy. Most of them recanted and were freed, but three who refused were sentenced to six to nine years in prison. None was executed but the incipient Saudi reform movement, at one point encouraged by the late King Abdullah, came to an abrupt halt.

Similar draconian measures were taken to abort plans for a large public protest by pro-democracy activists in March 2011 in the wake of uprisings in other Arab countries. The government mobilized the religious establishment to condemn all protests as religiously forbidden and made clear any Saudi protester would be arrested. Some Shi’ites in the Eastern Province nevertheless took to the streets, influenced by Sheikh Nimr’s denunciations of Saudi rule and his call for secession of the Eastern Province. But only one Sunni demonstrator turned out in Riyadh and again the reform movement was quashed.

Nimr’s execution was bound to inflame sectarian tensions across the Middle East and provoke an international uproar. It has also led Saudi Arabia to break diplomatic relations with Tehran after Iranian hardliners sacked and burned the Saudi embassy there. In addition, there is ever likelihood of an escalation in their proxy wars underway in Syria and Yemen, making U.S.-backed and UN-sponsored peace negotiations to end those conflicts far more difficult.

The Saudis are particularly upset over the U.S. role in facilitating Tehran’s exit from the international cold as a payoff for its agreement to substantially curb its nuclear program. They are fuming in particular at Washington’s insistence that Shi’ite Iran should now be given a place at the negotiating table to help decide the fate of Syrian President Bashar al-Assad, whom the Saudis view as Iran’s pawn in the Levant and chief cause for the rise of the Islamic State, or ISIS. At the same time, Washington is pressing the Saudis to abandon their fixation on Iran in favor of the Obama administration’s own priority of defeating ISIS.

The executions also come at a time when Saudi Arabia has undertaken its first major endeavor to project the kingdom’s untested military power abroad. It is leading a coalition of nine Sunni Arab states in a risky venture to crush Iranian-backed Houthi rebels in neighboring Yemen. After nine months of warfare, a clear Saudi military victory still remains elusive.

One day after the mass executions, the Saudis announced they were ending an already much-violated temporary ceasefire in Yemen. They immediately resumed the heavy bombing of Houthi positions and the coalition’s ground offensive. The Saudi New Year’s message to the outside world: we intend to hang tough abroad as well as at home.

The mass executions may well generate even more problems on both fronts for the untested leadership of King Salman, who has been in power less than a year, and his hawkish 30-year-old son and defense minister, Prince Mohammed bin Salman. But like the late interior minister, Prince Nayef, they seem determined to wield the sword to protect the House of Saud no matter the cost.

AQAP has promised to retaliate either by reviving its terrorist activities inside the kingdom or more likely by attacking Saudi forces fighting in Yemen. AQAP controls a large swath of territory in southeastern Yemen but has refrained so far from challenging the Saudi-led coalition.

On the other hand, the reaction of Saudi Shi’ites, who are concentrated in the kingdom’s oil-rich Eastern Province where Sheikh Nimr lived, is more difficult to assess. Two Shi’ite leaders in Qatif, the main city there, told this visitor last month that the situation was explosive due to fears for Nimr’s execution. “The people will take the initiative, not our leaders,” said Mohamed Mafouz, a local scholar. “It will be out of control.”

So far, there have been street protests, but no explosion. One reason for the relatively subdued reaction may be that Saudi Shi’ites have come to realize they share a common enemy with the ruling House of Saud in the Islamic State. Since last May, its terrorists have taken to targeting Shi’ite mosques and meeting halls in the Eastern Province in an apparent attempt to heighten already serious sectarian tensions in the kingdom. To date, 45 Shi’ites have died in four ISIS terrorist attacks.

ISIS has been steadily expanding its presence and activities across the kingdom. In November, the Islamic State’s self-proclaimed caliph, Abu Bakr al-Baghdadi, called upon his followers in Saudi Arabia to “Draw your swords” and cut off the heads of the al-Sauds. It carried out 17 attacks resulting in the deaths of 67 security officials and civilians last year, according to Ministry of Interior spokesman Brig. Gen. Mansour al-Turki. He said that ISIS had ordered its Saudi followers “to stay where you are” rather than go to Syria or Iraq to fight and organize logistical support for its terrorist activities.

Last year, Saudi security forces apprehended 800 ISIS suspects. It was not clear how many of them were among the 690 Saudis who are known to have returned from fighting in Syria or Iraq. Altogether, 5,100 terrorists, or suspected ones, are currently in prison, according to al-Turki.

The Ministry of Interior spokesman expressed confidence the government had the ISIS threat in hand largely due to tips from the Saudi public regarding the whereabouts of their operatives and clandestine cells. Many of these tips, he said, were coming from worried parents of sons (and some daughters) who feared for their children’s lives.

That the Saudis are concerned about ISIS’s drawing power among the kingdom’s youth was made clear by al-Turki the day of the mass executions. He explicitly warned young Saudis not to be fooled into being used as mere ISIS “tools” to undermine the country’s security and stability. It remains to be seen whether the executions will act as an effective deterrent to block the rise of ISIS inside the kingdom.