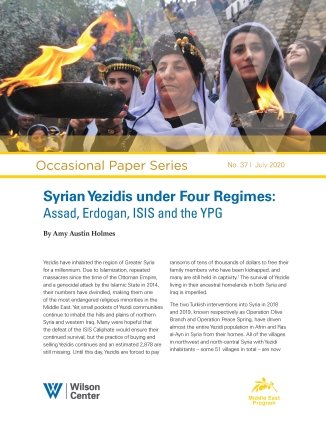 Yezidis are one of the most endangered religious minorities in the Middle East. Islamization, centuries of discrimination and massacres, and a genocidal attack waged by Islamic State in Sinjar, Iraq in 2014 threatens their survival as a people. In Syria, Yezidis living in their ancestral homelands have experienced rule under four different regimes since 2012: the Syrian Baathist regime, the Islamic State, the Kurdish-led self-government known as the Autonomous Administration of North and East Syria (AANES), and now the Turkish occupation initiated by Operation Olive Branch and Operation Peace Spring. The author compares the treatment of Syrian Yezidis under each of these four governments and the impact on their effort to reclaim and rebuild their ancient communities. In her conclusion, the author proposes recommendations for United States policymakers as Syrian Yezidis are presently faced with forced demographic change under Turkish occupation, and need international support to rebuild and preserve their heritage.