Skip to main content
Support
Explore More
Close
Blog post
Economics and Globalization
The Mayor of Colombo, Sri Lanka, Says the Capital City Only Has Enough Food to Last Until September
By Ambassador Mark Green on August 16, 2022
Share on FacebookShare on TwitterShare via Email
Share
Part of the Asia Program Special Reports
Publication

The Evolution of a Taiwanese National Identity 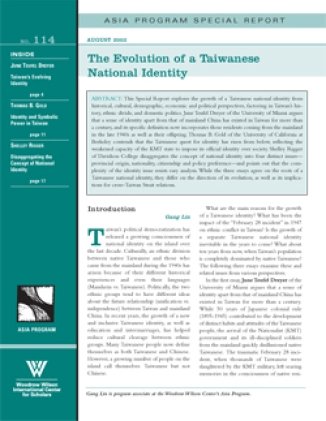 This Special Report explores the growth of a Taiwanese national identity from historical, cultural, demographic, economic and political perspectives, factoring in Taiwan’s history, ethnic divide, and domestic politics. June Teufel Dreyer of the University of Miami argues that a sense of identity apart from that of mainland China has existed in Taiwan for more than a century, and its specific definition now incorporates those residents coming from the mainland in the late 1940s as well as their offspring.Thomas B. Gold of the University of California at Berkeley contends that the Taiwanese quest for identity has risen from below, reflecting the weakened capacity of the KMT state to impose its official identity over society. Shelley Rigger of Davidson College disaggregates the concept of national identity into four distinct issues— provincial origin, nationality, citizenship and policy preference—and points out that the complexity of the identity issue resists easy analysis.While the three essays agree on the roots of a Taiwanese national identity, they differ on the direction of its evolution, as well as its implications for cross–Taiwan Strait relations.