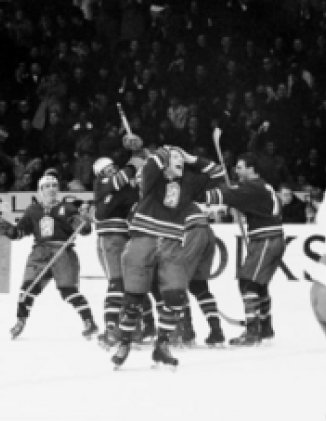 It is often forgotten that, after the Soviet invasion of 1968, communist leader Alexander Dubček and several of his reformist associates actually retained their positions, albeit with sharply circumscribed powers after they had been compelled to sign an agreement with Soviet leaders (the “Moscow Protocol”) vowing to preserve socialism and limit reforms. 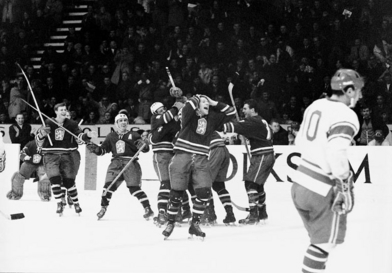 It was only seven months later that the Soviets instituted what became known as the “normalization” process, replacing Dubček and other lingering reformers with hardliners and instituting tougher domestic policies that would last for two decades, and the proximate cause was…hockey. On March 28, 1969, the Czechoslovak national team defeated the Soviets at the world championships in Stockholm (where they had been moved from Prague). Throughout the country, Czechoslovaks took to the streets, celebrating the victory—and often taunting the Soviet occupiers, venting their resentment in a massive, nationwide spontaneous display of nationalistic and anti-Soviet feeling that would not be replicated until the “Velvet Revolution” in November 1989. The clear evidence that the holdovers from the Prague Spring were neither willing nor able to impose the proper attitudes of comradely friendship and deference toward the Soviet overlords not only appalled Kremlin leaders but prompted them to move briskly to finish the job they had started in August.

The International Ice Hockey Federation (IIHF) initially scheduled the 1969 world championships for Prague to commemorate the sixtieth anniversary of hockey in Czechoslovakia. But in September 1968 Prague announced that it could not host the tournament because of “technical, economic and organizational conditions.” The US “embassy thought real concern was for prospective crowd behavior at Czechoslovakia-USSR matches.”[1] When the tournament was played in Stockholm, it had serious political repercussions. Czechoslovakia defeated the USSR twice in the course of the tournament. After the first victory, Kenneth Skoug Jr. of the US embassy reported a “modest demonstration” in Wenceslas Square which led to some arrests and otherwise might have gone unnoticed had newspapers not publicized it “and, most unusually in a Communist country, revealed a few statements of the culprits, such as ‘No tanks were there so they lost.’ In standard Communist practice, assertions by defendants would be published only if abject confessions of guilt.”[2] The apparent reason for the regime’s willingness to publicize these comments became clear when the Czechoslovaks defeated the Soviets a second time, on 28 March. Crowds in Czechoslovakia celebrated the victory; some chanted “Russians go home!” or “Today Tarasov [the Soviet ice hockey coach—ed.], tomorrow Brezhnev.”[3] One of the slogans was “Czechoslovakia 4 – Occupation forces 3!”[4] US diplomat Skoug reported that he “had never seen Czechs so happy. Clearly, the city had not experienced such joy since the defeat of the Nazis in 1945.”[5]

Crowds in Czechoslovakia celebrated the victory; some chanted “Russians go home!” ....US diplomat Skoug reported that he “had never seen Czechs so happy. Clearly, the city had not experienced such joy since the defeat of the Nazis in 1945.”

This second game had a political impact that stemmed from an attack on the Aeroflot and Intourist offices in Prague. This episode happened during the post-game celebrations, and it helped to finally topple Aleksandr Dubček, the reformist Czechoslovak leader who remained in power even after the invasion. Dubček reported that “a team of police agents under cover as city workers” – he identified their supervisor as “the Czech minister of the interior, Josef Groesser, a Soviet agent” – “had unloaded a heap of paving stones in front of the offices.”[6] Skoug pointed out that there had been little vandalism directed against the Soviets during and after the invasion. Following the second hockey game, though, he “saw burly men, none of whom looked the least bit like students, unhurriedly and dispassionately hurling large paving stones through the windows of . . . Aeroflot. No police appeared until the store windows had been completely shattered. They took no apparent action.”[7] And “[a]lthough Groesser said the initiators of the ‘vandalism’ would be discovered and brought to justice, this never happened, and his promised report was never published.” Despite all of this, “a number of journalists and historians, none of whom witnessed the event, reported having heard eyewitness accounts of provocation but were reluctant to endorse it.”[8]Pravda, which blamed a different group of provocateurs, was likely accurate when it wrote that “the provocations that took place in Prague”[9] had been “planned in advance and had far-reaching political objectives.”[10]

The political outcome of the riot in Prague was that Czechoslovak hardliners had a pretext to bring a final end to Dubček’s tenure in office. The Kremlin provided an elaborate explanation of the riots. It claimed that the repeal of Prague Spring reforms after the Soviet invasion had been “favorably received by the working class, the toilers in agriculture and the majority of the working people.” Despite the purported popularity of the post-August 1968 repeal of reforms, though, “forces hostile to socialism” and “right-wing revisionist and counterrevolutionary elements” were “fanning a nationalistic psychosis.”[11] They were “whipping up anti-Sovietism”[12] and encouraging events of “a clearly terroristic and counterrevolutionary character.”[13] Interestingly, among the evidence of this purported counterrevolutionary Czechoslovak activity were the uniforms of the Czechoslovak hockey team: “for the first time in recent years,” they “did not show the name of their socialist homeland. Only the seal depicting a lion remained.” The Soviets also complained about the “poorly disguised gesture made by Czechoslovak television, which organized a long period of ‘interference’ on the screen when the Soviet national anthem was played after the USSR team’s victory over the Canadians.”[14]

Demonstrating the zeal with which the Soviets made their case for intervention in Czechoslovakia, in one diplomatic conversation a Soviet official spun out what his American counterpart considered “a bizarre fantasy” of events in 1968: that a “subversive anti-Party ‘group’” had been “consciously stirring up trouble” in Czechoslovakia and was planning to take over the Communist Party at an upcoming Party Congress, “and to withdraw from the Warsaw Pact.” Acting “in cahoots with agents of” West Germany, these renegade Czechoslovaks were even planning for “the eventual formation of a ‘third force’ alliance in Central Europe, independent of both the USSR and the US”[15] This Soviet position – that counterrevolutionaries were running wild in Czechoslovakia and being encouraged by Western, and West German, agents – justified the August 1968 invasion, and in April 1969 demanded a change in leadership in Prague. Dubček, who had kept his position following the invasion, albeit with many limitations, was finally removed from power after the hockey riots.