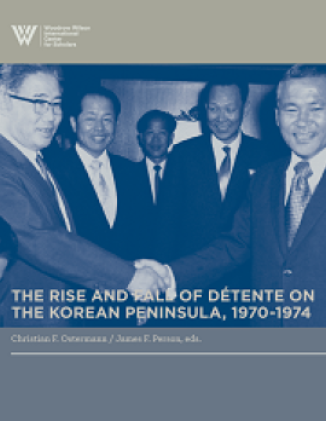 The Rise and Fall of Détente on the Korean Peninsula, 1970-1974 features the transcript of the second in a series of critical oral history conferences jointly convened by the Woodrow Wilson International Center for Scholars’ North Korea International Documentation Project and the University of North Korean Studies and a selection of primary source documents.

In July 2010, the Woodrow Wilson Center’s History & Public Policy Program (North Korea International Documentation Project) and the University of North Korean Studies convened their second in a series of critical oral history conferences at the Wilson Center in Washington, DC. For the first and perhaps last time, a group of veteran diplomatic and intelligence officials from the Republic of Korea, the United States, and the former communist bloc, all active in Korean affairs in the early 1970s, assembled with a small group of scholars in an effort to provide context to, and fill gaps in, the available documentary record. The Rise and Fall of Détente on the Korean Peninsula, 1970-1974 is the result of that historic conference and features extended and probing discussions on the rise and demise of the inter-Korean dialogue, South Korea’s changing relationship with the United States, and North Korea’s position within the communist bloc during the era of détente.

The proceedings revealed the following findings:

Twenty-two documents, obtained from archives in South Korea, Hungary, Romania, (East) Germany, Bulgaria, Albania, and the United States accompany the conference transcript and provide additional context and evidence on this period in inter-Korean, U.S.-Korean, and DPRK-socialist bloc relations. Among the most noteworthy documents in the collection are newly obtained and translated conversation between Kim Il Sung and foreign heads of state, including Romania’s Nicolae Ceausescu and Bulgaria’s Todor Zhivkov. In his 1971 conversation with Ceausescu, Kim Il Sung described his new policy of peaceful reunification, premised on the belief that South Korea was on the verge of revolution. In his 1973 conversation with Zhivkov, the North Korean leader expressed his frustrations with Chinese foreign and domestic policies.

The Rise and Fall of Détente on the Korean Peninsula, 1970-1974 is available online at no cost. To receive a free copy of the book in print, please send your name and mailing address to nkidp@wilsoncenter.org.