The War on ISIS: U.S. Success without a Payoff 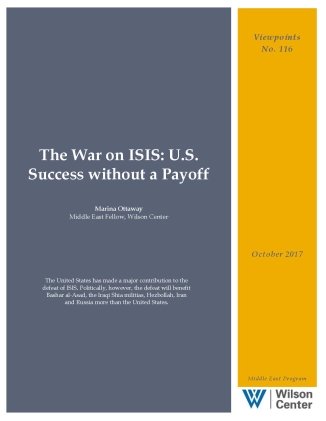 The defeat of ISIS as a territory-controlling organization could not have taken place without U.S. intervention. In Iraq, the United States helped rebuild effective units in a military that was demoralized after ISIS’ victories in 2014 and in disarray after years of political maneuvering at the expense of military preparedness. To be sure, it was the Iraqi military, the Kurdish pesh merga, the Shite Popular Mobilization Units, including those financed and supported by Iran, that did the fighting and took the casualties in Iraq, but it was the United States that provided weapons and training and bombed ISIS positions. In Syria, it was the United States that stood up Kurdish units, under the thin umbrella of the Syrian Democratic Forces, and unleashed them on the Islamic State.

By focusing single-mindedly on liberating territory, while postponing a serious discussion of what comes next, the United States has strengthened the grip on Syria of President Bashar al-Assad, whom the United States once wanted to overthrow, and increased the influence of Iran, the Shite Popular Mobilization Units it supports, Hezbollah, and Russia. The position of Iraqi Prime Minister Haider al-Abadi, whom Washington supports, is less tenuous than in the past, but he still faces a strong challenge from Shia factions close to Iran and has not gained the confidence and support of the region’s Sunni regimes. The possibility that Iran will be able to establish a land bridge to the Mediterranean no longer appears remote. As for the greatest challenge, rebuilding Syria and Iraq into functioning states, Washington has so far not offered anything beyond the worn mantra of national unity under an inclusive government. Days before a long-announced referendum on independence in Iraqi Kurdistan on September 25, Special Presidential Envoy Brett McGurk was still preaching to the Kurdish leadership that the problem should be solved through dialogue and negotiations instead, without acknowledging that this approach has failed for over 12 years. Nor did Washington offer any new ideas after the referendum showed that almost 93 percent of Kurds want independence.

Perhaps the most striking aspect of the present situation is that U.S. intervention has not generated the good will of any of the factions fighting in Syria and Iraq. Intervention against ISIS has not given the United States the raw power to impose its control on the region, as the invasion of 2003 did in Iraq. This is the result of a deliberate policy not to put troops on the ground but to train and support local forces instead. But the U.S. contribution to the defeat of the caliphate has not increased U.S. influence, either. The United States remains an outsider, unwelcome or barely accepted, in Iraq. By contrast, Iran has embedded itself in the country through the Shia militias, some of which it started arming and training as far back as the 1980-88 Iran-Iraq war. Those militias have repeatedly declared that U.S. presence should end as soon as the caliphate ceases to exist. Iraqi Kurds, who would like to embrace the United States and be embraced by it, are upset by Washington’s outright rejection of the independence referendum. The Syrian Kurds, so far Washington’s only effective allies in Syria, are likely to face their own crisis as fighting against ISIS winds down and Syrian government troops move in territory once held by the caliphate, as they are already doing in Der Ezzor.

It will be extremely difficult for the United States to build on the success against ISIS to strengthen its position if its vision for the region remains divorced from local demands and local reality. The problem is that while Iran and Russia are offering important local actors something they really want, Washington is not. Russia is keeping al-Assad in power, and, by supporting the militias, Iran consolidates the Shia grip on Iraq despite their internal divisions and the weakness of their governance system. The United States only offers its own vision, while rejecting most goals of local groups. Assad does not want inclusive governance, he wants to rule. Iraq Shias have given no indication that they want power-sharing. Iraqi Kurds want independence but the U.S. opposes it. It is not clear what Syrian Kurds, or Iraqi Sunnis, want in the long run, but it is certainly more than the hope that the central governments of their countries will suddenly become enlightened.

The dilemma for the United States is a major one. It certainly should not try to gain influence by supporting a dictator or encouraging domination of Iraq by one sect. But it will never gain influence by preaching solutions divorced from local reality and local demands. This is why the U.S. contribution to the defeat of the ISIS caliphate is now furthering the goals of its adversaries more than its own.