Skip to main content
Support
Show
Live Now
The Black Republic: African Americans and the Fate of Haiti
Explore More
Close
Event
U.S. Strategy in the Asia-Pacific Region
On Monday, May 5, 2003 at 8:00 – 5:00 ET
Share on FacebookShare on TwitterShare via Email
Share
Part of the Asia Program Publications
Publication 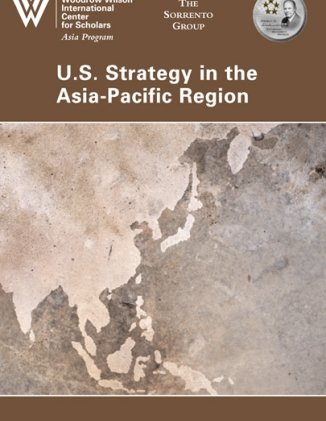 By Robert Hathaway
Security and DefenseAsia

It is time to rethink America’s strategic vision for Asia. The next decade will bring far-reaching challenges for U.S. strategy in the Asia-Pacific region. The terrorist attacks of September 11, 2001, and the subsequent war against terrorism have underlined that reality. But the need for serious reconsideration of America’s posture in Asia predates 9/11.

On May 5, 2003, the Woodrow Wilson International Center for Scholars and The Sorrento Group hosted a daylong conference to promote thinking about U.S. strategy in the Asia-Pacific region over the next eight to ten years. Attended by senior U.S. military officers, former policy makers and government officials, and leading academic experts, this program was part of the Dwight D. Eisenhower National Security Series, organized by the U.S. Army to stimulate more systematic consideration of future national security problems.

In a wide-ranging discussion, conference attendees looked more closely at the nature of American interests in the Asia-Pacific region, likely threats to those interests, and the best ways to counter or at least mitigate those threats. Some of the nation’s most eminent strategists, scholars and diplomats pursued broad strategic questions, some of which are detailed in this report.