Skip to main content
Support
Explore More
Close
Article
Economics and Globalization
Life on the Ground in Iran: From the View of the People
By Tara Rahmani on June 9, 2021
Share on FacebookShare on TwitterShare via Email
Share
Part of the Viewpoints Series
Publication

Watch out Washington, the Saudi Hawks are in Ascendancy 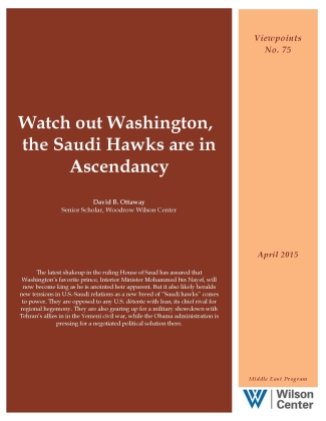 The latest shakeup in the ruling House of Saud has assured that Washington’s favorite prince, Interior Minister Mohammed bin Nayef, will now become king as he is anointed heir apparent. But it also likely heralds new tensions in U.S.-Saudi relations as a new breed of “Saudi hawks” comes to power. They are opposed to any U.S. détente with Iran, its chief rival for regional hegemony. They are also gearing up for a military showdown with Tehran’s allies in in the Yemeni civil war, while the Obama administration is pressing for a negotiated political solution there.