Weapons Are Not the Answer to Ukraine’s Military Woes 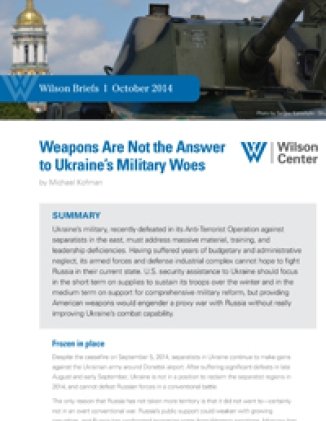 Ukraine’s military, recently defeated in its Anti-Terrorist Operation against separatists in the east, must address massive materiel, training, and leadership deficiencies. Having suffered years of budgetary and administrative neglect, its armed forces and defense industrial complex cannot hope to fight Russia in their current state. U.S. security assistance to Ukraine should focus in the short term on supplies to sustain its troops over the winter and in the medium term on support for comprehensive military reform, but providing American weapons would engender a proxy war with Russia without really improving Ukraine’s combat capability.

Weapons Are Not the Answers to Ukraine's Military Woes