Skip to main content
Support
Explore More
Close
Event
Governance
The Challenges of the Contemporary Administrative State: Brazil and the United States in Comparative Perspective
On Wednesday, May 23, 2018 at 9:00 – 6:00 ET
Share on FacebookShare on TwitterShare via Email
Share
Part of the Brazil Institute Event Summaries
Publication

Workshop Report | The Challenges of the Contemporary Administrative State: Brazil and the United States in Comparative Perspective 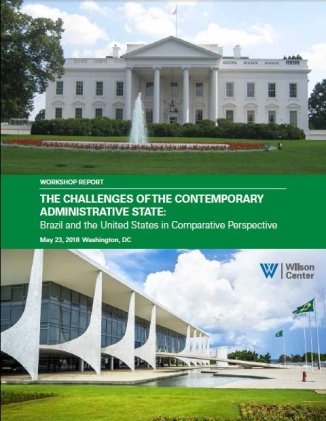 Brazil and the United States are both currently in the midst of crises of the administrative state. Although the nature of the crises and their origins differs, there is a great deal to learn from a comparative analysis of both countries during this moment of uncertainty. On May 23, 2018, the Wilson Center’s Brazil Institute and Brazil’s National School of Public Administration hosted a full-day workshop in Washington, DC, to explore the experiences of scholars and policy practitioners from both countries and gain a better sense for how each country can strengthen public administration and management to more effectively carry out the critical work of government.

The full workshop report is available for download above in English (for the Portuguese, click here). The powerpoints from the workshop are available on the event page.

Key Takeaways from the Workshop Report

Public administration is the lynchpin between a government’s mission and its actual impact. Yet governments around the world frequently struggle to implement more effective and efficient administrative and management processes. Most U.S. political analysts are acutely aware of the current challenges to effective public administration in Washington, from negotiating and passing annual budgets to effectively managing the various agencies and their large federal workforces. Brazil is similarly confronting the challenges of rising deficits and an often unwieldy bureaucracy as it seeks to overcome the profound political crisis and deep economic recession of the last four years. There has been growing dissatisfaction in each country over the government’s ability to manage global challenges and domestic problems, and although politicians have capitalized on problems to win elections, once in office they have failed to adequately address them. Public trust in institutions has fallen and faith in democracy has diminished. Although their histories diverge in several critical ways, Brazil and the United States are the two largest democracies in the Western Hemisphere, and there are valuable lessons to be learned through comparing the current administrative environments in both countries.

Several key themes and best practices emerged from the workshop presentations and discussions:

Every aspect of public administration should be viewed through a strategic lens. The purpose of the administrative state is to develop and implement policies that reflect the government’s priorities and serve its citizens. As the OECD recommends, a strategic systems approach requires viewing “the entire operation of government as an interconnected system rather than disparate pieces.”  This means that interagency cooperation should be prioritized, as well as cooperation within agencies, to ensure all parts of the government are working together towards strategic objectives. It also means that individual government functions should be considered strategically.

As the world rapidly changes, the administrative state needs to adjust, adapt, and innovate to meet new demands and opportunities.

Workshop participants concluded that the administrative state must work to maintain its relevance in an ever-changing and complicated world, through building public trust, serving as a steward for the resources of government, and promoting sustainable and inclusive development. The ongoing administrative challenges in Brazil and the United States only underscore the fundamental role that public administration plays in a government’s ability to meet its objectives and serve its citizens. 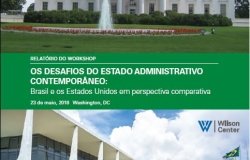