ON THE MAP: This map illustrates the airstrikes in June by location and concentration. 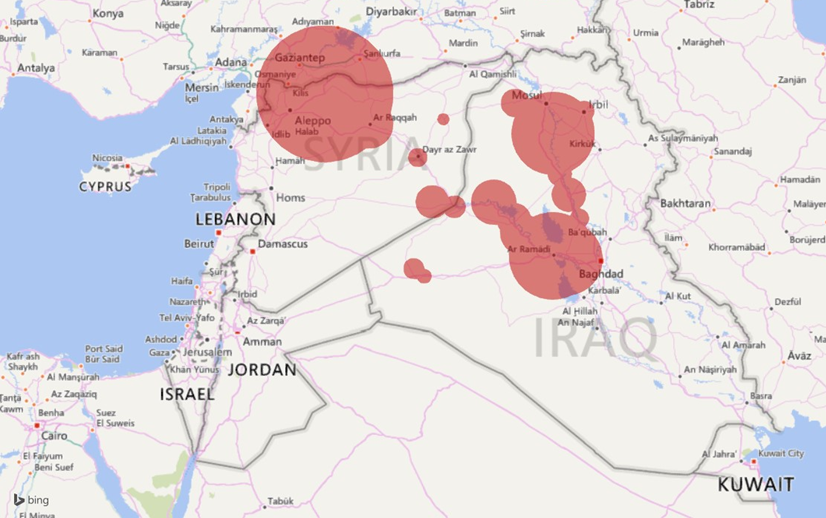 In June, U.S. and coalition airstrikes against the Islamic State – also known as ISIS, ISIL, or Daesh – declined slightly in Iraq compared to the previous month. But airstrikes in Syria doubled, jumping from 177 in May to 358 in June.

In Iraq, the U.S.-led coalition conducted 74 airstrikes in Fallujah in support of Iraqi forces. ISIS suffered a major setback on June 26 when Iraqi forces seized the city, which it had held since early 2014. “Despite the hard work still to do, the clearing of Fallujah will make the people of Iraq safer and bring us all one step closer to dealing ISIL a lasting defeat,” Secretary of Defense Ashton Carter said in a statement. Qayyarah, however, was the most frequent target of U.S. and coalition airstrikes in Iraq, accounting for 104 airstrikes in June. Qayyarah is significant due to its proximity to Mosul, one of ISIS’s key strongholds.

In Syria, most of the U.S. and coalition airstrikes targeted Manbij, accounting for 71 percent of the airstrikes in June. By June 10, U.S.-backed forces had seized the last major entrance route to the city. Manbij has served as a “locus of ISIL’s foreign fighter and external plotting network,” according to Brett McGurk, Special Presidential Envoy for the Global Coalition to Counter ISIL, on June 28. He added that the Manbij operation is “on track to succeed.”

Despite ISIS’s setbacks within the borders of its so-called caliphate, its supporters and affiliates escalated attacks in other parts of the world during the Muslim holy month of Ramadan, which ran from June 5 to July 5. In late May, ISIS released a message calling for a “month of calamity” and called Ramadan “the month of conquest and jihad.” On June 12, a gunman who pledged allegiance to ISIS attacked a nightclub in Orlando, Florida and killed more than four dozen people. In late June and early July, ISIS inspired or directed deadly attacks in Turkey, Jordan, Yemen, Saudi Arabia, and Bangladesh.

The following graphics illustrate key data points and trends in the air campaign as of June 2016.

COMPARATIVE TRENDS: Around 40 percent of the U.S. and coalition airstrikes in June targeted Syria, reaching their highest point since July 2015.

TRENDS IN IRAQ: In Iraq, 22 percent of the airstrikes in June targeted Qayyarah, and around 20 percent targeted Mosul. Fallujah was the third most frequent target, accounting for around 16 percent of U.S. and coalition airstrikes in Iraq.

TRENDS IN SYRIA: In Syria, U.S. and coalition airstrikes heavily targeted Manbij, accounting for 254 airstrikes in June, or 71 percent of the total in Syria.

COST: By May 2016, the United States had spent 7.5 billion on Operation Inherent Resolve, averaging around $11.7 million per day.

U.S./COALITION AIRSTRIKES: Between August 2014 and June 2016, the United States conducted 76 percent of the airstrikes in Iraq and Syria. Coalition partners conducted the remaining 24 percent.