Skip to main content
Support
Explore More
Close
Publication
Conflict Resolution and Peacebuilding
A Mexican Utopia: The Rule of Law is Possible
Share on FacebookShare on TwitterShare via Email
SharePrint
Part of the The Expert Take
Article

In this Expert Take, Arturo Franco discusses the benefits of creating a merit-based society in Mexico. This view is presented as an alternate "Mexican Utopia" to the one portrayed in Luis Rubio's recently published book "A Mexican Utopia: The Rule of Law is Possible."

"My impression from four decades of observing eight Mexican presidents is that when a president assumes office and, above all, when he consolidates his power, he feels that the world owes him a living,” writes Luis Rubio, one of the most respected intellectuals of our country. For the renowned columnist, since the late eighties, the fate of Mexico has depended heavily on the political ability of those who have occupied the presidency. "Each of them believed that their projects would last," Rubio writes in his recently published monograph: A Mexican Utopia: The Rule of Law is Possible.

A global fellow at the Wilson Center’s Mexico Institute, and the president of the Center for Development Research, Rubio clearly shows how Mexico lives in the "gray zone of democracy" —characterized, in turn, by political scientist Thomas Carothers—, as a system where: "democracy remains shallow and troubled. Political participation, though broad at election time, extends little beyond voting. Political elites from all the major parties or groupings are widely perceived as corrupt, self-interested, and ineffective.” Thus, it is in this context that Rubio proposes a provoking solution, simply that the Mexican president “make the Rule of Law his own and decide not to violate its elementary principles for the sake of expediency.”

In other words, Rubio asks the Mexican president to institutionalize political power by, for once, adhering to law. Yet, today we find our country so far from the thriving market-based economy we set out to build, from the representative and open democracy that we should have become, from the egalitarian and fair system that was promised by the Revolution, that this utopia could seem somewhat marginal. Could a president’s newfound faith in laws really convert all Ministers, Governors, Judges, Congress members, police officers and low-level bureaucrats —many already accused of wrongdoing— into law-abiding public servants? Could a better political culture trickle-down from the federal executive power, to the rest of the country, if the president suddenly starts behaving properly? Or, would the political elite simply dismiss the Commander in Chief as being weak, crazy or naive?

It is no secret that the presidency has lost a lot of de facto power in the last decades. As Denise Dresser, a political analyst with enviable prose, describes it: "Mexico has transitioned from PRI domination to a divided democracy; from omnipotent presidentialism to an incompetent presidency; from the country without freedom, to the country that does not know how to handle it." I previously wrote about this in The End of Nostalgia, back in 2013, stating how political power in Mexico had moved out of Los Pinos to San Lazaro. So, while I do not fully see how the main proposal of Rubio’s utopia would play out, —after all, Mexico is not the size of Singapore— I am very fond of Rubio’s out-of-the-box thinking, and I agree with him on a couple of things. First, he rightly asserts: “Mexican society finds itself at an optimal moment for great leadership to steer the way to a great transformation.” Second, he points out the biggest dilemma that our country faces today: "to reestablish our old political control mechanisms, or build a new political structure."

Inspired by Luis Rubio, I want to propose my own Mexican Utopia, with an idea that lies at the center of my new book, Merit: building the country of us. There, I state that our country would benefit from replacing the culture of privilege —the prevailing culture in our political, economic and social elites— with a culture of merit. To achieve this, Mexico must turn again to the task of building a meritocracy, starting with our public sector. To an American reader, this statement will seem odd as meritocratic principles are deeply engrained there. Thomas Jefferson himself believed that there was “a natural Aristocracy among men; the grounds of which are Virtue and Talents." Yet, south of the border, meritocracy never arrived. Author Jorge Castañeda wrote in his recent autobiography “the idea of ​​merit as a source of power, money, privilege and control, obtained solely from office, is anti-Mexican." In his words, with the exception of the Finance Ministry, the Central Bank and our diplomatic service, in Mexico there is no meritocracy to be found.

But in order to ensure the success of our country  —or any country that intends to combine capitalism with democracy— meritocracy is a must.  Around the world, many countries and leaders have recognized the benefits of using merit as the main vehicle to allow its citizens to reach the top. Mexico’s key institutions including universities, trade unions, business, and the government would all benefit from competition for human talent, an expansion in political leadership, and, ultimately, increased economic productivity.  A new merit-based society in Mexico could move the country away from its most spiteful deficiencies of the past, and towards greater gender, class and ethnic equality.

As Luis Rubio and many others believe, Mexico rests at a historic junction in 2015. Today we can no longer accept that we are in a kind of transition. Today we cannot accept the idea that following our current elite will lead to progress. Fortunately, Mexico seems finally more open to new options, new ideas, new and better forms of leadership. Today we have the opportunity to reinvent the relationship between government and its citizens, between society and its chosen political elite. Today we begin —as the Ministry of Finance announced for the 2016 fiscal budget— with a "zero base" society. Building a public meritocracy could be one of the pillars of Mexico’s political transformation.

So, how do I propose that Mexico build a meritocracy? To begin, Mexican society needs to recognize that it has more tools than ever in history to change the incentives, rules, and personal qualities they could demand from their politicians and leaders. Thanks to the slow-but-steady democratic reform process of the last two decades, citizens have acquired new ways of participating in democracy. To name a couple: laws can now be initiated by civil society and referendums and direct democracy mechanisms have also just been introduced last year. Most importantly, however, 2015 marks the first time since 1930 that independent candidates —that is, citizens without any formal political party affiliation— may be elected to public office. This can shift the focus of the electorate from party ideology to the personal qualities and stories of the candidates themeselves.

Thus, in this coming election Mexicans have two ways of challenging the entire political elite. The first, which has been proposed by many —including Denise Dresser— during the last few years, is to nullify votes. By doing so, the idea is that Mexicans would send the message that all political parties are seen as accomplices, as illegitimate, and as being useless. The second option, one which I would support instead, is to focus on the personal attributes of the candidates, including academic and professional qualifications, experience, honesty, social awareness, and moral rigor. In a month’s time Mexicans can challenge the political establishment by voting for personal merit, instead of political clout. Sadly, out of the almost 2,200 public offices in the national and state legislatures, or as governors and mayors, only 50 of them could be filled by independent candidates. However, this still represents the first opportunity to put this new meritocratic utopia into action.

Meritocracy seems to me to be the finest, fairest, most achievable  —and perhaps the only way within the rules of global capitalism— to create a more productive and cultivated society. Building a merit-based society for Mexico is a possible and desirable task for our emerging democratic and market-friendly economy. The alternative is to continue to sink in the morass of neo-colonialism and corruption, under the yoke of the culture of privilege. Making “the recognition of merit” part of a new national purpose, Mexican society could begin to move from dependency to independence, from impotence to personal agency, from patronage and clientelism, to the elimination of all forms of undue privilege.

The 2015 election could be the turning point that Mexico needs. If political power in Mexico continues to be hogged by a select group, and based on large-scale complicity and cronyism; if private profits continue to depend more on government handouts, illegal and dishonest activities, and market concentration; if social mobility and success is based on deals, relationships and inheritance, instead of abilities, talents and effort, then the chances of a more equitable development for the Mexican society will vanish, as they have so many times in the past. 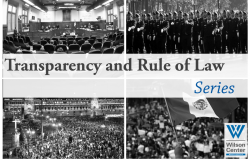 Article
Democracy
Transparency and the Rule of Law Series
May 18, 2015