Skip to main content
Support
Show
Live Now
The Black Republic: African Americans and the Fate of Haiti
Explore More
Close
Blog post
Economics and Globalization
Marijuana: Made in Uruguay
By Mayra Iglesias on February 19, 2021
Share on FacebookShare on TwitterShare via Email
SharePrint
Part of the The Expert Take
Article

As the United States debates “emergencies” at its southern border and negotiates a trade deal with China, U.S. leaders must confront the lethal trade in fentanyl from other North American countries and especially from China, a major player in the opioid epidemic that is killing tens of thousands of Americans each year.

The U.S. needs to double down on efforts to assure more effective cooperation with China, Mexico and Canada, bilaterally and through a new four-way framework to halt this deadly commerce.

China is a principle source of the illicit synthetic fentanyl, its analogs, and precursor chemicals that are arriving in North America.  Significant quantities flow from China through Mexico and Canada, as well as arrive directly in the U.S. from China.  Most fentanyl (as well as other synthetic opioids) is smuggled through legal points of entry and via international mail carriers.

China did not create the insatiable U.S. appetite for addictive opioids, but China continues to fuel it. The United States has frequently protested to the Chinese government about these illegal drug flows.  In November 2018, however, the U.S.-China Economic and Security Review Commission reported that there has been no substantive curtailment of fentanyl flows from China to the U.S. due to weak regulations governing pharmaceutical and chemical sectors in China. In China, webs of corruption and criminality have complicated law enforcement agencies’ ability to disrupt manufacturing, distribution, and trafficking of illicit drugs, including fentanyl and chemical precursors into North America.[1]  Numerous reports cite the booming imports of synthetic opioids from China into Mexico, as well as the increased smuggling from Mexico into the United States.[2]

In late 2018 President Trump raised these issues with Chinese President Xi Jinping and subsequently shared his assessment that President Xi is committed to helping stem the flows of illicit fentanyl and dangerous chemical precursors by cracking down on clandestine labs and shippers, and regulating these pharmaceuticals as “controlled substances”.[3] 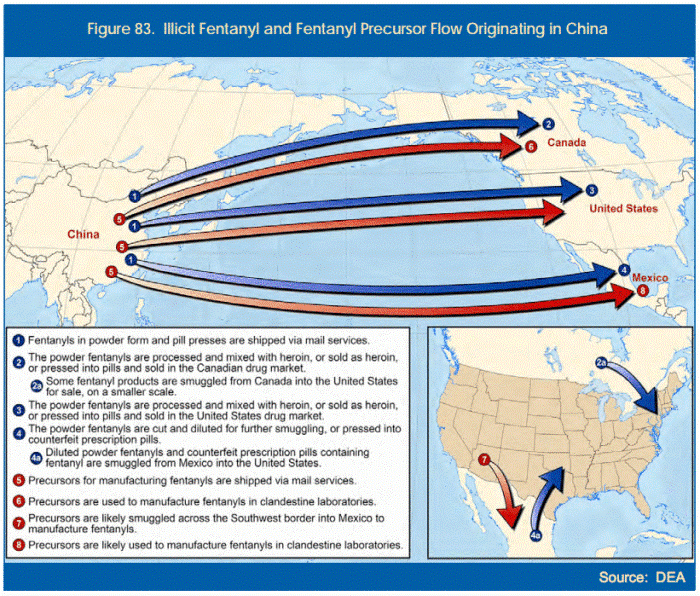 China’s high-level commitment to crack down on illegal drug commerce amid ongoing trade talks is important and must be codified as part of a U.S.-China understanding.  The real measure of President Xi’s political will is if enforcement reduces the volume of illicit fentanyl and other synthetic drugs flowing to the United States, Mexico, and Canada.[4]

Mexico and the U.S. agreed on a plan to go after the entire chain of drug smuggling to the U.S. in 2017, which includes fentanyl, heroin and other illegal drugs.[5]  U.S. rhetoric about the U.S.-Mexico border and politics have hampered progress, however.[6]  Canada and the United States work well bilaterally, and the three North American countries hold drug policy talks annually to address the threat to all three societies.[7]

Effective U.S.-Mexico law enforcement cooperation that disrupts trafficking of hard drugs is essential to address real American and Mexican “crises” that involve the shared border: the drugs that feed U.S. demand and the illegal profits that arm and fuel violence and corruption in Mexico.[8]

Fentanyl is 50 to 100 times more potent than morphine. It is used as an anesthetic in surgeries and prescribed to reduce chronic pain for an array of illnesses, such as cancer.[9] The vast over-prescribing of opioids and other serious abuses in the U.S. medical system have helped fuel the addiction crisis, but increasingly the fentanyl-related harm and death in the U.S. come from fentanyl produced and distributed by criminals.  It is sold on streets across the U.S., often mixed with heroin and/or cocaine to increase the potency and euphoric effects of the drugs and to increase the criminals’ profits.[10] 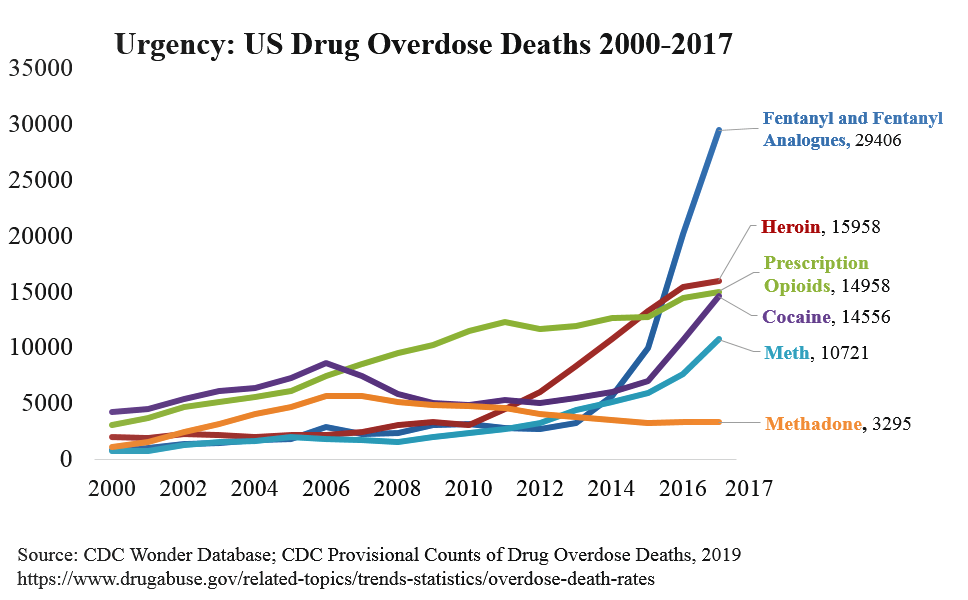 According to the Centers for Disease Control and Prevention (CDC), overdose deaths involving non-methadone synthetic opioids including fentanyl increased almost 47% from 2016 to 2017.[11]  CDC estimated that about 29,400 people have died from overdoses involving fentanyl and fentanyl analogs, and opioids account for more than two-thirds of the deaths from drug overdoses in the U.S. in 2017.[12]

Mexico has been grappling for years with challenges related to drug trafficking to the U.S. Criminal networks earn tens of billions of dollars a year supplying U.S. users.[13]  In recent years, those criminal networks expanded heroin production in Mexico and now focus on supplying synthetic opioids, as well as methamphetamines, to feed the U.S. market.

Of increasing concern is the use of the mail and express couriers to ship fentanyl or fentanyl analogs along with pill presses and binding agents to criminal groups in Canada, Mexico, and the United States.  Containers are mislabeled and packets hidden to avoid detection at legal ports of entry.[14]  Selling fentanyl on-line via the open internet in China and the “dark” web in the U.S. has also become prevalent.[15]

Fentanyl and its hybrids are very profitable for criminals.  For about $32,000, a kilogram of fentanyl can be converted into some 1 million pills that have a street value of several million U.S. dollars.[16]  It is highly addictive.

A wall along the U.S. Southwest border will not be a barrier to the smuggling of these deadly opioids, however.  Evidence-based reports and public prosecutions, including the recent Joaquin “El Chapo” Guzman trial, show that most drugs are smuggled into the U.S. through legal ports of entry or tunnels.  In late January, U.S. Customs and Border Protection agents in Arizona made the largest-ever seizure of fentanyl: it could have provided 100 million doses.[18]

Increasing the deployment of state-of-the-art fixed and hand-held sensors on the U.S. and Mexican sides of the border ports of entry would have a big impact in detecting drugs headed northward either in vehicles or with pedestrians, as well as detecting illicit guns and bulk cash heading to Mexico.  The U.S. should aggressively fund this sensor technology through the Department of Homeland Security and the Department of State’s Merida program in Mexico, which would greatly strengthen and protect both sides of the border.[19]

Mexico's new President, Andrés Manuel López Obrador, and his ministers need to give priority to working with the U.S. to disrupt these vicious illicit smuggling networks, even as they seek to reduce the historic levels of criminal homicides harming Mexican society. [20]  The drug trade continues to fuel great insecurity in Mexico.  Disrupting drug flows and seizing the profits are key parts of the solution to Mexico’s criminal violence.

Regarding China, the Trump Administration must test the political will of Chinese leaders to stop the flows of fentanyl, fentanyl analogs, and precursors to North America as part of a broader trade deal.  There should be strong commitments with metrics to evaluate enforcement results.

Such cooperation could include the establishment of a Quadrilateral Commission against Illicit Opioids and International Organized Crime (Q-IOC2) between the U.S., China, Mexico and Canada.  The Quadrilateral Commission would regularly review results of enhanced law enforcement and justice cooperation and of targeting and detecting dangerous synthetic drugs at ports of entry in North America and at other vulnerable entry points along the northern and southern U.S. borders.  This diplomatic and security mechanism could identify areas for improvement as well as successes. Such a four-party confidence-building process would reinforce the homeland security of each country.

Part of a successful effort to reduce smuggling must also involve more effective use of sanctions and asset seizures by the U.S. and the other three countries. Breaking the corrupting influence of these massive illicit enterprises by seizing property and financial assets of traffickers and their associates must be high priority for cooperation.[21]  A successful Quadrilateral process can help spur innovative dissuasive sanctions and enforcement approaches to mobilize collective action against the booming trafficking networks behind drug “emergencies” and related crime in North America.

Progress will require a balanced approach including stronger demand reduction programs: better prevention, treatment, recovery and rehabilitative services for drug users.  However, mobilizing strong U.S. political will, and that of our North American neighbors and China is essential to disrupt nefarious trafficking networks and put those involved behind bars.

Earl Anthony Wayne is a Public Policy Fellow at the Woodrow Wilson Center and a former U.S. Ambassador to Mexico and Assistant Secretary of State, Bureau for Economic and Business Affairs, among other positions.

An earlier version of this article was published on The National Interest.

[3] The White House, “Statement from the Press Secretary Regarding the President’s Working Dinner with China”, December 1, 2018. https://www.whitehouse.gov/briefings-statements/statement-press-secretary-regarding-presidents-working-dinner-china/.  Also USTR LIghthizer testifying before the House Ways and Means Committee in February 2019, https://www.c-span.org/video/?458285-1/us-china-trade-relations

[8] Earl Anthony Wayne, “3 Real Emergencies at our southern border and how to fix them”, The Hill, February 5, 2019. https://thehill.com/opinion/immigration/428527-3-real-emergencies-at-our-southern-border-and-how-to-fix-them

[20] Testimony of Ambassador Earl Anthony Wayne Before the Senate Committee on the Judiciary, Subcommittee on Border and Immigration, “Narcos: Transnational Cartels and Border Security”, December 12, 2018. https://www.judiciary.senate.gov/imo/media/doc/12-12-18%20Wayne%20Testimony.pdf