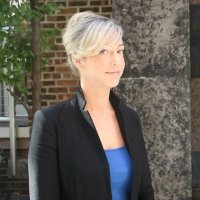 Lauren Erin Brown is a Title VIII Short-Term Scholar with the Kennan Institute. We recently asked her to tell us more about her project titled "Cold War, Culture Wars, War on Terror: The Art of Public Diplomacy in a Post-Cold War World” and the role of cultural agencies in American public diplomacy.

My expertise is cultural policy, international and domestic. My first stay at the Kennan Institute was actually a decade ago! I had just returned from a Fulbright in Moscow doing follow-up research from my doctorate, focused as it was on the connection between Cold War cultural diplomacy (specifically U.S. and Soviet ballet exchanges) and the emergence of federal arts funding in the form of the Endowments (NEA/NEH.) At that juncture, Kennan support allowed me time at the National Archives in College Park, doing further work with State Department records. Now, a decade later, my work has shifted chronologically to think about what role the ending of the Cold War played on American cultural policy.

My current book project, “Cold War, Culture Wars, War on Terror: The Art of Public Diplomacy in a Post-Cold War World, 1990-2010” is an expansion of a recent article published in Cold War History.  I’m asking three essential questions.  First, what role did cultural agencies like the NEA/NEH, the Kennedy Center, and the Smithsonian play in American public diplomacy?  Second, how did the Cold War’s end impact their operations?  Third, was the resuscitation of agencies gutted in the mid-90s and subsequent programming related to the War on Terror?  Preliminary research suggests the Bush-era launched a public diplomacy operation—a marketing campaign straight from the Cold War playbook—to rebrand the NEA, enlist other agencies in reaffirming American cultural values, and support the war.

One favorite program example I’m researching is the NEA’s Big Read.  In 2007, a NEA staffer recounted a library visit in Ivanovo, Russia.  Alongside NEA Chairman Dana Gioia and International Partnerships Director Pennie Owed, he listened to local teens analyze To Kill a Mockingbird, Harper Lee’s novel of race and justice in Great Depression Alabama. One wondered, “if the second-class citizenship that the black townspeople endured in the book was so different from what the Chechens [were] going through nowadays,” while another spoke of prejudice as a Tatar’s son. A third discussed the “universality of a good book,” since “‘writers have no nationality.’” All were participants in the NEA’s Big Read, which debuted the year prior in America.  Finding fewer than half of all Americans read novels, the NEA aimed to “restore reading to the center of American public culture.”  Pilot cities chose an American classic for a city-wide book club. The program went international through the State Department’s Global Cultural Initiative, a rebirth of Cold War programming previously undertaken by organizations like the United States Information Agency (USIA). For its part, the NEA partnered with Russia, Egypt, and Mexico to deliver the Big Read abroad. It was Congressional gold for an agency previously under fire for sponsoring works felt morally suspect, obscene, or pornographic, such as Andres Serrano’s Piss Christ (1987).

There's the romantic answer and the intellectual answer to that question. The intellectual answer is that I've had the great fortune, over my career, to be mentored by some outstanding consumer historians--Daniel Horowitz at Smith, Charlie McGovern, with whom I overlapped at the Smithsonian, and Lizabeth Cohen at Harvard. And what is cultural diplomacy if not marketing America? Indeed, one of my favorite quotes dates to 2002, where Washington Post had then Representative Henry Hyde (R-IL), the House International Relations Committee Chairman, on record asking, “How is it that the country that invented Hollywood and Madison Avenue has allowed such a destructive and parodied image of itself to become the intellectual coin of the realm overseas?”  (Wilson readers familiar with the field will be thinking, well, for starters---you gutted the USIA.)  I remain endlessly interested in how cultural policy reflects and creates “America,” especially abroad, particularly when the version we sell to others conflicts with an “America” actively contested at home.

The romantic answer?  A rose from a Russian ballet dancer.  A child of the 80s, I had the good fortune to present the after-show flowers on stage to a touring group of Soviet dancers who performed Sleeping Beauty’s “Bluebird” pas de deux.  I handed the dancer her bouquet and as they do, she pulled out a rose to hand back to me—not yet ten and totally besotted with the Russian standing in front of me.  I knew this was the enemy (being the last generation to grow up with atomic bomb duck and cover drills) and she was so beautiful.  That I’d find myself decades later sitting at the Bolshoi and the Maryiinsky, studying the exchanges that brought that dancer to stand in front of younger me, seems fitting.

The Russian government shuttered the U.S. Embassy’s American Center in Moscow in 2015, housed for two decades at a local library.  I lectured there while a Fulbrighter—an unassuming spot for the people-to-people interactions Cold War programs promoted.  The American Center reopened, but within the Embassy’s campus, thus necessitating Russian visitors present passports and eliminating the casual visits people-to-people exchange intends.  These are important programs which are not always maintaining support.  Meanwhile, we are at a precarious moment, post-Trump administration and mid-COVID economic uncertainty.  Calls to eliminate the NEA/NEH increased over the previous administration.  Now stimulus endeavors attempt to stave off economic crisis.  Whether these agencies—domestic and international culture exchange workers that they are—survive (hopefully thrive) or follow the USIA’s path depends on our understanding of the work they do in the world.  America lives with institutions and policy approaches, cultural diplomacy especially, that are by-products of the Cold War.  It's time to understand historically how the Cold War's end impacted their well-being and missions as we’ve moved into a post-Cold War world, especially one with new Russian antagonism and instabilities.

At the moment?  That COVID-19 has closed the archives.  While opportunities are borne of chaos, the reality is thorough historical work requires archival access. I think we all want this to be a watershed moment, wherein archival digitalization leaps to new levels but that only happens with great resource infusion--i.e. cash. Those of us who rely on the National Archives in College Park, for instance, know that the massive materials collected relative to the staffing and resources have long been out of proportion, leading to painfully slow processing, declassification, and release of materials--and that's not even thinking about digitalization. As someone who studies the impact of funding and philanthropy, whether this moment yields seismic change or nothing more than lost time is in the hands of Congress and private philanthropies.

In normal times, however, I'd argue what bedevils both the practice and study of cultural diplomacy and/or broader cultural policy is impact measurement.  The cheap and easy criticism of any such work simply muses, “but what exactly did the government gain from these efforts,” as if necessitating a smoking gun in the form of a letter from Gorbachev to Reagan proclaiming “I have seen Alvin Ailey’s dances and I must accept defeat.  Wall comes down Tuesday.”  Just as American educators have been drawn into elaborate assessment schemes in efforts to quantify learning’s bottom lines, so too the field of cultural policy and public diplomacy—victims of American corporatization where marketing must be understood to deliver clear, documentable, and immediate sales growth figures.  Attempting to understand public diplomacy this way is often missing the forest for the trees.  Everything does not boil down to immediate American ROI; it can also be about understanding why the government makes the support choices it does and what that says about our nation or our international relations.

Simply put, for more people to see the value a coherent and thoughtful cultural policy offers our nation, both as an avenue for self-understanding domestically as well as a path for positive impression management and connections abroad.  And for these efforts to be funded appropriately, dare I even suggest, richly.