Americans and Canadians alike depend on oil to fuel their economies and lifestyles. Neither country has produced sufficient domestic supplies to free itself from reliance on imports and no alternative energy source has yet to emerge that comes close to meeting North American needs. One available source that could increase domestic supplies can be found off both the east and west coasts of Canada and the U.S. But in the wake of the 2010 Deepwater Horizon explosion in the Gulf of Mexico, there is much opposition to drilling for oil in the ocean’s depths. Calculating risks and calibrating regulations are complex undertakings, and there is plenty of disagreement over how to proceed. But one thing is certain, demand is not going away anytime soon. Another certainty is that from addressing environmental risks to defining effective regulations and practices, there is much that North America’s neighbors can learn from each other. With that in mind we spoke with two experts, one from each country, to gain their insights into the many issues and considerations related to drilling for oil off the coasts of the shared continent. Alexander (Sandy) MacDonald is the managing partner of the St. John's, Newfoundland and Labrador office of Cox & Palmer, an Atlantic Canadian law firm. He specializes in energy matters, particularly in off-shore oil and gas and in electrical generation and transmission. 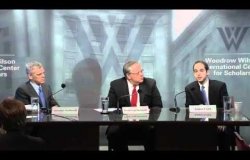