Iran's nuclear program continues to move forward. Israel and the United States have declared a nuclear Iran unacceptable. Negotiations have stalled while sanctions appear to be taking a toll on the Islamic Republic's economy. How will the standoff be resolved? Is a diplomatic solution possible or is a military confrontation inevitable? To gain insight into the possibility for diplomacy to prevail, we spoke with two veteran Iran experts with decades of direct experience in the diplomatic arena. First up is the Swiss Ambassador to the Islamic Republic. Because of Switzerland's role as "protective power" of the U.S. in Iran, Livia Leu Agosti has served as the diplomatic liaison between the countries since 2009.

Ambassador Livia Leu Agosti has served as the Swiss Ambassador to the Islamic Republic of Iran since 2009. Prior to her appointment as Ambassador, Ms. Leu Agosti was posted in Paris, New York (at the Swiss Mission to the UN), and Cairo. Most recently, she served as head of the Swiss Foreign Ministry's Africa and Middle East Department. 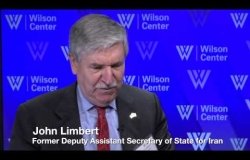 Video
Security and Defense
Negotiating With Iran Part 2: A Matter of Trust