Negotiating With Iran Part 2: A Matter of Trust

Iran's nuclear program continues to move forward. Israel and the United States have declared a nuclear Iran unacceptable. Negotiations have stalled while sanctions appear to be taking a toll on the Islamic Republic's economy. How will the standoff be resolved? Is a diplomatic solution possible or is a military confrontation inevitable? To gain insight into the possibility for diplomacy to prevail, we spoke with two veteran Iran experts with decades of direct experience in the diplomatic arena. John Limbert, one of the 52 Americans held hostage for 444 days from November 4, 1979, to January 20, 1981, shares his unique perspective on U.S.-Iran relations.

Ambassador John W. Limbert is the former Deputy Assistant Secretary of State for Iran in the State Department's Bureau of Near Eastern Affairs. He is a veteran U.S. diplomat and a former official at the U.S. Embassy in Tehran, where he was held captive during the Iran hostage crisis. 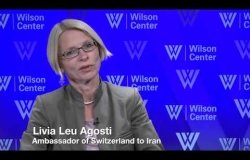