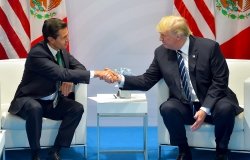 Event
NAFTA/USMCA
The U.S.-Mexico Trade Deal: Is This the End of NAFTA?
On August 28, 2018 at 1:30 – 2:15
Share on FacebookShare on TwitterShare via Email
SharePrint
Part of the NAFTA and USMCA Resource Page
Article

See brief analysis from our experts on the recently announced U.S.-Mexico Trade Agreement.

The United States and Mexico made an important step forward in the renegotiation of NAFTA, but there is still a long road ahead to conclude the agreement and have it ratified by Congress. The goal now must be for both parties, but especially the United States, to resolve its pending issues with Canada so that a final agreement can be reached. Creating a bilateral U.S.-Mexico Trade Agreement, as President Trump proposed, would amount to a major loss for all three countries. NAFTA has made North America more competitive by allowing the development of highly efficient regional production systems in which the three countries work together to manufacture goods. Creating two separate bilateral agreements would put the North American production platform at risk, and as a result, make all three countries less competitive. A modernized trilateral agreement, however, has the potential to promote investment across North America and strengthen regional competitiveness.

Quotes from Conference Call - U.S.-Mexico Trade Deal: Is this the End of NAFTA?

"I think it’s [the U.S.-Mexico understanding] also a positive, perhaps even more importantly in the broader context, in that it helps clear away some of the underbrush in the broader negotiations that had been really progressing quite slowly, and even if Canada wasn’t sitting at the table, there are now a series of frameworks, proposals for them to consider that weren’t there before. The challenge will be for them to come in and see what they think is acceptable and what they would like to change."

"I think it’s really important to remember that although Mexico is our number three trading partner and it is our number two export market, number one on both of those lists is Canada, so this agreement will be much more powerful for the future of North America and for the potential of the United States if it is a trilateral agreement, rather than a bilateral agreement."

Quotes from Conference Call - U.S.-Mexico Trade Deal: Is this the end of NAFTA?

"It’s also in large part a personal connection here. The story with Donald Trump and with the negotiations of NAFTA of course really begins during the election campaign in the United States in 2016 when Donald Trump paid that infamous visit to Mexico and Peña Nieto was, of course, slammed by the Mexican media and by other political parties for engineering this. It was, of course, at the time, the idea of Luis Videgaray, who then was finance minister and is now foreign minister. And both Peña Nieto and Videgaray really want to complete the cycle. They want to actually end this story on a bright note. To be able to say, in the annals of history, that they didn’t make a huge mistake in that initial reaching out to Trump. And they were actually able to handle the bilateral relationship in an effective way. So I think you have that kind of wish on their part to finish the story the way they began."

"We know that that [Videgaray’s message confirming a bilateral deal if a trilateral deal does not occur] was not well received in Canada. If you read the Canadian press today than you can see how many Canadians feel as though Mexico has turned its back on Canada. We don’t know what the Canadian foreign minister, Chrystia Freeland, thinks about it. She’s back in D.C. today and is engaging in the negotiations with the United States. But given the fact that Canada backed up Mexico early on in these NAFTA negotiations, given the fact that there were reiterated declarations of solidarity between Canada and Mexico, I think yesterday’s statements on the part of Secretary Videgaray would really not have gone down particularly well in Ottawa and across the country."