The Case for Services Trade 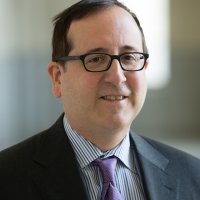 While there has been a great deal of focus and public debate regarding the impact of trade policies on the manufacturing base of the United States, there has been a much more limited discussion of trade policies and the services sector. But the United States depends greatly on the services sector for economic growth and jobs, and is likely to continue doing so in the immediate future.

While there has been a great deal of focus and public debate regarding the impact of trade policies on the manufacturing base of the United States, there has been a much more limited discussion of trade policies and the services sector.   But the United States depends greatly on the services sector for economic growth and jobs, and is likely to continue doing so in the immediate future.  Whether it’s financial services, digital services, hospitality services, education services, or a host of other industries, a strong and vibrant services sector will undoubtedly play an essential role in the future competitiveness of the entire U.S. economy.   When the issue of “trade” in services is referenced, it is not just trade in the conventional sense where a product is exported from one country to another but includes a range of international transactions including cross-border trade in air or transport, consumption by foreigners of tourism services, foreign direct investment (FDI) in banking, insurance, communications and distribution, and the temporary migration of many workers in services industries.  Advances in digital trade have expanded the scope of services that can be exported cross-border and many countries currently allow foreign investment in competitive markets for key infrastructure services such as energy, communications and transport.[1]  Given the size and scope of services trade to entire economies the health and growth of this sector is crucial not only for services industries but for entire economies.

The services sector is wide and diverse and covers a wide array of sectors including retail, financial services, digital services, real estate, hospitality, education, health, social work, computer services, recreation, media, communications, and electricity, gas and water supply.  Services industries account for a large majority of U.S. output and employment.  In 2015, U.S. services industries accounted for 78 percent (or $11.0 trillion) of U.S. private sector GDP and 82 percent of U.S. private sector full time employees - compared to 22 percent and 18 percent respectively for the goods producing sector.[2]   Services sectors such as education, health care, and social services are the United States’ top employers with over 20 percent of jobs in 49 states.  Financial services are the grease that facilitates global commerce.  The explosive growth of cloud technology is creating additional demand for information technology infrastructure in all sectors.    Digital services are essential to how Americans and much of the world live.  It is unimaginable to live in a world without smart phones, social media, online banking, or even online shopping.   See below the total number of jobs in the United States.[3]

In addition to overall services employment, workers in “tradable” services sectors (meaning sectors whose output can be traded internationally) are qualitatively different than workers in non-tradable services or manufacturing.  Many of these workers have a higher level of education and significantly higher earnings.   As a result, these are positions that the United States will likely retain and even expand as new opportunities for services exports grow.  [5]Opening new services markets in tradable services should be a priority for U.S. trade policy, given than the United States has a major comparable advantage in these services segments.

The United States is also the world’s largest services market and remained the largest cross-border exporter and importer of services in 2015.  The United States accounted for $687 billion or 14 percent of global cross-border commercial services exports in 2014.  Other top single country exporters included the UK and France which accounted for $337 billion (7 percent) and $267 billion (5 percent) respectively.   Although most of the top services exporters are developed countries, China was the fifth largest services exporter in 2014 and India was 8th. 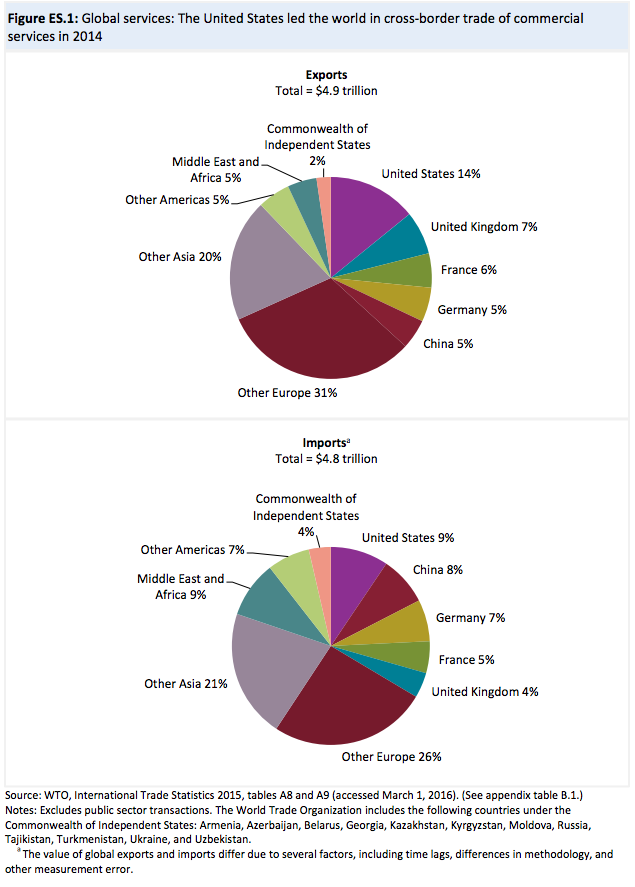 Services sector productivity is also a critical factor in determining competitiveness in today’s integrated global economy – including for U.S. manufacturers.  Services companies are often the customers of U.S. manufacturers and the prevalence of global supply and value chains have made U.S. manufacturers and services providers more interdependent.   For example declining coordination costs have led to production increasingly being divided into different stages and spread out geographically and organizationally.  These trends demand greater use of communication and transportation services in manufacturing.[7]

Utilizing services is now a strategy for manufacturers to increase the value of their products to consumers, strengthen customer relationships, and differentiate products from competitors.  The importance of services industries throughout the global supply chain, the prevalence of industries connected to the knowledge economy, and the key role that the supply of services play in the ability of small and medium sized companies to grow and expand are superimposed against a world where U.S. and other companies face increasing barriers to exports of services.

Manufacturing and services successes (and declines) are increasingly linked and U.S. economic and trade policymakers should approach U.S. competitiveness challenges through an inclusive framework that does not seek to isolate manufacturing from services – but through a policy agenda that prioritizes addressing trade barriers to both segments.

This is important because without question services providers face a myriad of trade barriers preventing the expansion of services trade and along with it the economic growth and development that would result from greater services trade.  U.S. and other international services providers are facing new trade barriers on such disparate issues as cross border data flows, unfair competition against state-owned enterprises, and local content requirements.  Most of these barriers are being erected by large economies seeking to restrain trade and expand their domestic industries at the expense of fair competition and what is best for its own citizens.   Many of these services and investment barriers also have direct links to manufacturing.  For example:

·         China’s insurance regulator has finalized new rules mandating that insurance companies operating in China give first priority to purchasing “secure and controllable” information and communications technology products.  These regulations would impose severe restrictions on a wide range of ICT products, prohibit insurance institutions in China from choosing ICT hardware and software from vendors anywhere in the world, and raise broader concerns for industries not even impacted by these measures.

·         Indonesia has issued regulations outlining mandatory local content requirements (LCRs) for all 4G LTE-enabled wireless telecommunications devices and base stations.  These measures are part of Indonesia’s broader plans to move up the value chain of manufactured products by requiring companies investing in Indonesia to develop domestic manufacturing.   While the regulations require LCRs for manufacturing, these rules are essentially an investment measure for it is not possible to meet the LCR without investment in Indonesia – nor it is possible to invest in Indonesia as a distributor of these products without meeting the LCR.

Lastly, one of the most critical services related trade issue is the exponential growth of digital trade over the past decade.  According to McKinsey and USTR, cross-border data flows grew by 45 times between 2005 and 2014, and will grow another nine-fold in the subsequent five years.[8]  These data flows generated $2.8 trillion in economic value in 2014—a greater impact on world GDP than global trade in goods. Such growth reflects not just the dynamism of the technology industry, but also the digitization of the economy as a whole.  Digital trade is crucial for nearly all firms, from large multinationals to small businesses that rely on online platforms to connect and trade with customers around the world.

Many governments have responded to these changes by seeking to control digital trade including the imposition of data localization requirements compelling businesses and other entities to store data within the countries they are operating.   These barriers have a profound impact across economic segments.  In late 2016 the Information Technology and Innovation Foundation released a new report singling out the importance of international agreements securing the free flow of cross border data.   The report stated the best way for the U.S. to regain global industrial market share and jobs is through the development of “smart” manufacturing, but a necessary condition of the growth and development of smart manufacturing would be future trade international agreements preventing partner nations from imposing barriers to cross-border data flows.

·         U.S. FDI in Canada totaled $386 billion in 2014 led by non-bank holding companies, manufacturing and finance.  Canada’s FDI in the United States in 2014 was $261 billion and includes direct investment by manufacturers, finance, insurance, and depository institutions.

Next steps for US Services trade agenda

Addressing the myriad of services trade issues will need to be a central focus of next Administration.  Below are several recommendations which the Trump Administration could pursue which would directly impact U.S. competitiveness and American jobs.

·         Negotiate a Data Services Agreement.   A new multilateral data services agreement would reinforce the importance of technological and procedural methods to store and transfer data rather than the geographic location of where data is actually stored.  The agreement could serve as a “Geneva Convention” regarding access to data around the world.

·         Collecting and recording Services Data.  Services data is traditionally more difficult to calculate than goods.   There is a lack of empirical research on the size, scope, and potential impact of services trade and some official data lacks the detail of manufacturing data.   The incoming Administration should expand the Bureau of Economic Analysis’s Trade in Services Initiative in allow BEA to publish more detailed trade in services data by geography and type of service.  This effort would directly provide stakeholders with new insights on expanding trade in high-value service categories and support U.S. trade promotion and trade negotiations with foreign partners.

·         Launch an Urban Services Export Promotion Initiative (USEPI).  Brookings has concluded that the economic growth and vitality of cities is depending on the growth and development of the services (and especially the tradable services) sector.  Millennial preferences to live in cities is driving services sector opportunities for all parts of the urban core to benefit.[9]  The Federal Government’s Trade Promotion Coordination Committee (TPCC) could launch the USEPI to engage all federal agencies to target opportunities for tradable services businesses to export through policy, promotion and analysis vehicles.

·         Resume Trade and Investment in Services Agreement (TISA) negotiations in 2017.   TISA was launched in 2013 and is a multilateral trade agreement focused exclusively on services.  It includes 23 countries and nearly 70% of the world’s $55 trillion services market.  Moving forward and concluding the TISA negotiations in 2017 would immediately open new markets for American services exporters and create new, high-paying, high-skills jobs within the United States.

Paul Thanos is the Global Trade and Investment Fellow at the Wilson Center.

[7] Kommerskollegium National Board of Trade Sweden. “The Servification of EU Manufacturing.” Oct 2016.