The Stakes at Mar-a-Lago

Xi is ready for the summit. Trump can’t possibly be. There are no Asia experts in his inner circle, he has not completed a review of China policy,and he hasn’t made appointments to the departments of State and Defense that are vital to effective management of the relationship. Most importantly—and like Barack Obama before him—he has not conducted an audit of America’s ability to uphold its commitments in Asia in light of China’s economic and military rise and the United States’ strategic distractions, costly domestic agenda, and looming structural budget crisis. Without that audit, bluffing Xi is out of the question. If Washington won’t do its math, Beijing will.

At the summit in Mar-a-Lago, U.S. President Donald Trump hopes to alter deeply-rooted Chinese policies despite having no China strategy. China’s Communist Party Secretary Xi Jinping hopes that by making deals on secondary matters important to Trump, he can indefinitely postpone America’s development of a strategic response to China’s rise. I offer a framework for an American China strategy at the end of this piece.

Xi is offering the United States a chance to make a mistake the Chinese call “throwing aside a watermelon to pick up sesame seeds” (丢了西瓜捡芝麻). The Mar-a-Lago sesame seeds may be Chinese factories that hire American workers, progress on a bilateral investment treaty, or agreement to tighten the screws on Chinese corporations that do business with Pyongyang: all welcome developments. But the watermelon, which Xi wants, is long-term global influence. America’s lack of an informed, energetic China strategy—a deficit which predates the Trump administration—indicates that Xi may draw closer to getting it in Mar-a-Lago.

Not only does Xi know what he wants from the United States—more on that below—his goals are founded in a comprehensive assessment of China’s capabilities, appreciation for the strength of the United States, and continual evaluation of how changing geostrategic factors present dangers and opportunities for China, including opportunities for global leadership. Through control of China’s media, moreover, and by skillfully invoking his countrymen’s desire for wealth and status, Xi seems to have united most of his people and the vast Chinese bureaucracy behind his goals.

Xi is ready for the summit. Trump can’t possibly be. There are no Asia experts in his inner circle, he has not completed a review of China policy, and he hasn’t made appointments to the departments of State and Defense that are vital to effective management of the relationship. Most importantly—and like Barack Obama before him—he has not conducted an audit of America’s ability to uphold its commitments in Asia in light of China’s economic and military rise and the United States’ strategic distractions, costly domestic agenda, and looming structural budget crisis. Without that audit, bluffing Xi is out of the question. If Washington won’t do its math, Beijing will.

Trump has declared that he is going to Florida to reduce America’s trade deficit with China and to convince Xi to pressure North Korea to give up its nuclear weapons. Xi’s policy priorities, too, are no secret. His goals are to maintain the Chinese Communist Party (C.C.P.)’s monopoly on power, to improve the welfare of the Chinese people through continued economic development, and to use trade, investment, the threat of military force, and leadership of global organizations to convince Asian nations to accept Chinese primacy.

To succeed in what he calls “the great revitalization of the Chinese nation,”what Xi chiefly needs from the United States is to be left alone. Beginning in the early 1980s, Xi’s predecessors sought American investment, technology, and managerial expertise, as well as U.S. support in organizations like the WTO, IMF, and World Bank. Xi’s China, however, believes it is self-sufficient and that it would be welcomed as the benign hegemon of Asia if only the U.S. would face reality and draw down. China is grateful for the pax Americana that allowed it to flourish over the last 40 years, and it does not wish the United States ill as long as it confines itself to a Western sphere of influence, but it’s time for the U.S. to exit China’s doorstep stage right. Xi will call if he needs anything.

Trump’s goal at the Florida summit is to wrest concessions from Xi in the immediate term; Xi is there to take Trump’s measure in light of China’s long-term goals.

Agreeing to increase pressure on Pyongyang, to buy more American goods, or to sign a communiqué is a small price for China to pay to stabilize relations with the U.S. Xi needs stability as he prepares for the C.C.P.’s 19th Congress, a meeting scheduled for late 2017 that could define his leadership for at least five more years. Making deals with Trump also serves to keep American minds focused on gradual progress instead of on the hard strategic questions which China’s rise poses:

If the U.S. trade deficit with China drops to zero after Mar-a-Lago, and if North Korean leader Kim Jung-un surrenders his nukes, these questions will be no less urgent. A real China strategy must address them.

Trump’s goal at the Florida summit is to wrest concessions from Xi in the immediate term; Xi is there to take Trump’s measure in light of China’s long-term goals. To achieve this, Xi doesn’t need Trump to declare his strategic disposition toward China, he only needs to know what Trump believes about the United States itself. If Trump thinks that America’s greatness depends on its alliances and its leadership of a liberal global order, Xi may have to recalibrate his push into the Western Pacific and Eurasia. But if Trump views America only as a mechanism for the aggrandizement of its citizens, Xi will conclude that China’s “period of strategic opportunity” may last longer than previously thought, and he will pursue his international agenda more aggressively.

The danger in Trump’s approach to China is not that he will push too hard at Mar-a-Lago, offend Xi, or make bad deals. It is that, despite his campaign rhetoric, China may be the thing Trump never quite gets around to. Immigration, health care, tax reform, a controversial budget, ISIS, and the Russia scandal are all higher up on his to-do list. The China challenge, while broadly understood, is historic, not immediate; it seems remote in time and space and is so damnably difficult that Americans and their government are unlikely give it the attention it requires unless there is a threat of war.

China is adept at keeping its provocations below that threshold, but its ambitions are undiminished. The C.C.P., its propaganda organs, multinational corporations, military, universities, and many ordinary Chinese believe that China is destined to recover its rightful status as the greatest nation on earth and that, to do so, it must weaken the United States’ influence in Asia.

In the face of such resolve, American inattention is acquiescence.

Analysts who charge policymakers with strategic laziness should offer solutions or put down their pens. Announcing the following principles of American China policy—assuming the U.S. has the will and resources to back them up—would make for a good start at Mar-a-Lago.

American China policy is grounded in three communiqués concluded between Washington and Beijing in 1972, 1979, and 1982; in the Taiwan Relations Act of 1979; and in the Six Assurances of 1982, in which President Ronald Reagan assured Taiwan that its welfare would not be sacrificed in the service of closer ties between the U.S. and China.Upon that foundation, and in light of changes in the United States, China, and the global environment over the last few decades, American China policy should have the following components:

This article was originally published at Chinafile under the title: "Xi Is Ready for the Summit. Trump Can’t Possibly Be. So What Should He Do?" 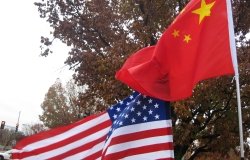 Article
U.S. Foreign Policy
What Will US-China Relations Look Like Under Trump?
By Robert Daly on January 25, 2017