Donald Trump has been elected U.S. President as disrupter in chief; somebody that can get things done and change the status quo.

The center of his program appears to be a tax reform to completely revamp the U.S. system.  “I understand the tax laws better than almost anyone. And that is why I am one that can truly fix them,” he said several times in debates and rallies.  The idea is to end up with a system that favors investment on infrastructure and capital goods.

His background as developer and his penchant for not paying taxes have led him to believe that the best way to promote growth and generate government revenue is taxing consumption rather than investment.  Furthermore, his infrastructure ambitions need significant private investment funds that might only come with a favorable regime.  The idea is to prompt firms and banks holding more than a trillion dollars in cash to put it to work.

Crucially, this vision is shared by Speaker of the House Paul Ryan whose blueprint proposal implies abandoning today’s corporate income tax with a cash flow tax base that allows for 100 percent deduction of capital expenditures and is complemented by a border adjustment tax (BAT) that exempts export receipts and prohibits deduction of imports.  This proposed scheme implies very significant changes in the United States and overseas and, if introduced formally to Congress, it will be highly controversial.

The United States is unique among most others in not having a Value Added Tax (VAT) charged at every step of the production, distribution and commercialization of goods and services, known as credit invoice method.  The reason is the differential sale tax regimes across the 50 states and the difficulty in reaching an agreement to have a national VAT.  Contrary to what is often said, not having a VAT does not put the United States at a disadvantage: its exports do not carry a latent tax to be reimbursed, while VAT paid at the border is fully recovered by U.S. exporters at first sale.

An alternative for the United States is to establish a VAT based on the subtraction method at the firm level, as opposed to the credit invoice.  The gross national product (GDP) is the total value added produced in a given economy, as opposed to total sales to avoid double counting.  This value added, GDP, can be consumed, invested, or exported.  In this manner, imports are not part of GDP calculations, not even on a net basis.  On the other hand, national accounting shows GDP is also the addition of the domestic payroll plus the compensation for the stock of capital invested.

This new tax regime would be highly disruptive if implemented.  It would impact U.S. sectors differently compared to today’s corporate income tax as the degree of imported goods and the intensity of exports are not uniform across them.  It might change relative prices in unforeseen ways impacting resource allocation.  It would also result in an appreciation of the dollar with respect to other currencies with the consequent losers (those short in dollars) and winners (those long).  It could also result in significant trade frictions with countries around the world.  If not done properly, it could be inconsistent with U.S. commitments in the World Trade Organization (WTO) and spark measures and countermeasures by several countries that could seriously harm the global economy.  Moreover, border adjustability is more problematic with the subtraction method if the tax rate is not uniform across sectors or stages as the export rebate would be difficult to determine.

Some have argued the proposal is WTO consistent as the tax regime would result in a dollar appreciation that preserves the status quo with respect to trading partners.  This is not necessarily true as exchange rates can deviate from equilibrium values for a long time, other countries might also adopt similar tax regimes and, even if it was true on average, the sectorial effect could show wide divergence.

Consistency with WTO hinges upon whether the BAT is based on value added.  For this, the crucial aspect is that the return on capital (including interest expense) and payroll are not subtracted from total sales.  WTO rules allow for a border adjustment (exempting export receipts and levying imports) only if the tax is value-added based.

There is body of jurisprudence showing that a border adjustment on a corporate income tax regime violates the WTO principle of national treatment as it prevents deduction of imported goods and services but it allows for domestic content, and it is also a prohibited subsidy as exports are excluded from total receipts.  However, there is also jurisprudence showing that a value-added based tax is consistent with WTO, but not for the subtraction method with border adjustment as of yet.  In this manner, the Republican proposed tax regime might be WTO consistent, but only if it is equivalent to a non-distorting value-added tax.  For political reasons, Republicans are reluctant to refer to the tax as VAT even if that helped them win WTO approval.

It is impossible to fully evaluate WTO consistency without the actual legislative language.  Nevertheless, one issue to look for is the deductibility of payroll in the calculation of the tax base.  If payroll is subtracted, the new regime would simply be a corporate income tax with immediate 100 percent depreciation and thus would not qualify as value-added based and would represent a violation of WTO commitments.  If the United States tries to implement an inconsistent tax regimen, countries could appeal to the dispute settlement mechanism to reverse the measure or initiate countervailing investigations to compensate for the illegal subsidy received by US exports.  This would risk igniting a global trade war.

It is precisely the difficulties (domestic and international) encountered in the legislative and implementation process of the BAT that might have led Trump to invest in creating an environment to maximize the probability of a very unlikely Congressional success.  His statements against the North American Free Trade Agreement (NAFTA), that would be violated in the same manner, his threat about quitting WTO and his constant tweets intimidating firms that invest overseas have a clear objective: put everybody on notice that the tax negotiation will be ruthless and that countries and firms oppose it at their own risk.  Moreover, members of Congress are also being warned that it would be un-American to oppose a bill that allegedly favors investing and creating jobs in the US, no matter the international consequences.

To fully assess the impact of the tax regime change in the United States, one must take into account that countries can also modify their own tax system, above and beyond actions taken in WTO.  It would be reasonable to expect Canada and Mexico, the United States’ largest markets, to mirror these changes.  Other large trading partners would face more significant difficulties: China barely charges income tax so it would be difficult to reduce the tax burden on exports while the EU has no jurisdiction taxes so they’d need to be modified one country at a time.  Japan, on the other hand, is in a better position as it already has a subtraction method value-added tax.

Mr. Trump appears to abhor not only paying taxes but also international trade. Selling the tax reform in mercantilist terms is irresponsible and will only add to the widespread misunderstanding of international commerce and become the perfect excuse to introduce protectionist measures of all sorts.

Donald Trump appears to be willing to put at risk the entire international trading system to further his agenda.  Sooner rather than later, firms and countries will need to stand fast against threats and fight back to preserve freedom to trade and invest without undue interference.  However, he needs an early win to show his method works, otherwise markets, firms and countries will begin to realize that his threats and doubling down are empty (35 percent duties or quitting WTO are simply not credible, for example) and only part of a negotiating strategy.  This is exactly why nobody should want to go first, including Mexico, of course.

Luis de la Calle is former deputy trade minister for Mexico, and a Mexico Institute board member. The views expressed here are his own. 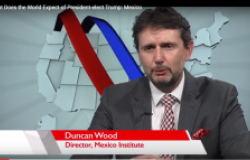 Video
U.S. Foreign Policy
What Does the World Expect of President-elect Trump: Mexico