What Does the World Expect of President-elect Trump: China

Q: What is the greatest challenge facing the United States’ relationship with China?

A: The acute issues—a nuclear North Korea and the security dilemma in the Western Pacific—may create the impression that the chronic challenge of U.S.-China relations is primarily military. Not so. The long-term difficulty President Trump faces vis-à-vis China is that Beijing, often in combination with Russia, wishes to legitimize illiberal alternatives to the liberal international order led by the U.S. China would like its domestic standards for the treatment of individuals, information, and institutions to be accepted as options to norms proffered by the United States and other modern nations. It pursues this goal not via the People’s Liberation Army, but (1) through networks of trade, investment, and aid which increase other nations’ economic dependence on China; and (2) through the purchasing power of its consumers, who are making China the tastemaker to the world. The challenge is complicated by the fact that the United States and most other nations benefit from economic relations with China.

China’s growing power cannot be squelched or ignored by the United Sates. Only Chinese domestic crises or Beijing’s mishandling of its foreign relations, both of which are possible, can hamper the trend toward greater Chinese normative, economic, and strategic influence worldwide.

Q: What will President Trump need to do to manage U.S.-China relations well?

A: The new administration should assume (1) that China’s economy will continue to grow despite stalled reforms; and (2) that the Chinese Communist Party will remain in control, despite the fragility of its system. President Trump’s National Security Council should conduct a comprehensive study of its ability to sustain the Rebalance to Asia, in light of: China’s growing economic and military strength; America’s looming structural budgetary crisis and low growth rate; the complexity of U.S. commitments and security concerns worldwide; and the willingness of American citizens to bear the cost of retaining strategic primacy in the Asia-Pacific. With that self-audit in hand, the new administration must determine its fundamental strategic disposition toward China. It no longer suffices to observe that U.S.-China relations are both cooperative and competitive. That is true, and important, but it’s no guide to policy. The Trump administration must define precisely what is at stake in American competition with China, and what is gained via cooperation, in order to determine, (1) whether the competitive and cooperative sides of the relationship are mutually supporting or fundamentally at odds with each other; and (2) how much competition the U.S. can afford. Only then can the Trump administration manage the challenge from China and ensure that liberal rules and practices remain the global norm.

While the Trump White House must be more hard-nosed than the Obama administration in its skepticism of China’s professed goals, and while it will be more hardline in some of its policies, it is essential that Trump appointees recognize that China is an uncertain, evolving power. China is not a mature, monolithic nation moving inexorably on an anti-American course. It is true that nationalism and authoritarianism are on the rise under Xi Jinping, but the complexity and urgency of China’s domestic challenges, constraints on its exercise of regional power, a diversity of Chinese elite opinion, and the modern dynamism of young urban Chinese indicate that China’s leaders must adapt to survive. Major policy questions in China, as in the U.S., are contingent and contested. The United States must not form China policy based on final judgments of Chinese intentions; it must remain engaged, informed, and agile in its diplomacy, because actions and attitudes of the United States will influence the choices China makes.

A: Analysts have suggested that China may “test” President Trump’s mettle early in his tenure. That is unlikely. Aspects of the emergent Trump China policy—de-emphasis of human rights, abandonment of the Trans-Pacific Partnership, willingness to rethink alliances with Japan and South Korea, a transactional approach to foreign policy generally—are encouraging to Beijing. Xi will not wish to dissuade Trump from these approaches by direct challenge in 2017, when Xi’s domestic policy agenda will absorb most of his energy. Rather, Xi is likely to give President Trump time to signal willingness to work with China. Should the Trump administration wish to convey such willingness, its options will be limited. President Trump cannot legitimize China’s claims in the South China Sea, abandon Taiwan, or break U.S. alliances in Northeast Asia. President Trump could, however, acknowledge that China’s rise and international influence are legitimate by expressing conditional support for one of Xi’s pet projects: One Belt, One Road. Without walking back any of his previous statements on China, President Trump could say he is confident that China can play a major and constructive role in the integration of Eurasia through infrastructure. He could add that, as long as OBOR projects are managed transparently and in accordance with international best practices in environmental protection and labor rights, the United States looks forward to working with China and other nations to build a more integrated Eurasia. Such a statement would convey that the United States welcomes China as a leading provider of global public goods—a theme that would cost President Trump nothing and could ensure a constructive atmosphere at the first Trump-Xi summit. 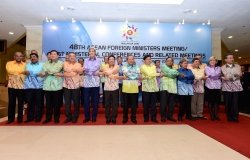 Article
What Does the World Expect of President-elect Trump: Southeast Asia
By Sandy Pho on November 19, 2016