Skip to main content
Support
Explore More
Close
Article
Economics and Globalization
Forecasting Instability: The Case of the Arab Spring and the Limitations of Socioeconomic Data
By Michael Gordon on February 8, 2018
Share on FacebookShare on TwitterShare via Email
SharePrint
Article

“Its likely uprisings are becoming an integral part of a new kind of Arab political culture,” writes David Ottaway, “It looks like these uprisings are here to stay.”

The Arab Spring’s legacy is proving to be irrepressible. Since mid-December, protesters in Sudan have been demonstrating in increasing numbers across the economically strapped country. They have been calling for an end to 30 years of repressive rule by Gen. Omar al-Bashir.

Sudan was a template for a successful Arab mass revolt.

Long before 2011 swept four autocratic leaders into the dustbin of Arab history, Sudan was a template for a successful Arab mass revolt. The first Sudanese uprising took place in 1964 just eight years after its independence from Britain. Another on April 6, 1985, toppled its military president, Jaafar Nimeri, while he was visiting the United States.

I was the last foreign journalist to interview Nimeri before his downfall. The unhinged Sudanese president had taken to consulting Sufi mystics for advice. I went to see him in the Sudanese Embassy here in Washington; he had come to beseech the International Monetary Fund and the Reagan administration to save his regime from financial bankruptcy. Nimeri never made it back home. He got only as far as Cairo, where he learned protesters and his military had barred his return. He remained in exile there for the next 14 years before finally being allowed to return. He contended for re-election against al-Bashir to no avail.

My April 3, 1985, interview with Nimeri, three days before his overthrow, started with a long rant against The Washington Post’s coverage of the daily street protests in Khartoum, Sudan’s capital. He complained that the demonstrations were being vastly exaggerated by my Post colleague, Jon Randal, who was on the scene. Randal was expelled two days later in the midst of a general strike that closed down the capital. Similarly, al-Bashir has recently started to expel foreign reporters, starting with those working for various Arab media, complaining bitterly about its exaggeration of his plight.

The way Sudanese protesters finally blocked Nimeri’s return from Washington was ingenious. Striking state workers cut off the electricity supply to the city’s international airport making it impossible for him to land safely. With that, the lights also went out on Nimeri’s regime. Sadly, the short period of civilian rule that followed Nimeri’s ouster ended when the military led by al-Bashir retook power in 1989.

The circumstances surrounding Nimeri’s downfall and those threatening al-Bashir with the same fate are quite similar. After 16 years in power, Nimeri’s regime had become bogged down in an unending civil war with rebels fighting for independence in South Sudan. The country was swamped in a morass of economic mismanagement. Today, al-Bashir has been in power close to 30 years, but the same two issues that sealed Nimeri’s fate are proving to possibly be his undoing. His regime’s economic downfall began after he agreed to South Sudan’s independence in 2011, depriving the government of its oil revenue.

Al-Bashir’s decision to triple the price of bread propelled Sudanese into the streets.

The specific detonator of the two uprisings is the same. Nimeri had decided to increase the price of bread 30 percent and gasoline 66 percent. Before this latest round of protests, after months of chronic shortages of basic food items, gasoline and local currency, al-Bashir’s decision to triple the price of bread propelled Sudanese into the streets.

The protesters were the same then as they are now—doctors, lawyers, professors, civil servants, students and the jobless. These Sudanese are using the same nonviolent tactics to rebel again against intolerable economic conditions and stifling authoritarian rule. One notable difference: In 1985 protesters had no access to social media to spread word of their rebellion; they had to rely on word of mouth.

Another parallel emerging in the two scenarios is the last-minute search for a foreign savior. Nimeri had come to Washington to plead with the IMF and the Reagan administration for more time to pay off Sudan’s $9 billion debt and relief from IMF-proposed cutbacks on government food and fuel subsidies. Today, the country’s foreign debt has reached $53 billion, and the Sudanese pound is worth less than half of its value after a devaluation last October has led to 70 percent inflation.

Instead of running off to Washington for salvation, al-Bashir went to Doha, the capital of Qatar. The country had already given al-Bashir $6 billion to prop up the Sudanese pound and help revive his bankrupt economy. The cry for help from Washington didn’t save Nimeri, and it remains to be seen whether Doha will save al-Bashir, either. Qatar’s ruler, Sheikh Tamim al-Thani, voiced support for the “unity and stability” of Sudan but made no mention of more financial aid.

It's likely uprisings are becoming an integral part of a new kind of Arab policial culture.

If the street protests in Khartoum lead to al-Bashir’s removal, it suggests the interval between successful uprisings in the Arab world is becoming considerably shorter. It took 26 years after Nimeri’s ouster for similar uprisings to bring down four other Arab leaders. Now, only eight years have passed before another government is teetering on the brink. It’s likely uprisings are becoming an integral part of a new kind of Arab political culture. And despite the resurgence of police states in the Arab world, it looks like these uprisings are here to stay.

This article was originally published in The Washington Post. 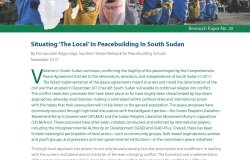