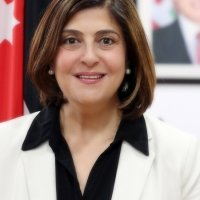 The main challenge in Jordan facing women’s leadership is related to women’s economic participation, which is quite low at 17.3% as of 2017. This is despite high education attainment among Jordanian women. So, if women are not present in public life, their access to senior positions in both Government and private sector positions will be automatically low. Today, women’s representation in the senior management category within the Government stands at 7.4%. This percentage covers all government ministries except for the Ministries of Education and of Health where women representation in leadership positions is relatively high, 55.97% and 52.88% respectively.

Despite the above, young women are paving their path with innovation and drive in independent areas of work such as technology and design. As such we also need to be open to new forms of leadership in the world of work.

Moreover, Jordan can claim a lot of progress. At a Cabinet level I am chairing the Inter-Ministerial Committee for Women’s Empowerment (IMC). The IMC was established in 2015 to provide leadership, coordination and accountability for action across the government on achieving commitments related to women’s human rights. This is concerned with ensuring that Government decisions are impacting men and women equally, develop a Government gender mainstreaming policy and liaise with the Senate, the House of Representatives as well as with civil society organizations on actions to be taken towards equality.

Recently Jordan adopted a 5 year  Women’s Economic Empowerment Action Plan  which  aims to increase women’s labor force participation rates to 24%  by 2025.  This will be done through enhancing the capacity of the Government to identify and address constraints to women economic participation; supporting the creation of family-friendly and non-discriminatory work environments; and enhancing the employment of women in the private sector and increasing the number of female-led MSMEs and cooperatives.

Moreover, the Government adopted the Jordanian National Action Plan (JONAP) for advancing the implementation of UN Security Council resolution 1325 on Women, Peace and Security (UNSCR 1325). The JONAP was developed in line with the Government’s commitment towards promoting and respecting human rights, justice, and equality. It also reiterated the importance of the role of women as key actors in preventing and combating extremism and violence.

Finally and one of the most recent achievements is the draft amended Jordanian Labor Law, which introduced adding clear definitions on “wage discrimination” and “flexible work”. This is considered a step forward towards pay equity and non-discriminatory practices between women and men in the workplace. Additionally, the amended law included an article that entitled fathers to a paid paternity leave of three days.

In general, I am quite optimistic. I feel there is a great momentum with all the above done where we will be able to instill critical change for improving women’s economic conditions.