Outline of the Future 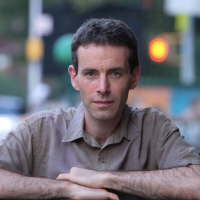 This piece first appeared on Kennan Institute’s Russian-language In Other Words blog. A few differences from the Russian, all approved by the author, appear in this English-language version.

Sixteen years ago, I quit my job as an American correspondent for NTV, a major Russian TV network owned by Gazprom, having come to the realization that while serving the interests of the network I was no longer serving in the interest of truth. It took me a while to accept this notion, which caused an identity crisis that might be akin to discovering one’s true sexual identity and facing the choice: to continue pretending to be someone else and deceiving oneself and others; or to attempt a coming out for the sake of inner peace, even at a high personal and professional cost.

It was around 2003–2004 when I first noticed that the stories I had been assigned to cover fell increasingly out of sync with those making headlines in mainstream American media. I hadn’t been asked to lie or twist facts—in my coverage I followed professional standards—but increasingly my editors were losing interest in topics reflecting the social and political landscape that shaped American life. These topics were deemed “too removed,” “too foreign” to the Russian audience. Instead, often irrelevant and entirely marginal figures and events were pushed into the foreground, where, under the spotlight of the network’s interest, they grew out of proportion, acquiring new context and meaning. Intentionally or not, by simply including these stories in its newscasts the network was stressing their importance. An anchor’s intro or outro would make a one-off event seem like a trend.

Meanwhile, reporting on anything Russian, particularly on Russia’s successes and accomplishments, had turned into an increasingly somber task. The light irony that was so characteristic of NTV’s reporting style had given way to dead seriousness. Grim-looking people (mostly in dark suits) were grimly focused on the monumental, grim task of lifting Russia from her knees. The unbearably relentless burden of their toil left no room for light-hearted coverage.

There was no place for a joke, even the most innocent one, when I reported from a street in Manhattan on the opening of Lukoil’s first American gas station. To mark the occasion, an outsized (and most likely armored) black vehicle delivered Vladimir Putin, who coincidentally (or not, but so conveniently for Lukoil) happened to be on an official visit to the United States. Looking even smaller than usual next to the massive car that brought him, Putin clearly felt out of place at a gas pump. He shook hands with employees clad in red-and-white company uniforms, mumbled something to a group of distinguished guests wearing Armani and Gucci, hastily rushed by a handful of reporters (all of them Russian), and left without so much as filling up his gas tank.

I can assure you that the tone of my coverage of that unforgettable event (and in fact, I haven’t forgotten it!) was radically different from the one I am employing now. My tone wasn’t necessarily servile, but the whole setup seemed so absurd that the simple fact of reporting on it with a straight face amounted to a distortion of reality.

When it came to reporting on American news or personalities, on the other hand, the rules were very different. Irony (and sometimes borderline scorn) was not only welcomed but encouraged. Suddenly there came a demand for stories that reminded me of the section “Their Mores” printed by nearly every major newspaper in the USSR to paint distorted pictures of the West.

Most of my editors in Moscow were too young to remember that section, and yet many story ideas they cheerfully chirped into my ear in their early-morning calls from Moscow seemed to have been lifted directly from it. In their case, the ideas came from Russian-language newsfeeds that the editors routinely monitored.

The central character of the proposed story was almost inevitably some oddball residing miles away from the bureau, but neither his oddness nor the distance was ever a limiting factor. The budget for such trips was readily approved, and soon we’d be driving or flying to produce a special report on, say, an engineer who’d spent decades developing a flying car of the future. The bright red, nifty-looking prototype would have been gathering dust for years in an outsized garage. Unable to achieve liftoff, the car would be rolled out to the “testing site” (i.e., the driveway in front of the garage), to the delight of an occasional visitor with a camera.

Other examples that come to mind include a story about the Texas secessionist movement and a feature article on a lawyer-turned-actor who claimed to be the best corpse impersonator in Hollywood.

To be sure, there was nothing wrong in covering these types of stories per se, but I’m sure you’d agree that if every other story coming from America was like that, viewers would start getting a slightly distorted idea about the country. And indeed, what could one think about a country populated entirely by people with bizarre ideas? A country with no politics or geography? A country where a bunch of misfits roamed the prairies, a secretary of state brandished a vial containing liquid, using it as pretext for war, and American soldiers relentlessly tortured detainees at Iraq’s Abu Ghraib prison?

Gradually, even stories of that nature receded into the background, giving way to stories about Russia’s magnified presence in the United States. From a complex and diverse country, woven out of dozens, if not hundreds, of languages and cultures, America had turned into a hollow space, a theater set populated exclusively by Russian speakers. The “global Russian” concept, which only a few years later would morph into the concept of the “Russian world”—Russkiy mir—made the emigrants, especially those who managed to make their way into the higher ranks of American society, particularly in demand among Russian media. Students who came to study at an American university and could testify to the clear advantages of the Russian educational system were also eagerly sought after.

Then came the turn of visiting young professionals from all corners of Russia working for American companies, of scientists hired by leading American labs, of athletes picked by professional American sports teams, of ballet dancers outperforming their American partners, and, of course, of newly minted Russian oligarchs signing multibillion-dollar deals.

Based on this coverage, one could easily come to the conclusion that the United States was a place where mostly Russian companies were getting listed on the New York Stock Exchange, mostly Russian theatrical groups were performing on Broadway, and mostly Russian films were discussed at Oscar ceremonies. Even on the day Hurricane Katrina devastated New Orleans, Russia remained front and center in the international segment of the Russian news, so much so that I was called away from the disaster area to report live on the arrival of a Russian oil tanker at a port near Washington, D.C., where Champagne was poured under the clear skies to the rousing strains of a live orchestra.

I am the first to admit that editorial policy is a delicate matter, and that there is such a thing as an honest mistake. For an observer on the other side of the globe, a mountain may well look like a molehill—especially if the observer’s binoculars are of poor quality. Reluctance to adjust the lenses is the first step toward trouble. The second step comes when the observer insists that “the big picture” is better perceived from a distance. The third comes when the person actually standing next to the mountain is being accused of having bad eyesight. And the fourth and final one is when the person standing next to the mountain reports with a maximal degree of conviction that what she clearly sees is a mountain is, in fact, a molehill.

In hindsight, everything seems so obvious, but back in 2006, an outline of the future remained vague. Vladimir Putin’s second presidential term was nearing its end. Columnists continued to write their usual columns. Opposition media continued to oppose the regime in their usual manner by offering platforms to former dissidents (now visibly aged), who seemed to be protesting merely out of habit.

Young, racy, and vibrant journalism had migrated to glossy magazines. To quote the Soviet writer and dissident Andrei Sinyavsky, the nature of their “disagreement” with the regime was purely “stylistic”—that is to say, entirely insignificant. Most of us expected that the outdated, bleak, and dull matter that somehow had seeped into the new century from the Soviet past would naturally die out. Just give it another five, seven, or ten years, and the Esquires, the Snobs, the GQs, and the Big Cities, those new beacons of hope, would win over the entire country.

As someone prone to introspection, I concluded that I must have fallen out of step with TV reporting. The impartial coverage I was taught to practice was no longer in vogue. Instead, there now appeared to be a demand for interpreting events through the prism of Russia’s geopolitical interests, preferably with the slightly condescending tone so typical of those who do not for a moment doubt their righteousness and can barely tolerate other people’s “naïveté.” That tone would be later replaced by an openly belligerent, insolent, and offensive barking, a by-product of the verbal fights on social media platforms that slowly but surely made its way onto the television screens.