Explore More
Close
Blog post
Economics and Globalization
Can Trade Be Moral?
By Boris Grozovski on May 16, 2022
Share on FacebookShare on TwitterShare via Email
SharePrint
Part of the Hindsight Up Front | Ukraine
Blog post

How do things stand for Russia today, two months into its invasion of Ukraine? We can discern three distinct theaters in which this war is unfolding: the actual battlegrounds, the economic theater, and the domestic political theater. With respect to the dynamics and prospects for the stability of Vladimir Putin’s regime, the three are closely linked, but the results of the two months of war vary fundamentally among the different theaters.

Military Theater: Defeat
The Russian army is flubbing it in Ukraine. After the blitzkrieg scenario failed, it became clear that the Russian army was completely unprepared for a major military campaign. There was barely any war plan, there were no reliable troop logistics, and apparently there was no unified command. The Russian army suffered enormous losses in manpower and equipment. After a month of fighting, Russia was forced to abandon its positions in northern Ukraine and abandon the campaign’s original plan and objectives.

That is a military defeat with enormous political consequences. After the 2008 Russo-Georgian War, President Putin made reform of the Russian military, its rearmament, and the modernization of its command structure a top priority. He increased Moscow’s defense spending dramatically, he reshuffled the military leadership, and he made a point of being personally present at the testing of new military weapons and equipment. He would often use his presidential addresses to advertise Russia’s newly developed weapons and impress the world with colorful demonstration videos. He publicly compared his years-long Syrian campaign to a sort of war game, one that allowed Russians to practice regional warfare tactics.

The Ukrainian campaign’s spectacularly botched opening phase has dealt a severe blow to Putin’s carefully curated image of a man capable of reaching his goals and organizing the effective use of force. Instead of a professional, modern army, the world has seen a bunch of untrained conscripts forced to serve under contract, a disorganized command structure, and miserable supply problems and logistical failures pointing to widespread corruption.

It remains unclear whether the Kremlin has been able to remediate those issues. Back on March 25, Putin’s generals announced new goals for their campaign: the Russian military, they said, would concentrate on “liberating” the Donbas and carving out a land corridor to Crimea. More than a month into the war’s second phase the new goals are as elusive as the old ones.

The war’s military theater has thus presented us with a textbook scenario. In order to mobilize failing support and demonstrate the regime’s effectiveness, an authoritarian government hatches a plan for a small victorious war—or a diversionary war, as political scientists term it. The war plan then hits a wall and devolves into protracted hostilities, betraying the regime’s many failings, deepening internal contradictions, and destabilizing the government.

Economic Theater: A Draw
This war’s second arena is the Russian economy. The Western alliance has responded to Russia’s aggression with unprecedented sanctions meant to undermine the Moscow regime’s economic might and make the war and the regime itself unpopular with the country’s citizens and elites.

Most Russia experts (including those working for the Kremlin and the Russian government) agree on the sanctions’ medium- to long-term effects. Russia’s GDP will contract by 8 to 12 percent this year. The country’s economy will experience a technical degradation and will retreat to the lower productivity and development levels characteristic of the upper tier of low-income to lower-middle-income economies. In April the Russian Central Bank published a report with a realistic scenario of how this might play out.

The sanctions’ short-term effect, though, has been much more muted. The Russian authorities managed to effectively stabilize the exchange rate, cope with the increased demand for consumer goods, and isolate the domestic financial market from external shocks. Surveys of manufacturers suggest that, even from a March perspective, production most likely is not going to decline. For a short period, the continuation of the prewar economic picture has played to Putin’s strengths in the eyes of the population, demonstrating his ability to withstand powerful external pressure. In April, the economic expectations of those polled remained rather optimistic.

Three factors have contributed to the current relative economic stability. First, over the past twenty-five years the Russian government has faced at least three crises, in 1998, 2008, and 2015, associated with a sharp decline in external revenues and capital flows, and has gained considerable experience in absorbing shocks of this sort. The fact that the Russian economy has been growing more isolated in recent years has also helped.

Second, on the eve of the invasion the Russian economy was in a recovery phase after a decline associated with the pandemic. Toward the end of 2021 and in the first months of 2022, Russia’s economy was growing at a 6 percent annualized rate, its best performance of the past twelve years. This was caused by a combination of a low base from which to grow and rising energy prices. Thus the Russian economy was in a favorable phase resulting from a combination of recovery growth and external revenues growth (oil and gas rents). This trend has cushioned the sanctions shock in March and April. Moreover, the decline in export revenues was not as significant as in previous crises.

None of this is to say that the risks of a large-scale GDP contraction and structural degradation, which economists are warning about, will not materialize. The Russian economy has had one leg and one arm broken, but the entire body is numb, as if under anesthesia.

Domestic Political Theater: Victory
A failed “small victorious war” would normally raise doubts about a regime’s competence and lead to its weakening. This time, however, we are witnessing the opposite: the regime has used the war as a signal to start a massive offensive against its real and potential domestic opponents. The regime destroyed the last remaining independent media, imposed almost Stalinist criminal standards on dissenters, deepened the arbitrariness of the judiciary, and made sure all antiwar statements are censored. In this theater of war, Putin can probably be awarded a tactical victory for now.

The regime has managed to block or suppress both the threat of an elite rebellion and the spread of mass antiwar sentiment. On the elite front, the reappointment of Elvira Nabiullina as head of the Russian Central Bank was an important symbolic success. There was a widespread belief among the elites that she had tried to resign in the early days of the war, but Putin not only did not let her go but made a point of reappointing her for a new term, demonstrating his control over his key elite allies.

Putin’s combination of repression and propaganda is quite effective at containing discontent in Russian society at large. Analysts often wonder at the effectiveness of Russian propaganda without taking into account that in rigid authoritarian and totalitarian regimes, this effectiveness relies heavily on repression. Essentially everyone in Russia is presented with a choice: whether to accept the propaganda line or, alternatively, to trust non-regime-controlled sources of information and, by doing so, expose themselves and their family to the risks of persecution and prosecution. As a result, going along with an official view even if it is unconvincing and does not accord with one’s personal beliefs is less life-threatening than questioning it. Putin’s signature combination of repression and propaganda is working. It doesn’t so much present convincing evidence of support for the war as it paralyzes society’s ability to resist the regime’s line. Moreover, it is the intensity of the regime’s offensive on the domestic political front that offsets the effect on domestic politics of failures on the actual battlefield.

What’s Next?
A decisive defeat for either side is unlikely. Even if the Russian army is incapable of mounting an overwhelming offensive, it will most likely be able to hold on to the territories already captured and even push the Ukrainian army out of the rest of the Donbas. Accordingly, the prospects for ending the acute phase of the conflict will largely depend on how events evolve in the three interconnected action theaters outlined above. In other words, it is the growth of internal threats and the weakening of the regime that may prompt the Kremlin to seek a compromise.

There is virtually no doubt that the economic situation will seriously deteriorate by the end of May or in June: the second wave of economic problems will hit the population. A realization of the Russian army’s losses will finally sink in too. Expectations of a victorious and relatively speedy end to the war will have been dashed. In this case, to what extent will Putin be able to sustain the achievements of the repressive-propagandistic consolidation of March and April? To what extent will he succeed in normalizing an economic crisis and daily repression? It looks as though Putin’s main problem in that moment won’t be the antiwar party but those conformists who like to reap a war’s benefits but dislike its costs. These are the people who cheer small victorious wars and enthusiastically supported the annexation of Crimea eight years ago. 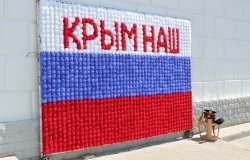 Blog post
Governance
Why the Kremlin Invaded Ukraine
By Vladimir Gelman on March 25, 2022