Syrian Women Dream and Get Organized 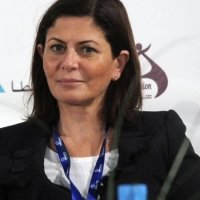 Eight years have passed since the peaceful Syrian revolution started in March 2011, which quickly turned into armed conflict and civil war--and hence into a global geopolitical proxy conflict with various parties wanting a piece of the cake. I remember clearly the first calls for freedom in Damascus and how the nonviolent movement started; how women especially and the youth were then deeply involved from the revolution’s inception. Yet in times of armed conflict, the presence of women often ebbs and as the violence escalates, they become hardly visible.

Today, despite the oft seen male dominated public narratives, women remain key players. I’ve just returned from a trip to the Turkish border, where I visited my organization’s women centers, “Tastakel,” in two main cities Rihanieh and Gaziantep as well as the refugee areas. I saw first-hand how these women are resilient, full of ambition, and active. They want to learn, they want to advance.

In the Syrian conflict, so many women have had to wear too many hats. They worked on many fronts, even if not always so upfront. Women involved in politics also worked on humanitarian issues, advocated for detainees, and lobbyied for human rights and other issues. Many are involved in education, the media, law and medical care. After eight years of war, with millions of refugees, more than half million people dead, 250 thousand detainees, and a lost generation with no education, Syrian women continue to fight the good fight. They still have their peaceful boots on the ground and are still dreaming of having a new democratic Syria that we all aspire to create together.

When I served on the High Negotiation Committee in 2016 and 2017, one of our demands was to have a quota for female participation in negotiations on Syria. My colleagues and I pushed our committee to recognize a minimum of 30 percent female participation, a vision we strove for and successfully announced in London September 2016. Of course, we cannot achieve our goals if we are not organized.

In the fall of 2018, we also met to discuss women’s activities and decided to create a political women’s movement,  the Syrian Women’s Political Movement, which centered on creating an organized political movement for women working for democracy in Syria with an emphasis on women’s participation and increased role in decision-making. This movement includes Syrian women from all walks of life; they are from different regions and varying ethnic and religious backgrounds. It includes women both young and old. It includes activists, lawyers, doctors, journalists and teachers.

Thanks to the European Union and Canada’s support, we could continue to work. Because of new technology we are able to communicate together and meet in different ways on social media and Skype at least once a week including having lecturers to empower the young participants and to teach us all how knowledge can be our power.

Membership in this group now numbers at around 100 participants. This group also includes men; as representation for women improves the lives of men just as it does women. We have also established a democratic system to elect and choose the participants.

Today, eight years since the beginning of the first call to freedom, with all of the destruction across Syria, I can see a light at the end of the tunnel. The Syrian women who decided that despite all the losses they have suffered, they will hold onto to their integrity, and with the help of each other, will create a new Syria.

Thinking of writing a new constitution, and getting organized for the election, we coordinate and know the importance of working on a new social contract in our new Syria. Women of Syria are going to be the hope of our country. Our message to the world is exactly what Ghalia whispered into my war last week in Gaziantep: “despite being wanted by both the regime and radical groups in Idleb,  I will be working, and I will never stop to have my Syria back. The one I dream about.” Ghalia is a determined and strong woman who lost her beautiful son and many members of her family including my friend and hero, the nonviolent activist Raed Fares.

Yes, Syrian women are organizing, and they will keep dreaming despite the skepticism around us. We are dreaming the impossible dream and as the song we like to sing, Don Quixote’s Impossible Dream reminds us, it is in some of our darkest nights when we lose people we love, and see the destruction of our beautiful country that ideas of freedom and democracy live strong. That’s why we decided to keep working and get organized.”

Deputy of the Head of the office of the Syrian Negotiation Committee in Geneva, a visiting scholar at Harvard Law school negotiation program and the Director of the Interfaith Peacebuilding and an adjunct Professor at the Center for World Religions and Diplomacy at George Mason University
Read More