Women on the Rise in Kurdistan 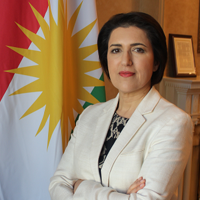 ... building a society in which women and girls enjoy equal rights to men and boys requires a combination of progressive policies and laws and targeted public campaigns aimed at changing cultural mindsets.

There is no silver bullet to advance women’s rights in the Middle East. As we in the Kurdistan Region in Iraq have discovered, building a society in which women and girls enjoy equal rights to men and boys requires a combination of progressive policies and laws and targeted public campaigns aimed at changing cultural mindsets.

Kurdistan is a conservative society that has endured decades of conflict in a turbulent part of the world. In Iraqi Kurdistan, in 1992 we began to have a form of self-rule after decades of dictatorship under Saddam Hussein. This was later recognized in the Iraqi constitution of 2005. This autonomy has enabled the Kurdistan Region to develop its own legal framework while still operating within Iraq and, in many ways, our society has evolved at a different pace.

Honor killings are treated as murder, human trafficking, female genital mutilation and child-marriage are outlawed and polygamy is allowed since it is accepted in Islam but only by adhering to the strictest rules. Not surprisingly, women’s rights groups argue that polygamy should be outlawed too and the current law doesn’t prevent men from marrying a second or third wife in another part of Iraq and bringing them to Kurdistan.

Nevertheless, these laws have come about through societal changes and vocal and consistent demands by women from all walks of life. Kurdish women, who played a significant role in the resistance against Saddam Hussein, are not willing to accept second-class status. There are many women’s rights activists, female academics and women-led NGOs that lobby, promote awareness of inequality and injustice and raise the alarm when necessary - which sadly we still need.

The Kurdistan Regional Government is aware of the shortcomings and remains committed to advancing women’s rights. The status of women in Kurdistan has come a long way. There is a quota of 30% female members of parliament, the main political parties include women in their leadership, and there are female cabinet ministers and envoys abroad. The speaker of our parliament is the second woman in succession to hold that post, which is a rarity in the Middle East.

Some argue that these women lack real power and that negotiations and big decisions remain an all-male domain. This is true to some extent but these women do have clout, act as role models paving the way for greater female participation, and encourage young men and women to see that equality is within reach.

While a great deal remains to be done to achieve equality - in politics, business and media, among other areas - it cannot be denied that there are more women in prominent roles in government and parliament, education, security forces, science and cultural roles today than ever before in Kurdistan.