Zoonotic Diseases and the Possibilities with EBV Monitoring

Now more than ever, we, as a society, need to examine all of the underlining ways that climate change, as well as overpopulation, are effecting every aspect of our existence.  Its environmental and economic impacts are still being understood and recorded as people begin to fear the repercussions.  One line of research that should be emphasized in these changing times is the virology and pathology of the emerging infectious diseases known as zoonotic diseases.  To fully address this problem, a successful and expansive monitoring of Essential Biodiversity Variables or EBVs could serve to mitigate the trajectory of these vicious diseases.

About Zoonosis: A Recent History

HIV, Rabies, and Influenza are all examples of zoonotic diseases or as they are commonly referred to as zoonoses.  Zoonoses, as determined by the World Health Organization, are “any disease or infection that is naturally transmissible from vertebrate animals to humans and vice versa” and by the Centers for Disease Control and Prevention as just “a disease spread between animals and people,” including some diseases harbored by mosquitos and ticks [1,2].  HIV has been traced to a chimpanzee to human transmission event in Cameroon [3]; rabies is constantly transmitted from urbanized animals like raccoons, bats, and dogs to each other and humans [4]; and Influenza, specifically the A strain, is transferred to humans via hosts such as pigs, birds, and horses [5].  All zoonoses, all serious illnesses.

The term zoonosis was first coined in 1855 by Rudolf Virchow who was studying a parasite that affected a plethora of mammals including humans.  In light of human overpopulation and a shrinkage of wildlife environments, zoonotic events will only increase.

The Centers for Disease Control and Prevention (CDC) reports that 3 out of 5 “new and emerging” infectious diseases are classified as zoonoses [6].  Other articles report around 70% and the World Health Organization (WHO) published a paper citing that 75% of all emerging pathogens in the past decade have come from a zoonotic event [7,8].  This new emphasis on zoonotic diseases is also evident through the increases in scholarly publications with the word “zoonosis” or “zoonotic” in the topic section.  After searching for zoonosis and related keywords on Web of Science the amount of articles published annually has drastically increased from 30 in 1990, 175 in 1997, 721 in 2007 to 2,092 published last year (see graph) [9].  More research is being conducted on zoonotic events partly because of its relevance in the collective consciousness after epidemics like SARS in 2003, Swine Flu in 2009, Ebola in 2014, and Zika in 2015. 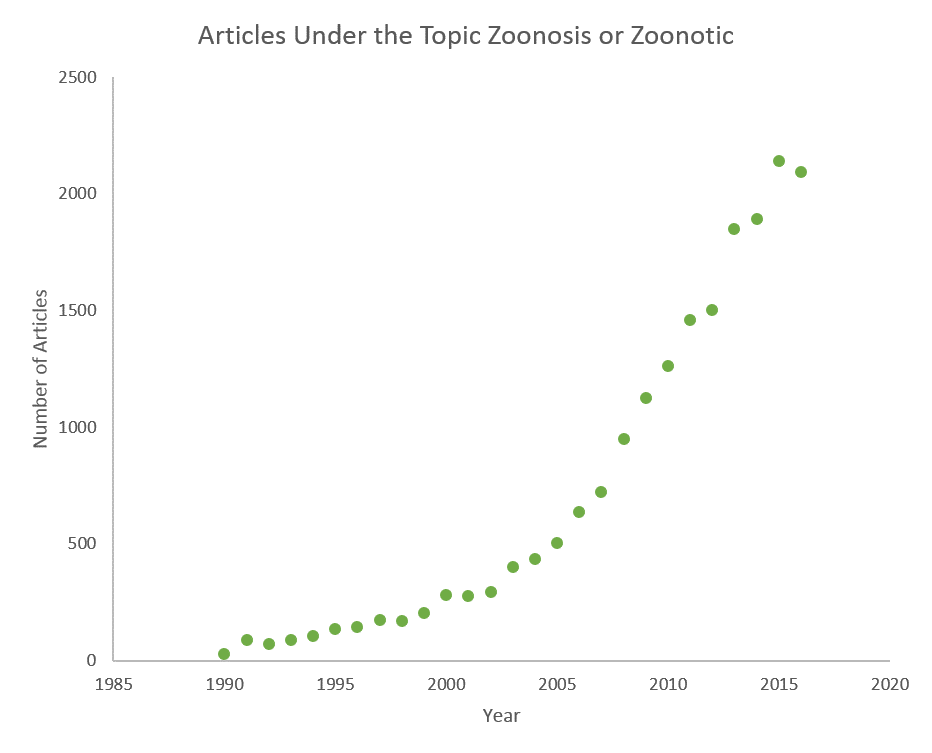 Important accelerators of zoonosis include climate change and mankind's exhaustion of resources.  As habitable land become smaller for a diversity of species, population migration is a necessary tool for survival.  These migrations lead to new ecosystem dynamics between animals that previously had minimal interaction.  Sometimes these ecosystems overlap with human inhabited areas making zoonotic events more likely [10].  This is increasingly problematic especially when a virus's rapid mutation rate is taken into consideration.

In regular human cells, cell replication is an intricate process that has many different mechanisms for “correcting” mutations within a genome.  Uniformity in genetic data is critical to cellular replication.  Human (eukaryotic) cells usually have a mutation rate of 10-8 substitutions per nucleotide per nucleotide per cell (s/n/c) which is relatively low and not taking into account the enzymes devoted to monitoring and fixing the new DNA.  Viruses, on the other hand, have higher mutation rates coupled with an almost complete lack of corrective mechanisms and a higher rate of mutation: 10-6 s/n/c for DNA viruses and 10-4 s/n/c for RNA viruses [11].  The influenza virus is notorious for its consistent evolution, made apparent by the new flu vaccine that is synthesized and rolled out every year.  Mutations can change the envelope of the virus which can then expand the virus’s host specificity, allowing for the transfer of a virus from one species cell to a different species cell.  This is the reason that swine flu, avian flu, HIV, Ebola, and other diseases are so threatening. 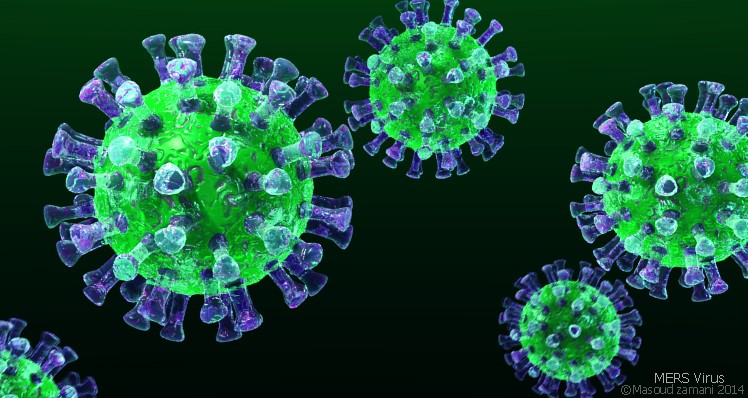 Because of the demonstrated need for a greater understanding and awareness of these types of diseases and infections, multiple centers and working groups have been formed to try and combat and understand these types of diseases. For example, Homeland Security has teamed up with Kansas State University to form the Center of Excellence for Emerging and Zoonotic Animal Diseases, the CDC’s collaborative One Health program, and even Germany’s Federal Office of Consumer Protection and Food Safety, have taken matters into their own hands in monitoring for these new threats [12,13,14].  Organizations like these track known zoonotic diseases and try to prevent future ones from making an impact on global health.

One Health is probably the most renown of these institutions because of its network and scope.  Even though it achieved its permanent residence at the CDC in 2009, the organization and the work done promoting “One Health” is cited back to Charles Schwabe in 1964, a veterinarian who coined the term “One Medicine” in order to emphasize and promote research into the link between human diseases and those of animals.  Not until 2004 did the Wildlife Conservation Study come up with the Manhattan Principles which laid out specific goals to integrate global understanding of the transfer of disease from animal species to human populations [13].  Now under the direction of the CDC, One Health has partners at home (both within and outside government control and funding) and abroad including the World Health Organization, The World Organization for Animal Health (OIE), and the Food and Agriculture Organization for the United Nations.  One Health’s overall mission is to protect and monitor the world in response to human population expansion, climate change, and international travel. 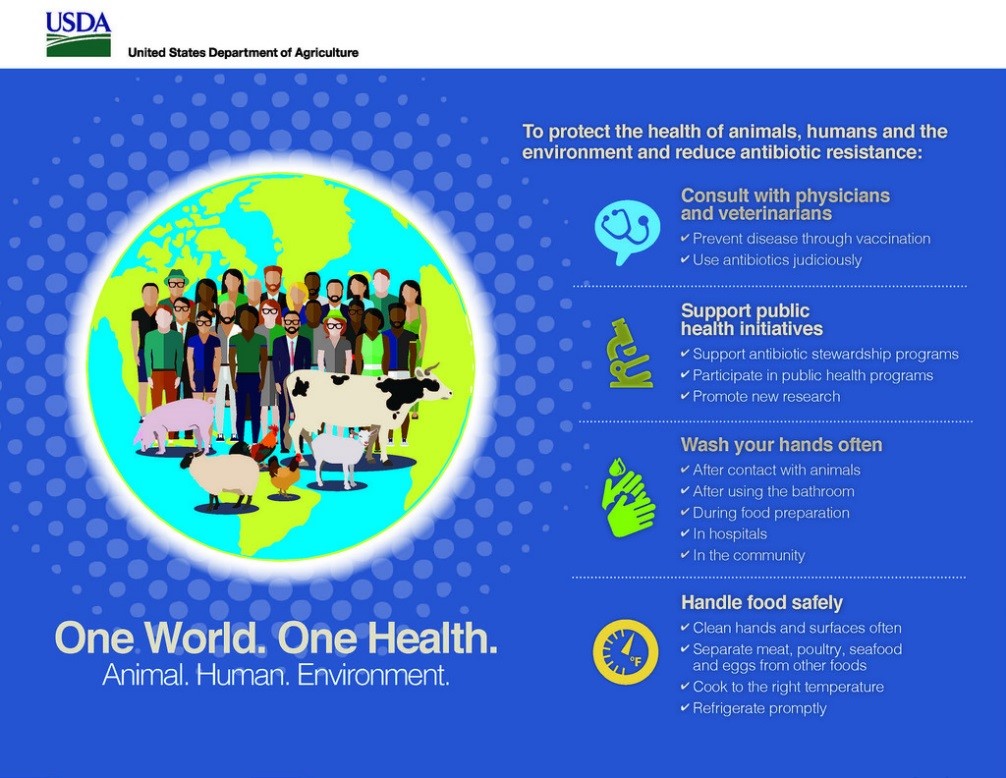 Climate change as well as human overpopulation and industry have drastically altered environments and changed the population dynamics.  These changes are important to understanding new ecosystem interactions but are largely ignored by the organizations tasked with zoonosis research. Organizations, like the previously mentioned One Health, are looking at specific zoonotic diseases like Rift Valley Fever or Zika. But what they are not always doing is monitoring the general environment around the disease vectors. Without sufficient evidence that a species or area is under the threat of a disease, these organizations redirect their resources to locations of high risk.

But lands that are currently seen as low-risk might be seen as higher risk down the road. This has already been observed with the spread of tick-borne diseases moving northward as the climate in the Northeast becomes more hospitable for deer ticks and other vectors. The framework on monitoring essential biodiversity variables (EBVs) could be an effective tool for monitoring and predicting zoonotic events by keeping a running record of the biodiversity of most if not all US lands.

The concept of Essential Biodiversity Variables (EBVs) was first advanced in 2013, in emulation of ECVs or Essential Climate Variables [15].  EBVs are organized into six main classes: genetic composition, species populations, species traits, community composition, ecosystem structure, and ecosystem function. The primary purpose of this coordinated monitoring is to observe and document the changes in biodiversity to understand biological change. But EBVs could also be used to collect data on environmental health indicators that are necessary to survey in the event that a zoonotic event occurs.

The CDC put out a report in 2010 about the potential risks climate change could pose in relation to the threat of new zoonotic diseases.  In it, authors James Mills, Kenneth Gage, and Ali Kahn express a need for monitoring of range shifts or permanent migrations of wildlife. The depressing lack of national scale, easily accessible historical baseline or current data on the biodiversity of target areas acts as a logistical impediment [16]. This can be partially addressed through data mobilization efforts, including coordinating the historic data that does exist and digitizing museum specimens [17]. At the same time, we need a holistic framework such as EBVs to give meaning and structure to these efforts and facilitate comparison across time.  It is unfortunate that legacy biodiversity data does not always exist, but this should encourage policymakers, researchers, land owners and other stakeholders to commence a robust monitoring network now.  Data digitization and aggregation are proving to be cumbersome, often requiring significant funding, time, and technical expertise. Moving forward, coordinated national-scale efforts can improve science while saving money and researcher time.

Climate change is not going away. The scientific community along with the government should be acting now to employ the EBV framework to monitor long-term biodiversity change rather than conducting only short-term surveillance procedures that cannot be put in historical context at some later time.  As zoonosis demonstrates, changes in biodiversity variables such as species distribution, population size, species interactions, migratory behavior and physiological traits can have a direct impact on human health. EBV surveillance could be conducted by NGOs and government organizations alike. But a sometimes overlooked stakeholder in this research is the public, the people who are susceptible to these zoonoses like Lyme disease and rabies.  Harnessing all of these stakeholders could be the key to impactful EBV monitoring.

Researchers have postulated that a centralized reporting mechanism could help organizations detect emerging diseases within the environment that could contribute to the treatment of the disease before it is able to cross over [18].  Just as the EBV framework provides structure for reporting, citizen science can help realize reporting at scale. Zhu et al. (2011) argue that with a citizen accessible reporting network, West Nile virus may have quelled by people reporting crow deaths in their backyards.  If the data are available, outbreaks can be traced back to the original source. Thus giving researchers the proverbial breadcrumbs needed to reveal not only the origin of the zoonotic event, but also potentially relevant information that could assist in the treatment and prevention of the disease.

Partnerships between organizations like the CDC or NIH have the potential to use well established connections with universities and NGOs to combine necessary EBV surveillance with the pursuit of better human health and wellness.  These organizations can pool their resources and use community outreach mechanisms to promote EBV monitoring throughout communities across the United States. Such partnerships will better prepare the United States for quickly evolving and potentially fatal diseases and infections that lie just around the corner.  When it comes to zoonotic disease and events, reactive policy is not nearly enough.  Each new virus poses new threats to new victims in new environments.  And while we may forever be one step behind the next big virus, EBV monitoring can give us a crucial head start. 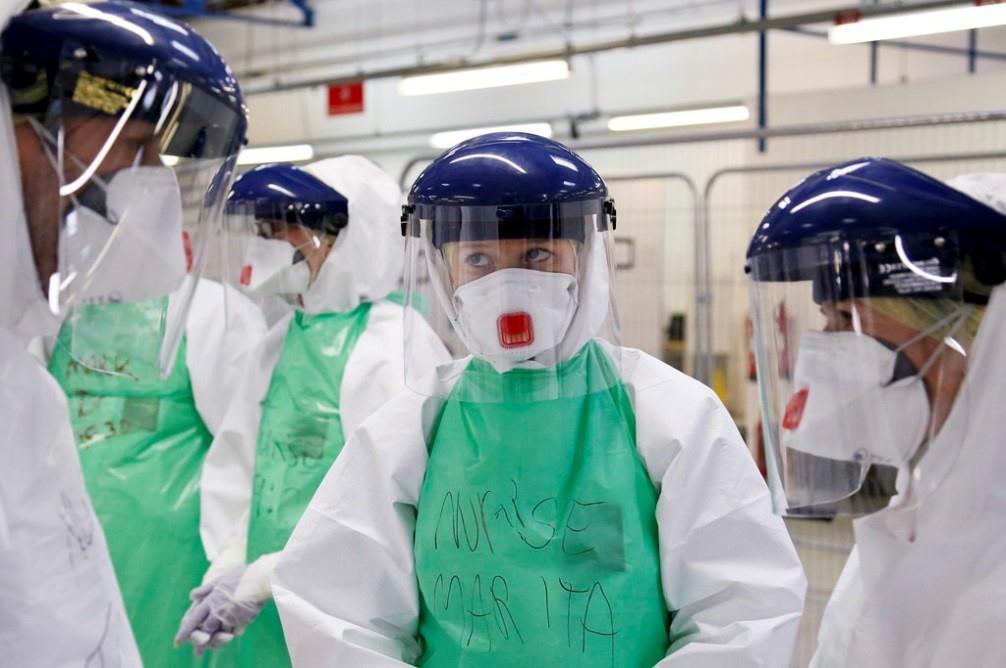 Update: A previous version of this blog post suggested that African swine fever (ASFV) is zoonotic. In fact, the zoonotic nature of ASFV is open to debate. See additional references [A] and [B] for two contrasting viewpoints.