Beyond Gender: The New Politics of Work and Family 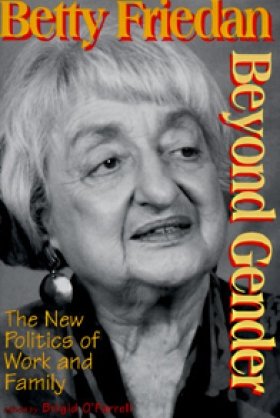 “A basic restructuring of our economy is needed now,” writes Betty Friedan in her latest book, Beyond Gender. “And this restructuring can’t be accomplished in terms of women versus men, black versus white, old versus young, conservative versus liberal. We need a new political movement in America that puts the lives and interests of people first. It can’t be done by separate, single-issue movements now, and it has to be political to protect and translate our new empowerment with a new vision of community, with new structures of community that open the doors again to real equality of opportunity.”

As the author of The Feminine Mystique and head of the National Organization for Women, Betty Friedan helped spark a movement that revolutionized the fight for equal rights and opportunities for women. Now, in Beyond Gender: The New Politics of Work and Family, Friedan argues that the old solutions no longer work. The time has come, she contends, for women and men to move forward from identity politics and gender-based, single-issue political activism. Without yielding on particular women’s issues, she calls for a “paradigm shift”—a transformation of the intellectual and political structure within which those issues are viewed. Friedan’s “new paradigm” embraces the entire world of work, family, and community, where some of the most crucial questions of 1990s America have been raised. To explore them, Friedan initiated a conversation among policy experts, scholars, corporate and labor leaders, journalists, and political thinkers. Guiding their conversation with her own reflections, Friedan explores the social anxiety caused by corporate downsizing and displacement of middle-aged male employees—including the impact on working wives who suddenly become their family's sole provider. She confronts the expansion of part-time and temporary work due to outsourcing, which disproportionately affects women workers. She describes the loss of community life and community space in the fast-paced, consumption-oriented suburbs. And she discusses the breakdown of family structure in many parts of American society.

Betty Friedan (1921–2006) was a leading advocate for women’s rights and author of The Feminine Mystique and The Fountain of Age. She was Distinguished Professor of Social Evolution and Director of the Center for Women, Men, and Social Evolution at Mount Vernon College in Washington, D.C., and an adjunct scholar at the Woodrow Wilson International Center for Scholars.

6. The New Paradigm and Family Values

“Betty Friedan’s Beyond Gender breaks through the old schisms and divisions and gives us a new context for discussing a common agenda. Her book opens the door to a new debate on the relationship between family, the workplace and society that could help reshape the national agenda in the coming century.”—Jeremy Rifkin, Author of The End of Work: The Decline of the Global Labor Force and the Dawn of the Post-Market Era

“With her usual clarity and perception, Betty Friedan explores the forces working against the family, and how fathers and mothers, employers, communities, and our country’s policy makers can begin to give our children all they need to become healthy, productive, and secure adults.”—Marian Wright Edelman, President, The Children's Defense Fund

“Betty Friedan slices right to the heart of what is perhaps the biggest problem we face. The rich are getting richer and everyone else is barely holding on or sinking. The right wing is calling on people to blame their troubles on the down and out. And progressives are too divided to push back. Friedan begins to piece together a brilliant solution. Every person of conscience should read this book and get on the bandwagon. I’m there.”—Arlie Russell Hochschild, Author of The Time Bind: When Work Becomes Home and Home Becomes Work

“Betty Friedan sparked the women’s movement with The Feminine Mystique. With this book she seeks nothing less than to shift the paradigm of gender politics beyond issues of women versus men to address the needs of people—as family members, workers, and citizens.”—Douglas J. Besharov, Resident Scholar, American Enterprise Institute for Public Policy Research

“An energetic presentation of conservative and progressive ideas on creating a more liveable society—spiked with the spirit of Betty Friedan who pokes and prods us all to get out of our traditional political boxes and work together for the common good.”—Susan Bianchi-Sand, Executive Director, National Committee on Pay Equity, Chair of the Council of Presidents of National Women’s Organizations