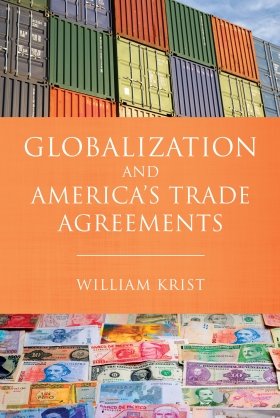 Globalization and America’s Trade Agreements is a valuable guide for newcomers to trade policy and a challenging critique of trade policy for those already knowledgeable. In this book, William Krist reviews the impact of the United States’ complex trade agreements of the past 25 years and examines the issues in recent rounds of GATT/WTO negotiations and numerous free trade agreements. He describes agreements’ frameworks and historical contexts, economists’ approaches to agreements, and the effect of historical trade experiences on economic theory. Krist also assesses trade deals’ impact on the U.S. economy and on the economies of developing countries, and he reviews the roles of foreign policy, environmental concerns, and labor issues.

Trade has been an essential driver of global growth. Krist shows how trade policy has contributed to that growth and outlines what must be done to ensure that it can continue to promote our national objectives.

Wiliam Krist is a senior scholar at the Wilson Center. During his career, he was an Assistant U.S. Trade Representative, a legislative assistant for both a congressman and a senator, and an advocate for the high-tech industry.

7. Uneasy Neighbors: Trade and the Environment

“I would rate this work as very important and needed. The reader is given a very good understanding of post-World War II policies and the global context in which they have functioned.”—Ambassador Alan Wolff, international trade lawyer, former Deputy U.S. Trade Representative

“The history of specific trade arrangements and their geopolitical context are crisp and contain useful narratives.… Recommended.”—Choice