Illegal Drugs, Economy, and Society in the Andes 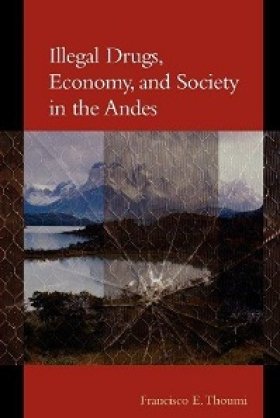 Some countries develop illegal drug industries, and others do not. Discerning the distinguishing characteristics—social, economic, and political—of countries with these industries forms the subject of this sophisticated and humane study.

The author, Francisco E. Thoumi, though trained as an economist, rejects simplistic economic solutions as well as simplistic moral ones as he addresses the Andean countries of Peru, Colombia, and Bolivia and the attitudes and responses of the United States. He investigates how the United States and the Andean countries perceive drug issues; the history, structure, and evolution of drug industries in the Andes; the size of the industries in Peru, Colombia, and Bolivia; and their economic, political, and social effects in each country.

Thoumi also addresses the political systems and social characteristics of these countries and why they have been so vulnerable to influence from these industries. And he offers case studies of a variety of antidrug efforts including crop substitution and alternative development, eradication, interdiction of illicit traffic and manufacturing facilities, and extradition to the United States of traffickers.

Francisco E. Thoumi received his Ph.D. in economics from the University of Minnesota. He has been a professor at the Universidad de Los Andes, in Bogotá, California State University, and the Universidad Nacional de Colombia, and has worked for the World Bank, the Inter-American Development Bank, and the United Nations Office of Drug Control and Crime Prevention. He is a member of the Colombian Academy of Economic Sciences.

Part IV. Antidrug Policies
10. The Nature of the Drug Policy Problem
11. Policy Case Studies of Alternative Development in Bolivia and International Cooperation in Colombia
12. A Short Survey of Antidrug Policies in the Andes and Policy Conclusions

“Contributes significantly to the literature, but it especially stands out in its logical organization, comprehensive coverage, broadly multidisciplinary approach, and systematic and comparative analysis.”—Waltraud Queiser Morales, Latin Americanist

“Strong in organization, multidisciplinary approach, and comparative analysis, this volume is a comprehensive overview of the Andean drug problem.”—Choice