A Rift in the Earth: Art, Memory, and the Fight for a Vietnam War Memorial 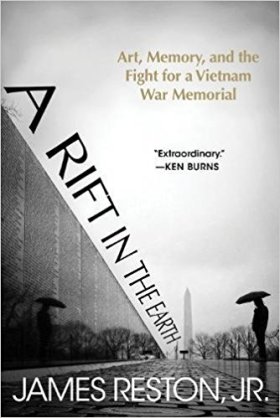 Book Discussion: A Rift in the Earth: Art, Memory, and the Fight for a Vietnam War Memorial

A Rift in the Earth tells the remarkable story of the ferocious "art war" that raged between 1979 and 1984 over what kind of memorial should be built to honor the men and women who died in the Vietnam War. The story intertwines art, politics, historical memory, patriotism, racism, and a fascinating set of characters, from those who fought in the conflict and those who resisted it to politicians at the highest level. At its center are two enduring figures: Maya Lin, a young, Asian-American architecture student at Yale whose abstract design won the international competition but triggered a fierce backlash among powerful figures; and Frederick Hart, an innovative sculptor of humble origins on the cusp of stardom

"Reston retells the story dramatically, dredging up material that many of the players in this drama might wish to remain forgotten."—Washington Post

“In A Rift in the Earth, Army veteran James Reston details the controversy surrounding the creation of the Vietnam War Memorial -- an undertaking that reopened political, moral and cultural divisions about the war long after its end. Deeply personal, as moving as it is instructive, Reston’s account captures the complicated struggle that ensued over how to honor our Vietnam War veterans, and reminds us that in the decades following that bloody and protracted conflict, a generation of Americans continue to find healing at the powerful memorial in our nation’s capital.”—Senator John McCain

"The Vietnam Memorial Wall would never have existed if a handful of angry Vietnam Veterans and their influential allies had won their fight to kill the project a generation ago. Reston's riveting history of the battle for Maya Lin's unconventional and moving monument brings to life the personalities on both sides as well as the emotions that galvanized such intense disagreement and mirrored the deep rift of the war itself. Equally powerful is Reston's final "Author's Reflection," about his journey to Vietnam today to recapture the last days of a friend killed in Hue whose name is on the Wall."—Myra MacPherson, author of the bestselling Long Time Passing: Vietnam and the Haunted Generation and the award-winning All Governments Lie: The Life and Times of Rebel Journalist I. F. Stone