Students from OHIO University will play and debate their results from the newly updated online game, Budget Hero: Election Edition. (This event takes place at Ohio University in Athens, Ohio).

Public opinion polls consistently show Americans ranking the federal budget deficit as one of the most important issues in the coming election. But amid today’s partisan rancor, where can Americans go for unbiased information on the policies proposed for addressing growing public debt? How can you see first-hand the trade-offs inherent in putting together the federal budget?

On October 11, students at OHIO University will see how long it takes their budgets to go bust when they play and discuss the “serious game” Budget Hero: Election Edition. Created by the Woodrow Wilson Center’s Serious Games Initiative with data from the Congressional Budget Office and a wide variety of other vetted sources, the online game serves as a nonpartisan tool for engaging the American public in the debate over our federal budget. Participants will be playing the new Election Edition of the game, which includes the policy proposals of President Obama and Governor Romney as well as dozens of new policy options. 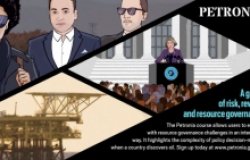