“There is no magic bullet or solution to resolving climate change quickly,” said the Population Reference Bureau’s Jason Bremner at the Wilson Center on October 28. “Our next 100 years will be far different from the last 100 or the last 1000…and it has become clear that nations will have to pursue many strategies in order to reduce emissions, build resilience, and adapt.”

“There is no magic bullet or solution to resolving climate change quickly,” said the Population Reference Bureau’s Jason Bremner at the Wilson Center on October 28. “Our next 100 years will be far different from the last 100 or the last 1000…and it has become clear that nations will have to pursue many strategies in order to reduce emissions, build resilience, and adapt.”

One of these strategies for climate-compatible development, according to Bremner and other members of a new collaborative effort, is increasing access to family planning on a global scale.

By the end of the century, demographers predict the world will be home to between 9 billion and 12 billion people. Meanwhile, hundreds of millions of women around the world want access to family planning but do not have it. Where world population ends up, which is in part dependent on how quickly reproductive health services reach underserved areas, will have immense ramifications for humanity’s ability to mitigate and adapt to climate change.

To better link reproductive health and climate change, the Population Reference Bureau and Worldwatch Institute recently gathered a diverse group of development practitioners, scientists, and donors from around the world to create a Population Dynamics and Climate-Compatible Development Expert Working Group. Its premise, said Bremner, is that efforts to expand access to family planning, adapt to and mitigate climate change, and fight global poverty overlap in key ways, and the three communities should work together to incorporate access to voluntary family planning into climate change policies.

The working group framed its recommendations from a women-centered, rights-based perspective and was guided by a series of basic principles, said Bremner. Individuals and couples have the right to make their own family choices, and local participation in climate-compatible development is critical. Furthermore, all societies should be able to develop in ways that promote human well-being while also participating in the fight against climate change.

Climate-compatible development has two complementary goals, said Alexander Ochs of the Worldwatch Institute: to mitigate climate change by reducing greenhouse gas emissions while increasing the capacity of people, communities, and countries to adapt to climate change and extreme weather.

In prior research, working group members Karen Hardee (Population Council) and Clive Mutunga (USAID) found that reducing unintended pregnancies provides health, education, and economic benefits to women and their families, increasing their capacity to adapt to climate change. This is especially important in many developing countries, which face the greatest impacts from climate change while having the fewest resources to adapt.

In addition to the adaptation benefits, access to family planning also provides mitigation benefits, said Hardee. Research by the National Center for Atmospheric Research’s Brian O’Neill found that slowing population growth from the UN’s medium fertility projection to the low projection could reduce projected carbon emissions from 9.2 billion tons to 8 billion by 2050, equivalent to eliminating all deforestation.

“There is increasing recognition of the links between family planning, reproductive health, and climate change,” said Mutunga, but that hasn’t necessarily translated to action.

The Intergovernmental Panel on Climate Change’s 5th Assessment Report referenced access to voluntary family planning as a method for reducing emissions and improving health. Major development organizations have also made the link. Secretary Kerry has directed USAID to incorporate climate change considerations into all its plans, and family planning is considered a component of a larger strategy of building resilience at the individual, community, and country levels, said Mutunga.

Despite this recognition, Hardee said family planning is often still treated as a sensitive issue when it comes to implementation. When then-Secretary of State Hillary Clinton remarked in 2009 that “it’s rather odd to talk about climate change and what we must do to stop and prevent the ill effects without talking about population and family planning,” she was criticized by other world leaders, said Hardee.

When speaking to women and policymakers in developing countries, however, Hardee and Mutunga said they find real demand. Hardee noted that Eliya Zulu of the African Institute for Development Policy had emphasized to her, “African women are saying for themselves that they want to have fewer children.”

Of the 41 National Adaptation Programs of Action (NAPAs) – plans prepared by the most vulnerable developing countries to gain funding for climate change programs – Hardee and Mutunga found that 37 included population as a concern related not only to climate change, but also water scarcity, food security, health, and migration.

It was “heartening to see that the majority of them make the link,” said Mutunga, but “linking the policies into the programs is the challenge.” Only 6 of the 41 NAPAs actually included access to family planning as a part of their adaptation strategies, only two identified specific projects that would incorporate it, and none of those projects were funded.

Part of the challenge, according to Hardee, is how governments make policy. “Climate programming and a lot of the policy is driven by ministries of environment, wildlife, and tourism,” she said. Planning is supposed to be coordinated across sectors, but health-oriented ministries are often underrepresented.

More collaboration between the two communities of practice could make their concerns more attractive to donors and governments. Rather than diverting climate funding to the health sector, Bremner said the goal is to have the two communities work together to increase the total funding they receive. In particular, he sees potential for raising money from funders concerned about building resilience. “Family planning, we really believe, could be instrumental in building resilience.”

With their combination of family planning, local conservation, and sustainable livelihood goals, one model for integration are “population, health, and environment” (PHE) programs, said Mutunga, which USAID has supported in various countries, including Ethiopia, Uganda, Madagascar, and the Philippines. PHE programs often have environmental goals that are related to climate adaptation, said Mutunga. By making this connection explicit, they could become eligible for money earmarked for climate and expand their impact. For example, said Hardee, it’s possible that with only minor modifications, PHE projects could be eligible for funding as Community-Based Adaptation Projects.

From Proposals to Reality

The first is to build awareness about the unmet need for family planning and its link to climate change. They recommend ensuring representatives from the health sector are present in national climate-compatible development planning and increasing the use of population and reproductive health data in measuring climate and resilience programming.

The second is fostering more dialogue and cooperation between sectors. The energy, transport, and climate communities were traditionally separated, said Ochs, but just as they are increasingly working together to curb emissions, the climate, health, and development communities need to do the same. That means creating regular opportunities for dialogue at all levels, from local to international negotiations and the Sustainable Development Goals.

Third, policymakers should identify and act on opportunities to integrate universal access to family planning into climate-compatible development strategies, including incorporating family planning into essential health packages and the policies of bilateral aid agencies such as USAID.

The working group hopes to make a strong argument for closer collaboration between the health, climate, and development communities, and provide policymakers and practitioners with a pathway from recognition to action.

“We have some good supportive policies at the national level, and even some county levels,” said Mutugna. “But now trying to link the policies into the programs is a challenge.” 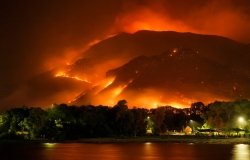 The Hill
Environment
We miscalculated our climate tipping points: This decade is critical