A Conversation with U.S. Special Envoy for Belarus Julie Fisher and Amb. Dirk Schuebel on Recent Developments, International Cooperation, and What Comes Next

In the past 18 months, the United States and its European partners have collaborated closely on addressing issues with Belarus - from a contentious election cycle, to subsequent widespread protests and crackdowns on civil society and media, to the migrant crisis on the Belarusian-Polish border.

On Nov. 22, we were joined by U.S. Special Envoy for Belarus Julie Fisher and Head of the Delegation of the European Union to Belarus Dirk Schuebel to discuss the migrant issue as a Lukashenka regime-engineered crisis, U.S. coordination with European partners on Belarus in the context of broader regional tensions, and implications of these developments for U.S. and EU policy.

“I think in the big picture the strategy question is most often on the minds of those of us who watched Belarus and Belarus-West relations for a long time, it’s kind of this repetition of history problem (right), the cycles. I was in Belarus as an OSCE (Organization for Security and Co-operation in Europe) election observer in 2010, and I remember the kind of raised hopes and expectations of the months leading up to that election then the regime’s repressive response creating new political prisoners, using those political prisoners as bargaining chips, cracking down on people protesting the kind of the hand-clapping protests the silent protests, the whole cycle.

Maybe there wasn’t some of the features that we’ve seen now that the hybrid attacks on neighbors et cetera, it’s a different geopolitical environment, but the question is really pretty straightforward and that is, compare if you will where we are now in the wake of another cycle of raised expectations and hopes and then crackdown and repression by the regime, compare that to last time and help us maybe understand why if this time is different. Why is it different in terms of what we should expect from the other side but also what we may be willing to offer because I think a lot of folks remember 2014, you pointed that out Ambassador Fisher, suddenly there was this breakthrough right and things started to get better again. So, I think it would be very useful to compare these two cycles if you could.”

“For our part, President Biden has said repeatedly human rights belong at the center of our foreign policy and we have to reassert our moral leadership on the global stage. Many who are taking part in this will know well that at the OSCE all participating states have made commitments with regard to fundamental freedoms and they’ve also agreed that adherence to those fundamental freedoms is a matter for all participating states. As of today, nearly all NGOs and independent outlets have been driven out of existence or into exile. More than eight hundred and seventy political prisoners languish in Lukashenko’s jails, being held for their independent views, their truthful reporting, or even something as simple as the color of their socks. Tens of thousands of Belarusians have been forced to flee the country. Millions of Belarusians are looking to and counting on the West to be their voice...and so therefore we will continue to speak out and respond to the regime’s violence. So, let’s be clear here it is the political crisis that Lukashenko has generated that has put individual Belarusians, the traveling public, and Belarus’s neighbors in harm’s way.”

“First of all, the first thing to say is we do not accept Lukashenko as president. We have made this very clear and look at the recent statement by the German government when still chancellor Merkel spoke to Lukashenko, the official statement says Mr. Lukashenko in no unclear terms and that is how we see him. We have been very clear also in our demands that we demand new presidential elections because we do not recognize these elections of August 2020 and that means we do not recognize him as a president, so I think since the fifth of November if I’m not mistaken in 2020, Lukashenko is no longer the president of this country. For any new president to be elected new elections would need to take place and these elections would need to be of course in conformity with international obligations and requirements observed by the OSCE (Organization for Security and Co-operation in Europe), et cetera.”

“First of all, I would not speak about marginalization. I think you see where Sviatlana Tsikhanouskaya, on which level she’s received, worldwide I should say. She met President Biden in October I think it was and she’s meeting heads of state and government throughout Europe basically with very few exceptions and that means she is recognized as a very important leader of the opposition and leader of the Belarusian people if you want. So I think to speak of marginalization of opposition is really not right it’s a different situation also in this respect. I think we have a different type of opposition, we have many more people supporting these people, these opposition figures. The opposition is widespread it’s not only a few dozen people it comes from all sides, from all levels of society. I think we have not the same situation and we have a strong support and this I don’t see (this) support waning, to be honest. I think particular Sviatlana Tsikhanouskaya has a big support of course.” 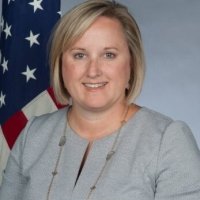 Head of the Delegation of the European Union to Belarus, European External Action Service (EEAS)