The Wilson Center and EMD Serono, a business of Merck KGaA, Darmstadt, Germany hosted an event focused on the gender and racial implications of COVID-19 with experts on topics around women and work, caregiving, gender-based violence, racism and sexism in healthcare, access to sexual and reproductive health services, pregnancy, the context of humanitarian settings, the female-led workforce of nurses and midwives, and the role and experience of men and boys during the current pandemic.

“While COVID-19 has wreaked havoc the world over, history has proven, and recent data agrees that the hardest hit will be the world’s women and girls and populations already impacted by racism and discrimination,” said Sarah Barnes, Project Director of the Maternal Health Initiative and Women and Gender Advisor at the Wilson Center, at a recent event on the impact of COVID-19 on race and gender inequities. Coronavirus has hurt women and girls in many ways. Among them, women have been pushed back into the home.  And healthcare workers and caregivers who are mostly women are jeopardizing their own health, caring for others.

While much of the attention around COVID-19 revolves around men due to their higher mortality rates, women play an outsized role in responding not only to COVID-19, but also to many pandemics, said Katja Iversen, President and CEO of Women Deliver. Women are 70 percent of the global health workforce and the majority of social workers and caregivers, said Dr. Maria Rivas, Chief Medical Officer at Merck KGaA, Darmstadt Germany and Senior Vice President of EMD Serono. And women deliver 70 percent of global caregiving hours. Women subsidize health globally: 50 percent of the care they provide, which includes work as vaccinators and community health workers, is unpaid, said Dr. Roopa Dhatt, Founder and Executive Director of Women in Global Health.

A common thread in the disaggregated data on the virus shows that some groups are disproportionately affected by the pandemic across the United States and worldwide. Statistics released by the Centers for Disease Control and Prevention show that 30 percent of COVID-19 cases are among African Americans, who make up only 13 percent of the American population. In New York City, black and Latino residents are getting infected and dying at twice the rate of their white counterparts. “Viruses don’t discriminate, but societies do,” said Dr. Dhatt.

Racism and Other Inequities

“The divide between those that are aiming to provide care and those that are in need of care has never felt wider,” said Dr. Neel Shah, Assistant Professor of Obstetrics, Gynecology, and Reproductive Biology at Harvard Medical School and a practicing OB-GYN in Boston. COVID-19 has exploited the way that racism in the United States has determined who receives health insurance and healthcare, said Dr. Joia Crear-Perry, Founder and President of the National Birth Equity Collaborative. In Louisiana, generations of low-income black men had no access to any kind of health coverage up until four years ago. “So, when a virus comes,” she said, “it also exploits the way that racism has racialized who would receive health insurance. Other countries can’t even imagine that the United States would racialize benefits like insurance, leaving out large parts of the population who look like me,” said Dr. Crear-Perry, who is black, because we believed that they were broken and not valuable. “So, we have an opportunity to stop doing that and to invest in healthcare for all that believe health is a right,” she said, “to be a country that really values all ethnicities, all languages, all genders.”

Often public health “best practices” shared on mainstream media are not truly “best practices” for groups who are already marginalized, said Dr. Dhatt. People in these groups see these recommendations as restrictions to further disenfranchise them and keep them in a lower socioeconomic status. When told to stay home, even if they show no symptoms, such people feel dismissed or ignored, said Dr. Shah.

We are seeing a “multiplier effect of burdens,” said Dr. Dhatt. The people who are most impacted by COVID-19 are also the people health systems have historically failed to adequately care for. These groups are more likely to have higher rates of noncommunicable diseases, which leaves them more vulnerable to COVID-19. And they are less likely to have health insurance or access to health services. Immigrant women are another group that tend not to have access to healthcare, said Zara Ahmed, Associate Director for Federal Issues at Guttmacher Institute. Non-citizens of reproductive age are three times more likely to be uninsured.

COVID-19 also increases risks for groups who are further marginalized by other factors. Reports of gender-based violence have risen due to the isolation from lockdowns and tensions in households due to financial and economic stressors, said Leyla Sharafi, Senior Gender Advisor of UNFPA. UNFPA’s data projects that for every three months of lockdown, we can expect 15 million more cases of gender-based violence. For women and girls who are further marginalized, like women with disabilities, refugees, and indigenous groups, the risks of experiencing gender-based violence is even greater. In order to protect these populations, services need to be flexible and adaptive to offer pathways for survivors to seek care, and safe shelters for women and girls must be deemed essential, said Sharafi.

The COVID-19 crisis is also threatening sexual and reproductive health and rights (SRHR), said Ahmed. Guttmacher Institute recently released estimates on how sexual and reproductive health (SRH) outcomes could change after a “modest” 10 percent decline in use of contraceptives in 132 low- and middle-income countries. In just one year, we could see 49 million more women with an unmet need for contraception, 15 million more unintended pregnancies, 168,000 more newborn deaths, and 28,000 more maternal deaths. “In the midst of this pandemic, bad policies and structural barriers may contribute to millions of people losing access to essential sexual and reproductive health services,” said Ahmed. As the largest donor for SRH programs globally, said Ahmed, the United States has a responsibility to pass legislation and fund global programs that ensure access to SRHR worldwide.

Maternal, sexual, and reproductive health and rights are essential, said Iversen. Yet in previous disease outbreaks, such as Ebola, global health programs saw money and healthcare workers diverted from maternity wards and reproductive health clinics. However, there is still a dire need for these services globally as women still need contraception, are still getting pregnant, and are still giving birth, said Iversen. “We know that dark forces are trying to use this situation to take our rights, our reproductive rights, away,” she said. “If we’re not careful, we’re going to lose a lot of ground.”

In order to address the inequities that COVID-19 has highlighted, leadership in governments and decision-making institutions need to be more representative, said Iversen. While women are 70 percent of the health workforce, they make up only 25 percent of senior leaders in global health, said Dr. Dhatt. Advocates are often told that “now is not the time” to address gender inequities, but the reality is that representative leadership has led to stronger COVID-19 responses worldwide, she said. Countries with the most efficient and effective responses like Denmark, Taiwan, New Zealand, and Germany are all led by women, said Iversen.

“Currently, we have to isolate people who are both symptomatic and asymptomatic which is effectively everyone. And isolating everyone takes all of the existing inequities in our society and it throws them into a pressure cooker,” said Dr. Shah.

Continue the conversation on Twitter by following @Wilson_MHI. Find more coverage of these issues on our blog, NewSecurityBeat.org/dot-mom. 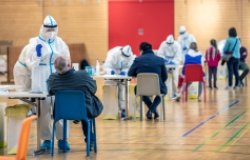 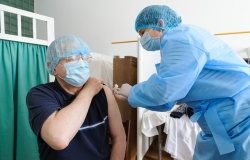 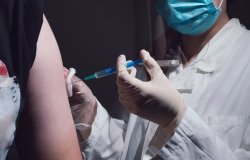 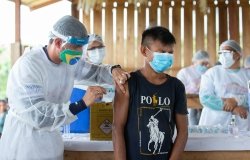