BY PHONE
Get Directions
This event will be made into an audio recording
Stream will begin in approximately —:—:—

On March 31, Ukraine will hold its presidential election. Three candidates currently lead in the polls: the incumbent President Petro Poroshenko, former Prime Minister Yulia Tymoshenko, and comedian and actor Volodymyr Zelensky. According to polls, it looks as if no candidate will garner more than 50% of the vote, resulting in a runoff election on April 21.

"When I teach my Ukraine class, I show maps of every past Ukrainian election, where you have Galicia going one way, the southeast going another way, and some kind of mishmash in the middle of the country. You have kind of Ukraine language versus Russian language; you have orange versus blue; and you also, to some extent, have youth versus pensioners, or sort of the populist vote for pension increases and things..."

"I think people who voted for him voted for him not only because they’re tired of the current administration, but they really do believe in their heart of hearts that Zelensky can actually shake things up. They view his inexperience as an asset."

"These election results show that Ukraine is a democracy. Anyone who is trying to say otherwise is clearly mistaken, because five years ago a candidacy like Zelensky’s would not have been possible. It certainly wasn’t possible in, for instance, Russia or even some other neighboring post-Soviet states currently, and this is a reality in Ukraine now…this is a strong beacon of hope, in my view, that Ukraine is continuing on its path to democratic reform."

"In order to report [Facebook] content that was either fake or went against Ukrainian election law in some way, they had to go through the same reporting process that every other user on Facebook does. Ukraine is the third-biggest market in the world for Facebook right now, behind only India and the Philippines, so I think that’s a huge dereliction of duty, it shows Facebook doesn’t really care about the market here, doesn’t care about the political situation and the impact that their product has on Ukrainian democracy."

"It actually unites Ukrainians even more, to get back to the narrative about a united Ukraine. On Zelensky’s Telegram channel the day after the election, he tweeted the map — which was not all filled in yet because not all polling stations were recording — but his team said, ‘Volodymyr Zelensky is uniting the country. Why is it so easy? Because we don’t divide people between right and left, Ukrainian- or Russian-speaking, these or others. We’re simply all together, we think with one language, the language of equality.’ So, I think if anything, his background is a uniting one."

"One of the things that I took away from the campaign and the first round of elections was that there was a lot of enthusiasm. In elections past, people here have felt as though they had to choose between several bad options, and now Ukrainians are, I’ve sensed, enthusiastic."

"I think this vote solidified the fact that the sort of traditional ‘two Ukraines’ theory and this East-West divide that we’ve seen in elections past, that being over. Despite what you read in a Washington Post op-ed this week, in nearly all past elections there was a clear divide that you could see between the country’s predominantly Ukrainian-speaking west and its predominantly Russian-speaking east. But Zelensky won overwhelmingly across the country, and no pro-Russian candidate finished in the top three."

"Zelensky is shaping up to be more or less the unifying candidate, while Poroshenko has pushed messages that have divided society, especially in pushing more nationalist messages. He also, I think, was hoping to get more support from certain groups that did not turn out well for him, the military being one of those. In special polling stations that were set up in Eastern Ukraine, for troops that are stationed near the front lines, he actually split the vote with Zelensky, which many people here were a bit surprised by and said that it exposed this myth that he is actually a popular commander-in-chief."

"For me, it was, the first question why this election, the election five years after the Euromaidan to have a lack of meaning. That was specifically interesting, why there was no discussion or debate? What did we achieve in five years after the revolution? How our political system is different? What are the offers by different candidate about the future of reform?…Right now, after the first round of election, there is definitely a hunger, a demand, on the public to have the sense of a debate."

"There’s definitely a candidate who is trying to include everyone into the group of his supporters, and the other one who is trying to fragmentize the voters and motivate only his group of support to come for the election. However, most probably will have from 55 to 60 percent of citizens coming for the next round. And the majority will most probably be for Zelensky." 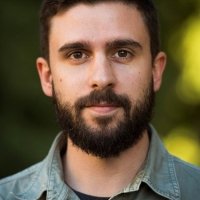