Controversies over the handling of Central American migrants at the U.S. border have overshadowed the factors that have driven them there. In this Ground Truth Briefing, our panel of experts examined those drivers and what is being done in response.

BY PHONE ONLY
This event will be made into an audio recording
Stream will begin in approximately —:—:—

Controversies over the handling of Central American migrants at the U.S. border have overshadowed the factors that have driven them there. The Trump administration’s stated policy in Central America is to address those drivers, pledging to help improve security, strengthen governance, and expand economic opportunity in the region.

How has this strategy been realized on the ground? What are the governments of the Northern Triangle countries – El Salvador, Honduras, and Guatemala – doing to address the underlying factors?

In this Ground Truth Briefing, our panel of experts examined the drivers of Central American migration today and what is being done in response.

“Not all people migrate immediately to the United States. There’s internal migration. People go to other countries. Not all of those that leave the Northern Triangle enter into the United States. Actually, quite a small number... And, the interrelationship between economic activity and opportunity and crime is often overlooked when we analyze these issues.”

“Whenever you focus on the Northern Triangle countries, the reasons for migration are entangled. First of all, you know that crime and violence are really high in the region. By itself, that is a cause for migration. 'I want to protect my family; I will move away from this place because it’s too violent for me and my family.' So, violence by itself is an explanation for migration. But on top of that, violence also affects economic activity and economic opportunities. No economic activity can flourish in a really high-violence environment."

“Even though the U.S. support is substantial, most of the effort has to come from within, from [the migrants'] own countries, from [their] own private sectors, and the other development partners… The issue is the coordination between the private sector… in generating economic opportunities outside the main cities in the region. That’s the important topic that needs to be addressed.”

“One issue here is that migrating is not cheap. The people who migrate are not the poorest of the poor. It is one who can get enough money, enough savings, to pay for the coyotaje to come to the U.S... The poorest of the poor, even though they are affected by malnutrition, that by itself does not trigger the issue of migration.”

“The gangs are more social animals than criminal. Their intentions and reasons for entering into the gang are largely social in nature; they’re looking for community. Granted, community is constructed around, and reinforced by, things like extreme violence and some criminal activities… but we have to think of these things as social in nature.”

“Let’s figure out early family intervention strategies. What we know about gangs and gang members is that they enter because they were abused, they were from violent families, they were from broken families. We are not doing anything, or putting any major amount of resources, into understanding those issues and dealing with those issues as a society, as a state.”

“Between 2010 and 2016, the number of refugees from the Northern Triangle quadrupled… but, at the same time, we see that there is an increasing number of pending cases, [the] so-called asylum- seekers, have increased by 42 times…What does this say? Underneath the numbers, we see that the migrants face extra challenges to acquire official status when violence is the primary motivation for migrating.”

“Why are we confronting this massive crisis? I think it is clear that it has multiple causes. It combines the need that migrants have to escape from the very high levels of violence, but also their governments' somewhat inability to deal with it.”

“We really need to do better in terms of concrete efforts to attack these underlying causes, because most of the time we are really just responding to emergencies. There are these longstanding problems related to structural inequality, gender inequality, poverty… It needs investment, and sometimes [that's] often less popular among governments.” 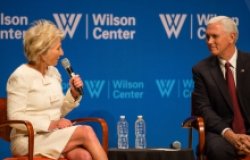