On July 14, the Rule of Law Lecture Series is pleased to welcome Judge Sergio Moro.

Investigations conducted by Brazilian federal judges, prosecutors and law enforcement officials in recent years have exposed what appear to be massive schemes of corruption involving political parties, leaders, major companies, business executives and operatives. The exposure of these apparent crimes by individuals in high places has changed public attitudes on criminal accountability and altered the country’s political landscape amidst a historic crisis of governance.

Federal Judge Sérgio Fernando Moro, from the Thirteenth Federal Criminal Court in Curitiba, in the state of Paraná, has emerged as a central figure both as the magistrate in charge of the ongoing investigations of corruption involving state oil company Petrobras and as a symbol of Brazilian societies mobilization against a culture of impunity that has prevailed until recent years.

On July 14th, Judge Moro will speak at the Wilson Center on “Handling Political Corruption Cases in Brazil.” His presentation is part of a lectures series on the Rule of Law in Brazil co-sponsored by the Brazil Institute and the Washington College of Law at American University. 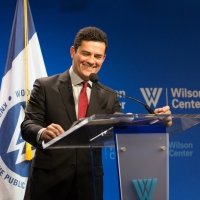