Scaling Up or Expanding Out? What Happens When Development Programs Grow

As is becoming clear, climate change, environmental degradation, population, and poverty alleviation are inextricably linked in many parts of the world.

As is becoming clear, climate change, environmental degradation, population, and poverty alleviation are inextricably linked in many parts of the world.

Efforts to address these issues, then, may be more effective if they take on more than one sector at a time. Such integrated development programs have been operating in countries like Madagascar and Uganda, where environmental issues collide with poverty and poor access to health services. Population, health, and environment (PHE) programs in both countries have been operating for years, serving isolated rural communities whose lives are entwined with threatened ecosystems.

As these PHE programs look to expand, however, challenges have arisen around replicability and funding.

Conservation and Family Planning in Uganda

Dr. Gladys Kalema-Zikusoka, founder and CEO of Conservation Through Public Health(CTPH) in Uganda, said they have had success promoting conservation alongside health and sanitation.

A veterinarian by training, Kalema-Zikusoka works with communities around Bwindi Impenetrable National Park to teach people how to engage with local wildlife and use natural resources in a sustainable way. Uganda is one of three countries where mountain gorillas are found, and Bwindi is home to about half of the approximately 880 mountain gorillas left in the world.

The gorillas’ survival may hinge on a better relationship with the people around them. Humans have been told they can’t enter the park, said Kalema-Zikusoka, speaking at the Wilson Center on October 14, but rapid population growth creates pressure to encroach on park lands and gorillas frequently cross the park’s border and into communities.

CTPH was initially focused only on gorillas, but after tracing cases of scabies back to contact with people, Kalema-Zikusoka decided they needed to work with human communities as well.

Integrating health and environment priorities was a matter of building on systems already in place, Kalema-Zikusoka said. The government created “village health teams” in 2001 as a way to reach rural communities, and “we taught the existing VHTs to do conservation,” she said.

Village health and conservation teams are trained to teach communities about constructive human-gorilla interactions as well as family planning, disease identification, nutrition, and hygiene practices. They improve water quality for humans, gorillas, and livestock, and provide health education to prevent the spread of disease.

The success of CTPH has helped bring family planning in particular to the national stage, she said. Uganda held its first National Family Planning Conference in July 2014, during which the president endorsed family planning as “good for the children…for the family welfare, and for the country.”

The biggest challenge to PHE is communicating effectively with donors from different sectors, Kalema-Zikusoka said. “Things are always changing on the ground…it’s a very dynamic sector. Conservation is very dynamic, public health is very dynamic, community development [is dynamic]. So it’s good that we have to keep educating the donors.”

Lack of sustainable funding can be a major setback, especially for those PHE programs that rely heavily on volunteers to spread the word about interactions between sectors. “Once the funding ended,” she said of one program near Bwindi, “then the volunteers were a bit demotivated because we couldn’t meet with them regularly…and then they eventually stopped doing the work.”

PHE programs that include income-generating activities tend to be more sustainable, she observed, since community members become more involved in the project. She mentioned a project funded by USAID’s Office of Population and Reproductive Health that gave community members goats and cows; once the project’s funding ran out, village health and conservation team members continued their PHE activities because they saw continued benefits, including income generation.

Building a Network in Madagascar

Blue Ventures, a London-based NGO, has been working on PHE programs in Madagascar for seven years. “People don’t live their lives in siloes,” said Caroline Savitzky, a community health program coordinator. “PHE addresses health, it addresses conservation, and livelihoods all together.”

Madagascar is known for being a biodiversity hotspot – 80 percent of its flora and fauna are found nowhere else in the world, Savitzky said. But population growth is rapid (expected to double by 2040) and communities depend heavily on local natural resources, especially fish, for their livelihoods. High levels of poverty (92 percent of Madagascar’s population lives on less than $2 per day), food insecurity, and poor access to basic health services strains households even further.

Blue Ventures works to provide viable alternative livelihoods to fishing through seaweed and sea cucumber farming, and educates communities about sustainable management of natural resources. But when they first arrived they also found a tremendous unmet need for contraceptives, said Savitzky. Since they started offering family planning through rural clinics in southwest Madagascar, the contraceptive prevalence rate for women in the area has increased five-fold, from just 10 percent to 55 percent, well above the national average.

But collaborating with others can help organizations break out of single-sector approaches, she said. “We’re looking at how partnerships can create more comfort in this as well as looking at ways that we can communicate PHE so that it’s clearly understood as an effective approach, rather than mission drift.”

We don’t see Blue Ventures as becoming this huge organization implementing PHE projects all over the place, but rather we see ourselves as being in a position to support other organizations, both large and small, that want to implement these models.

In the last year, Blue Ventures helped establish a partnership between Marie Stopes International, a global sexual and reproductive health organization, and the Duke Lemur Center, to better integrate health and conservation efforts in northeast Madagascar. They also helped found the Madagascar PHE Network, whose inaugural meeting was attended by representatives from 35 different health and environmental organizations.

Blue Ventures has also experimented with innovative ways to raise funds, said Savitzky, including eco-tourism expeditions to Madagascar and Belize, which not only help fund PHE activities but give people an opportunity to contribute to their research.

One avenue to expand PHE programs may be to look at ways it aligns with other multi-sectoral development efforts. Resilience is something nearly every development agency isnow recognizing as important, said ECSP’s Roger-Mark De Souza, and programs that help communities “bounce back” after shocks and stresses share many of the same tenets as PHE.

After Cyclone Haruna struck Madagascar in 2013, for example, Blue Ventures found itself in disaster response mode, distributing water sanitation kits, mosquito nets, and health care to villages that were 200 kilometers from the nearest city. Their close relationship with communities allowed Blue Ventures to respond faster and more effectively than an outside organization would have been able to, said Laura Robson in a New Security Beatpost.

De Souza heard similar testimony from a woman in Ethiopia participating in a PHE program. “When I asked Birhane about her experience working on PHE, she said to me that it really helped build her resilience as an individual and helped build her community’s resilience,” he said. “She spoke about having a sense of trust within the community, that the community that she lived in was able to mobilize itself, that she was able to access reproductive health and family planning services that led to her empowerment.”

Linking PHE with resilience could strengthen both efforts, as development organizations look to other models of holistic development to model resilience-building on and PHE programs look for ways to expand, said De Souza.

“The environment is right for scaling up PHE,” said Kalema-Zikusoka. As PHE programs work to reach more people, there’s an opportunity to learn from, build on, and achieve even more co-benefits from integrated development. 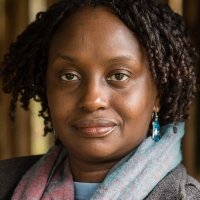