Venezuela’s Democratic Unity Platform and the Search for Democratization

In recent years, Venezuela has witnessed an economic, humanitarian, political, and social collapse. The COVID-19 pandemic has further devastated the Venezuelan economy, leading to even deeper poverty and deprivation.

In May 2021, numerous political parties and civil society organizations in Venezuela issued a call for a process of negotiations to “alleviate the suffering of our people, contribute to the re-institutionalization of the country, with an electoral timetable with conditions that permit Venezuelans to freely decide our future.” The announcement by the opposition Democratic Unity Platform thanked the government of Norway for its efforts to bring about negotiations as well as the international community for its support for a negotiated solution.

Can negotiations resolve Venezuela’s overlapping crises?  How can the international community best support the efforts to achieve a peaceful, democratic outcome in Venezuela?

Watch our discussion with leading representatives of the Venezuelan opposition about the prospects for, and path toward, a democratic outcome in Venezuela.

“We all need to keep unity around the issue of Venezuela. We hope that Venezuela does not become a problem that divides the opinion here in the United States, but that it’s an issue that unites. Because in the end what we need is a solution to a political problem that has become a humanitarian crisis.”

“Venezuela is a laboratory of the influence that these authoritarian regimes are taking in Latin America. And it’s very clear that all of these countries have different interests in Venezuela—China has and economic interest, Russia [is] more geopolitical with the military relationship that they have with the regime, Turkey… [has] a relationship through the extraction and refining gold, Iran with energy and military supply—but they all are supporting the dictatorship, and we believe that in order to have a successful negotiation one of the elements is to bring in these countries to the process. Because they are stakeholders, whether we like it or not, these countries are there and they impose a great deal of influence [on] the Maduro regime.”

“I believe… now there is a broader understanding in the world that what we are living inside of the country and what’s happening in the region is not because of two political factions that are unable to find a way out or two political factions that are too radical to recognize each other. Now everyone understands that it’s a dictatorship with all the control of the state forces and all the state institutions preventing the people [from] having food, from having medicine, from having civil and political rights.”

“There is a bad approach to certain parts of the conversation—in DC and Europe sometimes—that maybe Maduro is what we have and we should clean the cage, not try to open the cage to let the people out, and [instead] try to have better conditions but with Maduro. And that is simply impossible to do, because while Maduro remains in power, all the scaling up of assistance, all the access to international credit, all the insurance that the world economy needs from a country to be part of that financial system is not going to be in place.” 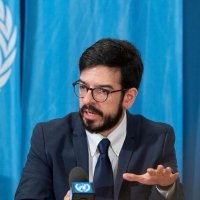 Special Envoy to the United Nations, Interim Government of Venezuela