The IMF and World Bank will be holding their first online-only spring meetings in response to the covid-19 pandemic. With prospects for global growth severely curtailed by the viral outbreak, expectations for international coordination and cooperation to ensure recovery followng the health crisis continues to rise. Join us to discuss the role the Bretton Woods institutions could play not only in stimulating growth worldwide, but also in supporting emerging markets from being particularly hard hit by the pandemic’s economic consequences, and redefining international cooperation amid greater challenges facing cross-border relations.

This event will be webcast on this page.  Questions may be submitted via email to asia@wilsoncenter.org or by tweeting @AsiaProgram.

Suman Bery is a Public Policy Fellow with the Wilson Center’s Asia Program. He is also a non-resident Fellow at Bruegel as well as a Global Fellow of the Mastercard Center for Inclusive Growth. Previously, he was the Chief Economist of Royal Dutch Shell, and he was also Director-General of the New Delhi-based National Council of Applied Economic Research. He was also with the World Bank, focusing on energy policy, financial sector reform, and the political economy of Latin America and the Caribbean.

Meg Lundsager is a public policy scholar at the Wilson Center. Previously, she was the United States’ Executive Director on the International Monetary Fund Executive Board from 2007 to 2014, where she focused on achieving effective IMF input into lending programs in Europe, securing adequate IMF resources, supporting low income countries, and strengthening IMF oversight of exchange rate policies.  As Deputy Assistant Secretary for Trade and Investment at the US Treasury Department from 1996 to 2000, she negotiated multilateral financial services agreements and aspects of China’s entry into the World Trade Organization.  She has an MA in International Economics from the University of Maryland and a BA from American University.

Shihoko Goto is Deputy Director for Geoeconomics with the Wilson Center’s Asia Program and the Senior Associate for Northeast Asia. She is also a contributing editor to The Globalist, and a columnist with The Japan Times. Prior to joining the Center, she spent over ten years as a financial journalist with Dow Jones News Service and United Press International. She was also a donor country relations officer with the World Bank. She received a BA in Modern History from Trinity College, University of Oxford and an MA in international political theory from Waseda University, Tokyo. 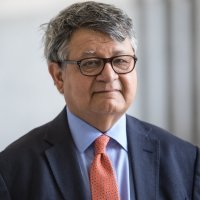