Women and COVID-19: A Conversation with Representative Alma Adams

“The pandemic has shown us in the starkest terms how wide the gaps are in health outcomes between Black and White America and between men and women,” said Representative Alma Adams (D-NC-12) at a recent Wilson Center event on women, race, and COVID-19 in the United States. “COVID-19 has revealed what the Black community and communities of color have known for a long time, health outcomes are further compounded by systemic and structural racism,” said Rep. Alma Adams. And COVID-19 has exposed what women have known for a long time. Gender inequality exists, it threatens economic empowerment, and it increases vulnerabilities.

It’s a trifecta—women are essential workers, there is gender-based violence at home, and women of color are more vulnerable to COVID-19, said Jane Harman, President, Director, and CEO of the Wilson Center. Women and girls are disproportionately impacted by the COVID-19 pandemic on a multitude of levels. “At the same time, women have also been revered as top leaders as countries tackle the pandemic, and characteristics of female leaders—like being collaborative, good listeners, and compassionate—have made positive impacts on politics and foreign policy conversations globally,” said Sarah Barnes, Project Director of the Maternal Health Initiative and Women and Gender Advisor at the Wilson Center.

A “crisis within a crisis”: Black maternal health in the coronavirus era

“Let me just spend a moment on an issue that I’ve been fighting for in Congress, one of the major public health crises of our time—that is Black maternal health,” said Rep. Adams. The United States is the only high-resource country to have an increasing maternal mortality rate, where Black mothers are 2.5 to 4 times more likely than White women to die from pregnancy-related conditions, regardless of their education level or socioeconomic status. “Moms in America are more likely to die in childbirth than mothers in any other developed country,” said Rep. Adams. “Research does tell us that cumulative stress of racism and sexism undermines Black women’s health, making them more vulnerable to complications that endanger their lives and the lives of their infants.”

“I’ve been fighting all of my life against racism and gender inequality because Black women experience a double impact of these harmful systemic issues,” said Rep. Adams. In March, Rep. Adams, alongside Rep. Lauren Underwood (D-IL-14) and Sen. Kamala Harris (D-CA), unveiled a historic package of legislation towards addressing Black maternal health disparities in the United States, the Black Maternal Health Momnibus Act of 2020. The Momnibus includes nine bills that fill gaps in previous legislation, such as making investments in screening for social determinants of health, including environmental risks, diversifying the perinatal workforce,  investing in telehealth services, and focusing on high-risk populations, including women veterans, incarcerated women, and Native Americans.

Women in the Workforce

“The pandemic has completely wiped out the historic job gains that women have made over the past decade… It took women longer than men to recover from the Great Recession and the impact of COVID will likely result in a similar slow recovery for women,” said Rep. Adams. Evidence from past epidemics, like Ebola, show that women have a slower economic recovery than men, said Barnes. In April, women accounted for 55 percent of the 22.5 million jobs lost in the United States.

Once representing the majority of the U.S. workforce, women are more likely to work in impacted industries, such as leisure, education, social, and health care sectors. “70 percent of the health workforce is female; over 70 percent of global caregiving hours are given by women and girls,” said Harman. “When you look at some of what we’re calling the essential workers, they’re women,” said Rep. Adams. And non-White women are more likely to be doing essential jobs than anybody else. The work they do has often been underpaid, undervalued, and an unseen labor force that keeps the country running, she said.

“The other reality is that many women in the workforce are also mothers,” said Rep. Adams. As schools and childcare remain closed, she said, “mothers are facing an impossible decision—choose between the job or my children.” Childcare is a crucial part of getting the economy going as women can’t go back to work with their children at home. High percentages of mothers, especially Black and Native American mothers, are the primary breadwinners of their families, but they still continue to face an over increasing wage gap. “We deserve equal pay for equal work,” she said, “working hard is not enough if you don’t make enough.” To address wage disparity, Rep. Adams co-sponsored the Paycheck Fairness Act and Raise the Wage Act.

“As a survivor myself of domestic violence, I know firsthand how important it is that we keep working to pass and strengthen legislation to improve services for survivors like the Violence Against Women Act,” said Rep. Adams. “We are finding that from the offset of the COVID-19 pandemic that there has been an increase in gender-based violence around the world,” said Barnes. 1 in 3 women will have experienced sexual violence at some point in their lives and it’s estimated that for every three months of lockdown, there will be an additional 15 million cases of gender-based violence.

“There are communities across the U.S. where laws are inadequate at protecting women from intimate partner violence and abuse,” said Rep. Adams. Alternative reporting mechanisms, maintaining vital sexual and reproductive health services, collecting comprehensive data on the gendered impact of COVID-19, and financing economic security measures for frontline and informal economy women workers are a few of the measures Rep. Adams said states can take to address increased gender-based violence.

The Role of Congress

“I believe that we’re experiencing a national reckoning and in this unique moment, I definitely see an opportunity for Congress, but also for our local governments to enact policies that begin to address our country’s greatest ills,” said Rep. Adams. “I see a tremendous opportunity for Congress and our society, as well to pursue transformational structural change because the system isn’t working for so many people, especially women and minorities, and it really is time to try to do something else.”

What is standing in Congress’s way of taking action on these issues? Over the past year-and-a-half Congress has taken numerous steps to address these issues, but over 300 bills are being held in the Senate. 80 percent of those bill have passed the House; over 200 of them with bipartisan support. “We’ve got to continue to impact Congress. We’ve got to ensure that good legislation gets enacted,” said Rep. Adams. Get out, protest, she said. “Come November, we’ve got to get out and make our voices heard in this election.”

Sources: The Atlantic, The Lancet, UNFPA, and U.S. Congress. 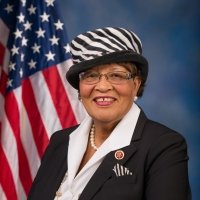