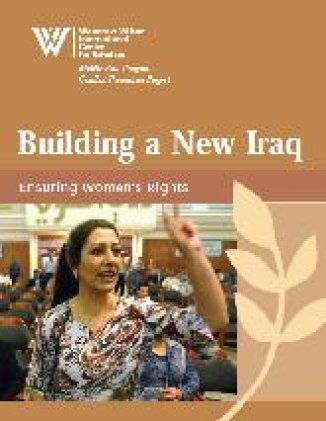 Since July 2004, the Wilson Center has organized four workshops held in Beirut, Lebanon, which have been funded by the United States Institute of Peace (USIP) and co-sponsored by the Centre for Women at the United Nations Economic and Social Commission for Western Asia (ESCWA). International experts, trainers, and facilitators from Arabic-speaking countries played an integral role in leading the workshops, which were designed to ensure that participants received training in  leadership, network development, political activism, conflict resolution, and the applications of international conventions. This publication describes related events in Washington, DC that the Wilson Center has organized with its colleagues, as well as each of the following workshops, outlining the priorities women have set during strategic planning sessions.

Building a New Iraq: Women’s Role in the Political Process On the Eve of the January 2005 Elections
Beirut, Lebanon
December 13–16, 2005

Building a New Iraq: Women's Role in Drafting the Constitution
Beirut, Lebanon
May 3–5, 2005

Building a New Iraq: How to Make the Constitution Work for Women
Beirut, Lebanon
September 19–21, 2005