Love Us As We Are: Khrushchev’s 1956 Charm Offensive in the UK 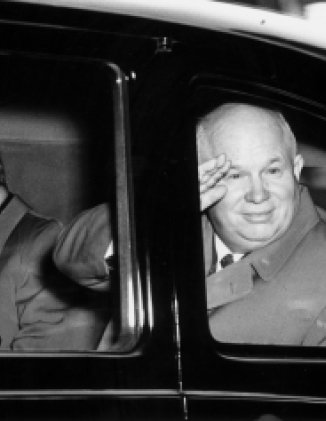 Love Us As We Are: Khrushchev’s 1956 Charm Offensive in the UK

For historians of the Cold War, 1956 rings with special significance. It was the crossroads of the 20th century, a meeting place of its many uncertain trajectories. The Soviet Union had mostly recovered from the devastation of the Second World War; its new leader, Nikita Khrushchev, beamed with confidence at the bright prospects of socialism, carried on the wings of Soviet science.  The successful test of the Soviet thermonuclear bomb in November 1955, and the ongoing Soviet efforts to pair nuclear warheads with ballistic missiles, added a menacing edge to Khrushchev’s international posture. But although the Soviet leader knew that he was now in possession of a terrible means of destruction, he realized, too, that a world war in a nuclear age could mean the end of civilization. Such sober thoughts encouraged Khrushchev to revisit the old Stalinist thesis that wars were inevitable. At the 20th Congress of the Soviet Communist Party in February 1956, Khrushchev offered a new approach: that of peaceful co-existence between the East and the West.

Fears of nuclear war did not blunt Khrushchev’s enthusiasm for revolutionary change around the world. Perceiving the global anticolonial struggle as a golden opportunity, the Soviet leader extended economic and military aid to struggling postcolonial regimes in Asia, Africa, and the Middle East. But even as Khrushchev eyed the mantle of the grave-digger of colonialism, tremors rocked the foundation of the socialist camp. Khrushchev’s denunciation of Stalin at the 20th Congress led to anti-Soviet protests in Eastern Europe. Things turned especially ugly in Poland and Hungary. Khrushchev refrained from intervening in Poland but chose to crush the Hungarian uprising. That intervention would cast a long shadow; in many ways, it was the beginning of the end for the socialist project. But, in early 1956, Hungary was still in the future, while Stalinism had already been cast aside. Khrushchev—ebullient, proud, hopeful—counted on an early end to the Cold War. It was this spirit that animated him, in April 1956, on his inaugural visit to the United Kingdom.

Khrushchev—ebullient, proud, hopeful—counted on an early end to the Cold War

This month marks the 60th anniversary of that maiden trip by Khrushchev and his sidekick Prime Minister Nikolai Bulganin. It was the first visit by a Soviet leader to the West since the proclamation of peaceful coexistence as the guiding line of Soviet foreign policy. Khrushchev and Bulganin, at the head of a large Soviet delegation that included figures of science and culture, arrived in the UK by boat on April 18 and stayed until April 27, 1956. They held exhaustive talks with their British hosts, notably with the British Prime Minister Anthony Eden, though they also dined with Winston Churchill, and had a confrontational and unproductive encounter with the leaders of the Labour Party. The Cold War International History Project has obtained detailed UK records of this visit, including Khrushchev’s and Bulganin’s memoranda of conversations with Eden and other UK statesmen [PDF version]. These records provide a tantalizing window into this stretch of the Cold War, so full of unrealized hopes, false promises, and missed opportunities.

The talks touched on a variety of issues—some would seem today like faint echoes of a different era; others are remarkably in tune with some of the problems that Russia still faces today in relations with the West. The German problem was discussed at length. The British lamented Khrushchev’s refusal to facilitate Germany’s reunification. Khrushchev, as he liked to do on occasion, promised to rain nuclear devastation on Germany in case of another war, but he also sought to encourage the West German chancellor Konrad Adenauer to engage in a dialogue with the East Germans. This, Churchill retorted in words that seem strangely prescient to the present-day reader, would be like forcing the Russians to negotiate with Ukraine or with Georgia. In any event, Khrushchev’s efforts to find a solution to the German problem on his own terms led nowhere: he resorted to ultimatums but, knowing full well that he could never start a war with the West over Germany, backed down every time, eventually deciding to build a wall in Berlin. In 1956 that wall was still years away.

This, Churchill retorted in words that seem strangely prescient to the present-day reader, would be like forcing the Russians to negotiate with Ukraine or with Georgia.

Another major subject of discussion between Khrushchev, Bulganin, and their British hosts, was the Middle East. It was here that the conversations were at their most candid. Eden made clear his concern with the Soviet bloc’s sale of arms to Egypt. He encouraged Khrushchev—again, in terms that would seem rather familiar to present-day readers—to desist from making a dangerous situation in the Middle East even more dangerous by offering one-sided support to the Arabs. Khrushchev refused, saying that any self-imposed restraint by the Soviets would be interpreted in the Middle East as a pro-Israeli move. In his turn, the Soviet leader lambasted the British for the Baghdad Pact (the 1955 pact bringing together Turkey, Iraq, Iran, and Pakistan, as well as the UK). Khrushchev’s major goal in the Middle East had been to sabotage the Pact by threatening its member states with the prospect of being at the frontlines of a nuclear war. Eden claimed the Pact was merely defensive, and highlighted the importance of oil: “We were dependent in our industrial life on outside supplies of oil. Without that oil we should have unemployment and we would slowly starve to death. Our Russian friends would understand that we were not prepared to allow that to happen.” For his part, Khrushchev insisted that the Soviet involvement in the Middle East was not related to oil, because the Soviet Union had more oil than it could manage.

Some of the most difficult exchanges concerned the problem of colonialism. Prior to their visit to the UK. Khrushchev and Bulganin made fiery anti-colonial statements, notably in India, Burma, and Afghanistan, where they toured in late 1955. Now, the British held them to account, defending their record of guiding colonies towards independence. Khrushchev insisted, however, that opposition to colonialism was a principle of Soviet foreign policy. After hearing of Khrushchev’s views on the problem, the UK Secretary of State for Commonwealth Relations (and future Prime Minister) Alec Douglas-Home noted, grimly: “Until I had talked to Mr. Khrushchev on the subject of Colonies and Commonwealth I had no idea how completely closed and prejudiced the human mind can be.” In his turn, Khrushchev had to fight off the British charge that the Soviet Union was itself a colonial power in Eastern Europe. “There was no analogy,” he said, “between colonial questions and the Soviet Union’s relations with these countries. These were based on equality and respect of national sovereignty. Since they had escaped from capitalist slavery later than the Soviet Union, the Russians felt compelled to help them economically.”

Khrushchev’s optimism about the future of the Soviet Union, they added, “seems to be unlimited.”

Perhaps the most interesting revelations of these documents come at the end, in the form of a psychological portrait of Khrushchev and Bulganin, written up by W. Barker and T. Brimelow, who accompanied the duo throughout the visit (Brimelow was the interpreter). Their conclusions, on the basis of two weeks of close observation and conversations, suggest that Khrushchev, whom they identify as the clearly dominant personality of the two, was at pains to make a good impression on his hosts. He was extremely sensitive to slight, and “very conscious of his dignity.” Khrushchev, they wrote, “lacks polish; his humour is often course; his speech often crude…. But he can state his views clearly and effectively.” “His expression is often one of cunning; less frequently one of impatient contempt. Outside the conference room, he proved to be arrogant, boastful and confident of his ability to outwit his opponents. With his son he was pleasant and kind.” “He was quick to reach agreement on matters which he did not regard as important: but on ‘questions of principle’—an expression which he was always using—he proved to be intransigent.” Khrushchev’s optimism about the future of the Soviet Union, they added, “seems to be unlimited.”

Khrushchev’s and Bulganin’s visit to the UK was an early effort on the part of the Soviet leadership to seek recognition and acceptance in the West. This was the Soviets’ moment of unfettered pride in their accomplishments, a moment of anticipation of yet greater feats. In one of their conversations, Khrushchev asked Eden to “love them as they were.” But he failed to win the recognition he coveted, the respect that he felt was due to him as the leader of a superpower. Again and again, Khrushchev had to fight back British accusations about the lack of political freedoms in the Soviet bloc. On occasion, Khrushchev exploded, as he did during a dinner with the Labour Party, when he was quizzed about the prison system in the USSR. “It was easier to discuss matters with the Conservatives,” Khrushchev grumbled afterwards, but in the end, he never did learn to “love them as they were”—not the Conservatives, not the Labour, not the West. The feeling of distrust and contempt was mutual. Khrushchev came to the UK hoping he’d take it by the storm with the promise of cultural exchange and trade. He left with a sense of nagging dissatisfaction. He later talked on many occasions about the UK, mainly in the vein of how many nuclear bombs it would take to wipe it off the face of the Earth.

“Would [the British] not welcome it, if the Supreme Soviet were to meet one day and proclaim that the policy of Socialist construction had failed and that they were reverting to private enterprise.”

In one of Khrushchev’s conversations with Eden, the discussion took an abrupt turn when the Soviet leader asked his hosts whether they “would not wish to see all Socialist countries disappear, if this could be brought about without war. Would [the British] not welcome it, if the Supreme Soviet were to meet one day and proclaim that the policy of Socialist construction had failed and that they were reverting to private enterprise.” Eden’s reply was a fine example of British understatement: “The Prime Minister said that he would have to think that one out very carefully.” Sixty years hence, Khrushchev’s unwitting prophesy has come to pass. Yet a much reduced and perhaps a little less menacing Russia still largely finds itself shut out from the West. Much as Khrushchev did in 1956, the Russian leadership is still looking for—but, alas, not finding—someone to “love them as they are.”

Sergey Radchenko is Professor of International Relations at Cardiff University, UK, and Global Fellow at the Woodrow Wilson International Center for Scholars.

Publication
Cold War
Khrushchev at his Most Khrushchevian
By William Taubman