Managing the Rise of China's Security Partnerships in Southeast Asia 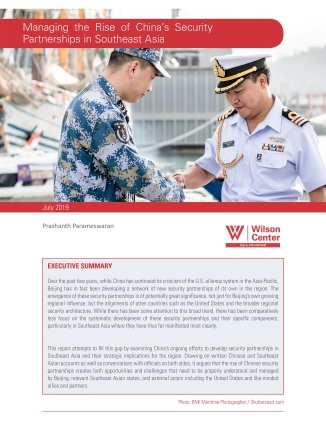 Over the past few years, while China has continued its criticism of the U.S. alliance system in the Asia-Pacific, Beijing has in fact been developing a network of new security partnerships of its own in the region. The emergence of these security partnerships is of potentially great significance, not just for Beijing’s own growing regional influence, but the alignments of other countries such as the United States and the broader regional security architecture. While there has been some attention to this broad trend, there has been comparatively less focus on the systematic development of these security  partnerships and their specific components, particularly in Southeast Asia where they have thus far manifested most clearly.

This report attempts to fill this gap by examining China’s ongoing efforts to develop security partnerships in Southeast Asia and their strategic implications for the region. Drawing on written Chinese and Southeast Asian accounts as well as conversations with officials on both sides, it argues that the rise of Chinese security partnerships creates both opportunities and challenges that need to be properly understood and managed by Beijing, relevant Southeast Asian states, and external actors including the United States and like-minded allies and partners.

Read more about this report on Asia Dispatches.

Managing the Rise of China&... by The Wilson Center on Scribd