Skip to main content
Support
Show
Live Now
Postponed in Observation of Juneteenth | Disease-Related Stigmas, Their Origins, Their Persistence, and Have We Learned Anything to Stop Them? A Comparative Look at HIV/AIDS and COVID-19
Explore More
Close
Collection
MENA Women Quarterly Report
Share on FacebookShare on TwitterShare via Email
Share
Part of the MENA Women Quarterly Report
Publication 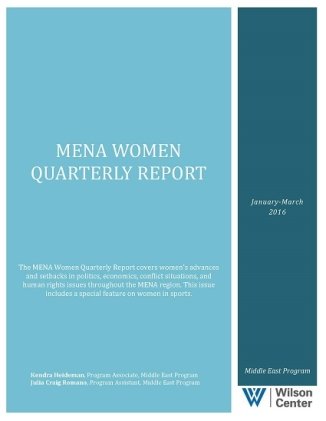 Arab women’s sports are “witnessing remarkable progress,” says Nada Al Naqbi, the Deputy Head of the Supreme Organizing Committee for the Arab Women Sports Tournament. This year’s tournament includes female athletes from 17 countries who will compete in events including basketball, volleyball, table tennis, fencing, and archery, among others. For instance, Saudi Arabia has seen growing numbers of female athletes competing around the world to “try to change stereotypes and show a different segment in Saudi Arabia.”

From the West Bank, there is a new documentary “Speed Sisters” that chronicles the first all-female racing team in the Middle East. From the Gaza Strip, there are numerous articles about Gaza’s only competitive female runner, 15-year-old Nofal, and reports about the cycling club for women that has garnered attention because “female cyclists are a fairly unusual sight throughout the Arab world.” From elsewhere in the region, there are stories about a competitive Iranian rock climber, Farnaz Esmaeilzadeh, and the only female Algerian football match official, Soumaia Fergani.

The Iranian parliamentary elections were by far the biggest story about women’s political participation in the MENA region during the first quarter of 2016. In late February, 14 women were elected to Iran’s Majles during the first round of parliamentary elections in late February. However, in March, the Iranian Guardian Council nullified the victory of Minoo Khaleghi, one of the women elected to parliament. The Guardian Council did not provide an explanation for this decision and had previously vetted her to participate in the 2016 elections. The Guardian Council also disqualified approximately 800 of the more than 1,200 women who had registered to run in the 2016 elections.

Run-off elections in late April will determine if more women will join the now 13 women who will serve in the tenth parliament. Nine women—3.1 percent of the legislators—have served in the ninth parliament since 2012; the fifth Majles holds the record for highest number of women serving in the Majles at once: 14.

Despite this progress, women in the Majles continue to face discrimination; the incoming women parliamentarians will have to work with MP Nader Qazipour, who was recorded in March saying, “Parliament is not the place for donkeys and foals, monkeys and women,” a comment for which he later apologized and attributed to being “carried away by the jubilation of the election among my supporters.”

One of last quarter’s biggest stories on women’s issues, the election of 21 women to Saudi municipal councils, led to several new developments throughout the last few months. At the first Jeddah municipal council meeting, the two newly elected women councilors were told they had to sit separately from their ten male equivalents, to which they refused. After an hour of “heated argument,” the meeting began with all 12 councilors sitting at the same table. The following month, however, the Saudi government announced that women councilors could no longer be in the same room as male council members and could only participate through a video link.

Women in public service in the UAE fared better than their Iranian and Saudi counterparts during this quarter. Seven women will serve on the 42-member Sharjah Consultative Council; six of these women were appointed by the Emir of Sharjah, Sultan bin Muhammad Al-Qasimi, and one, Fatima Ali Al Muhairi, was elected to the position. Additionally, due to a reshuffling, eight women have been appointed to positions on the UAE federal cabinet, where they now occupy more than a quarter of the posts. Some of the new women ministers include the Minister of Happiness and the Minister of Tolerance.

A number of articles during this time period focused on the harassment of women journalists and the role of media in either perpetuating or exposing harassment against women. Three female Turkish journalists discussed the “rampant sexism” they experience through threats, attacks, insults, and other forms of harassment. In addition, a female Iranian journalist shared how she was sexually harassed at Press TV, an Iranian TV station. In Egypt, a TV talk show was suspended after a guest said “disrespectful remarks” about women, saying almost one-third of wives are unfaithful. Separately a female TV presenter in Egypt was jailed for blaming a sexual assault victim for provoking the attack by wearing “revealing clothes.” Media can also have a positive function: Israeli women are using social media to reveal sexual harassment, and female entrepreneurs have launched Harass Tracker, a reporting tool for sexual harassment in Beirut.

Another significant topic during this quarter dealt with women’s rights related to marriage and divorce. Egypt’s “tourist” or “seasonal marriage” law—which mandates that foreign men pay to marry Egyptian women more than 25 years younger—has continued to generate controversy because the Justice Ministry increased the amount men are required to pay. The Ministry indicates the law is designed to protect Egyptian women while others say it “formalizes sex trafficking.” Another article details Israel’s “chained women” whose husbands deny them a divorce as a result of the country’s use of Jewish law. Gazan women also have fewer legal rights related to divorce following a new law passed in the Higher Sharia Court Council. One positive development to note is recent legislation that allows women in Turkey to keep their maiden names after getting married.

News about the treatment of women in ISIS-controlled territories remains the focus of articles regarding women in conflict situations. A number of articles report that ISIS stoned four victims of rape to death in Syria for "committing adultery" after being raped by ISIS fighters and stoned two teenagers for allegedly committing adultery. ISIS also executed a female citizen journalist in Syria for “espionage” and burned three women to death in Mosul for similar espionage charges related to leaking security information. The women that ISIS still holds captive as sex slaves have been subjected to “virginity tests” and forced to take birth control in order to keep women as sex slaves and avoid pregnancy. Reports also indicate that women from Bangladesh and Nepal have been trafficked to Syria to serve as sex slaves and domestic servants. Videos taken by two Syrian women in Raqqa show what life is like for women under ISIS rule. In March, U.S. Secretary of State John Kerry said ISIS is responsible for committing genocide in its actions against Yazidis and other minority groups, but some have called for the designation of femicide for the terrorist group’s systematic targeting of women.

Many articles this quarter also detailed the toll that ISIS and the Syrian conflict have had on women. According to Babatunde Osotimehin, executive director of the U.N. Population Fund, Syrian women suffer from rape and seek abortions as a result of the country’s civil war. Amnesty International reported that Syrian refugees in Lebanon “face heightened risk of exploitation and sexual violence.” In spite of such increased vulnerability, these women refugees also shared their personal stories of resilience and how they became breadwinners for their families. The Syrian women who remain in their home country often take up professions that were once restricted to and dominated by men because so few men remain. Women in Iraq have also taken on non-traditional roles of “providers and protectors” as a result of war.

Despite such disheartening news about women in conflict over the past few months, there are several important positive developments related to women and ISIS. For example, Iraq nominated a Yazidi woman for the Nobel Peace Prize; Nadia Murad escaped from ISIS and works to highlight the suffering of women who are still in captivity. More than 50 Yazidi women and children were released by ISIS in a prisoner exchange with the Kurdish YPG forces. In March, Germany opened shelters for women and children who escaped from ISIS to support some of the 2,500 estimated victims. Moreover, the numbers of Syrian Kurdish female fighters who are fighting against ISIS are increasing.

Entrepreneurship serves as an important tool for women in the Middle East entering the labor market. Women throughout the region have been enormously successful at entrepreneurship: Turkey’s wealthiest businesswoman— Mevlüde Uygun, the CEO of a baby clothing empire—is an entrepreneur who started her company with a small business loan from the state. Women in Saudi Arabia are increasingly becoming entrepreneurs through online enterprises, which allow them to establish thriving businesses within the limits of a society that constricts their mobility and interactions. Additionally, 32 percent of Qatari women interviewed for a study by A.T. Kearney stated that they have “start-up intentions.”

Women from the region have also looked to STEM as a key to success in the labor market. Twenty-one percent of workers in the UAE’s nascent nuclear sector are women. One article from the last quarter indicated more than 20 percent of Turkish code writers are women, while another noted that women in Oman are contributing to research in STEM fields. These last two articles told a similar and disheartening—and nearly universal—story: while young women are increasingly outperforming their male counterparts in school in terms of both grades and numbers, this success is not carried over into the workplace, where women face discrimination. As a senior International Labor Organization official recently said, labor issues for women in the Middle East are exceedingly similar to those faced by women throughout the world.

Other stories from this past quarter discussed some of the obstacles that women in the Middle East face in the labor force. In Morocco, 78 percent of women surveyed for a study from the Forum Azzahrae for the Moroccan Woman stated that they were “frustrated” at work and most of the women interviewed received “little to no help managing the household after returning from their day job.”

The MENA Women Quarterly Report will continue to report on women’s progress in business, and other news stories that affect women in the region, in the months to come.