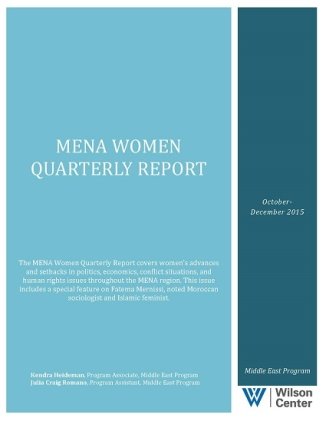 Feature: The Life and Work of Fatema Mernissi

Fatema Mernissi, the noted Moroccan sociologist and Islamic feminist, died of cancer on November 30, 2015 in Rabat. Mernissi is known globally for her numerous publications on Islamic feminism, politics, human rights, and her personal experiences, including “Beyond the Veil: Male-Female Dynamics in Modern Muslim Society.” She was a faculty member for decades at Mohammed V University in Rabat, where she also completed some of her education. She received a Ph.D. in sociology from Brandeis University in 1973.

“Fatema Mernissi’s work is pioneering in understanding the relationship between women’s issues and the state in the Arab-Islamic countries, as well as the relationship between these issues and West,” wrote Wilson Center Fellow Fatima Sadiqi. “She was a genuine visionary in predicting that no headway could be achieved on the road of democracy without involving women as agents in decision-making. She used her vast knowledge of Islam to show that the problem is not Islam but the way this religion is instrumentalized by rulers and patriarchs. As such her legacy is transnational. Mernissi was an inspiration for me not only with regard to women’s issues but also with regard to identity and Berber issues. I know I lost a unique mentor and a special friend.”

Numerous articles from the last few months highlighted the prevalence of violence against women throughout the MENA region. In Turkey, the number and brutality of violent acts against women have increased in the last decade, and on December 3 three men were sentenced to life in prison for murdering a woman who resisted their attempt to rape her. A number of other reports detailed cases of rape and sexual violence: the UAE has imprisoned victims of rape as a result of laws banning extramarital sex; an Israeli court sentenced a convicted rapist to community service, prompting outcry from women’s groups; and an NGO documented 20 instances of rape against female political prisoners in Egypt. Female prisoners in Iran have also been subjected to violence: a juvenile offender was hanged for murdering her husband and another underwent a forced “virginity test” due to allegations of “‘illegitimate sexual relations’ for shaking hands with her lawyer.” Some countries are implementing measures to combat violence against women: Algeria recently adopted legislation that protects women against violence, and Egypt introduced a sex education program to “serve as an introduction to address violence against women.”

Another notable topic in this quarter related to issues of personal status, family laws, and women’s legal rights. In Morocco, for example, the National Human Rights Council (CNDH) called for a review of the country’s family code because of the inequality between men and women in inheritance matters. Lebanese women have protested for the right for women married to foreigners to pass citizenship to their children. A Jordanian artist depicted the controversial article in the country’s penal code related to rape, calling for its elimination. Positive developments related to women’s legal rights include the Tunisian parliament passed new legislation that allows women and their children to travel without permission from the children’s father, and Saudi Arabia will provide expanded legal powers to divorced and widowed women.

Despite ongoing concerns regarding violence against women and women’s legal rights, there have been several constructive extra-legal efforts related to improving human rights. In the past quarter, Egypt has launched an anti-female genital mutilation plan, anti-sexual harassment training for Uber drivers, women-only buses, and other “progress in the fight against sexual harassment.” Turkey introduced individual park seats for women. Saudi Arabia provided free taxi rides to women for breast cancer screenings. An Iranian court issued a single exit visa to football captain Niloufar Ardalan, overruling her husband who previously prevented her from traveling.

Four elections in the MENA region made headlines in the past few months.

Saudi Arabia’s municipal election on December 12, 2015 was particularly notable because it was the first in which Saudi women were permitted to vote and run for office. According to Saudi officials, 130,637 women registered to vote and 979 women ran for office (comparatively 1.35 million men registered to vote and 5,938 men ran for office), and women won 21 of the 2,100 municipal council seats throughout the kingdom. Women candidates were professors, businesswomen, architects, and activists, including Loujain Hathloul, who was jailed for 10 weeks for driving and was initially banned from running for office.

Women who ran for office in Saudi Arabia faced some challenges during their campaigns. Women candidates could not campaign face-to-face with male voters, and had to designate male representatives to campaign in their places. To overcome this obstacle, women utilized social media extensively to connect with their prospective constituents.

The United Arab Emirates also made history when Dr. Amal Al Qubaisi was elected in November the President of the Federal National Council, a position equivalent to speaker of parliament. She is the first woman speaker in both the UAE and the greater Arab world.

Egypt’s elections, which took place in two phases during the last quarter, established the first parliament since President Abdul Fattah al-Sisi took office in June 2014. Women won 73 seats, surpassing the quota of 70 seats. This was an increase from the 12 women elected to Egypt’s parliament in 2012. According to Daily News Egypt, some of the newly elected women legislators are considering forming a bloc to “to support the women’s experience in the parliament.” These parliamentarians have already held four meetings to “empower women” in the Egyptian legislature and discuss issues such as obtaining diplomatic passports for their husbands and accessing stipends for transportation and overnight lodgings.

On November 1 Turkey held parliamentary elections for the second time in 2015. In the June elections, women won 98 of the 550 seats in parliament, the highest number in the country’s history. In the November elections, the number of women elected decreased to 82. Some have criticized the gender disparity in the election’s results; Filiz Kerestecioglu, a parliamentarian from the People’s Democratic Party (HDP), stated, “Although we tried to change the face of the parliament by increasing female representation, sadly we failed as a result of the system’s male-dominated policies.”

Activists have also criticized Prime Minister Ahmet Davutoğlu’s cabinet for “limited” women’s representation and the subject matter of their portfolios. Two of the 26 ministers on the Prime Minister’s cabinet are women—the ministers for Family and Social Policy and Environment and Urban Planning. “Even in politics, women are placed in charge of the ‘private sphere'—i.e., the family, the home, the compassionate side of the state. Women have a voice and ideas beyond the Ministry of Family and Social Policy,” said Şehnaz Kıymaz Bahçeci of the Women for Women's Human Rights-New Ways Association.

Only one woman was elected to Oman’s 85-seat Shura Council in the October 2015 elections. Nemah bint Jamiel bin Farhan Al Busaidiya was reelected to her current position and was the only woman who served in the previous Shura Council. Of the 590 candidates in the election, 20 were women.

Iran will hold elections on February 26, 2016 for two representative bodies—the parliament (Majles) and the Assembly of Experts. Currently, nine of the 290 lawmakers in the Majles are women. Registration for candidacy for both bodies took place in December; women represent 12 percent of registered candidates for the Majles elections and have also registered for candidacy in the Assembly of Experts elections. The question remains about how many women candidates will pass the extensive vetting process and appear on the ballots in February.

Articles about the violence ISIS perpetrates against women in Iraq and Syria continue to dominate news about women in conflict situations. Reports indicate that "hundreds” of Yazidi women have killed themselves while in ISIS captivity; ISIS executed hundreds of women in Mosul, Iraq; and a mass grave of dozens of Yazidi women killed by ISIS was discovered in northern Iraq. ISIS has also "forced pregnant Yazidi women to have abortions,"closed women’s clinics in Raqqa so male gynecologists do not treat women, and issued an “extremely detailed ruling on when ‘owners’ of women enslaved by the extremist group can have sex with them.” A number of articles profiled women who escaped ISIS, including a Yazidi woman held captive in al-Baghdadi’s house, a Yazidi woman held captive as a sex slave by an American ISIS recruit, “accounts of brutality and duplicity that paint a never-before-published account of slavery under ISIS,” and narratives from former al-Khansaa Brigade members who escaped ISIS.

Because of recent events in Paris and San Bernardino, there were more articles in this quarter examining women’s roles in violent extremism. Many articles detailed women's involvement with ISIS, including the recruitment efforts women are engaged in or succumb to. According to the Tunisian minister for women’s affairs, approximately 700 Tunisian women have traveled to Syria to join ISIS and other extremist groups. Tunisia arrested seven women for posting ISIS propaganda on the Internet and later dismantled a cell that was recruiting young women to marry extremist militants. In Saudi Arabia, 23 women face terrorism charges for their association with ISIS and al-Qaeda.

Outside Iraq and Syria, women are actively involved in conflict in Yemen, Libya, and the Palestinian territories. Yemeni women, for example, have protested the Saudi-led campaign with a rally in Sana’a, taken up arms as part of pro-government forces fighting the Houthis, and called for their inclusion in peace talks. Although Yemeni women are actively involved, “conditions for Yemeni women and girls are deteriorating” as the conflict continues, according to the UN Population Fund. A group of Libyan women drafted a Minimum Women’s Peace Agenda for Libya to ensure gender equality in the constitution, women’s political representation, and laws to protect women’s rights. In the West Bank, women and girls have joined the front lines by hurling rocks, and represent approximately 20 percent of Palestinian attackers.

News from the past few months also includes stories of women working for positive change in conflict areas. Yanar Mohammed operates a secret network of five safe houses for women in Iraq and hopes to open a sixth safe house for Yazidi women who have escaped ISIS; she has also called for Iraqi lawmakers to legalize women’s shelters, which legally can only operate in Iraqi Kurdistan. Two articles detail how Syrian women refugees are employing culinary skills to support their families in İzmit, Turkey and finding refuge in a Sudanese kitchen as part of project that supports Syrian refugees. Another underscores how young women and “grassroots activism is helping to tackle radicalization at its most toxic.” As part of a UN initiative, Scotland will host an international women’s summit to train Syrian women in conflict resolution.

Women continued to have mixed experiences in business in the MENA region during the past several months. Saudi women have found success in launching their own businesses from the ground up and will have the opportunity to work in a variety of fields in four new industrial cities that will be built for women only. In November, the Saudi Ministry of Labor removed the clause that it added during its original ratification of the International Labor Organization’s (ILO) labor law that stipulated that women must be protected from “hazardous and dangerous jobs.” However, in December, Saudi Arabian Airlines declared that it “will not employ Saudi women as air hostesses on its flights,” but will allow women to work in “female customer service sections in the airline’s reservation offices, commercial or financial sector, or IT departments.”

Women throughout the region—from Iran, where 70 percent of science and engineering students are women, to Egypt, where a program developed by the national bank and a new employment law support women’s economic participation, to the UAE, where women hold over 66 percent of government jobs—are positioning themselves to be more influential and powerful members of the workforce. The MENA Women Quarterly Report will continue to report on women’s progress in business, and other news stories that affect women in the region, in the months to come. 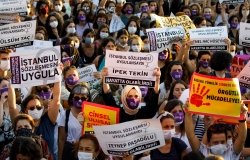